A decade after the Great Recession a lot has changed in financial services. But much has also stayed the same. Not including regulator-enforced bank rescues, league tables of the largest financial services organisations in Europe, and across the Middle East and Africa, are much the same as before the crash.

Despite a dent to revenues, and share prices between 2008 and 2010, global bank market capitalisation has grown nearly 50% in the years since. Trust in banking has also bounced back – UK consumers’ trust in banks is at the same level as high street retailers.

At a time when the number of bank branches in Europe has declined by a fifth, and the number of banks by nearly a quarter, since 2008. But all is not quite as it seems. As banks have declined, numbers of new entrant FinTechs have swelled – estimated to be anywhere between 5,000 and 12,000 depending on your definition. Including several thousand across Europe, the Middle East and Africa.

Plenty have gone on to become scale players. From mobile money providers in Africa – a global pioneer – to advanced payments services and challenger banks in Europe, fintech as a sector and a mindset has proved it’s here to stay. 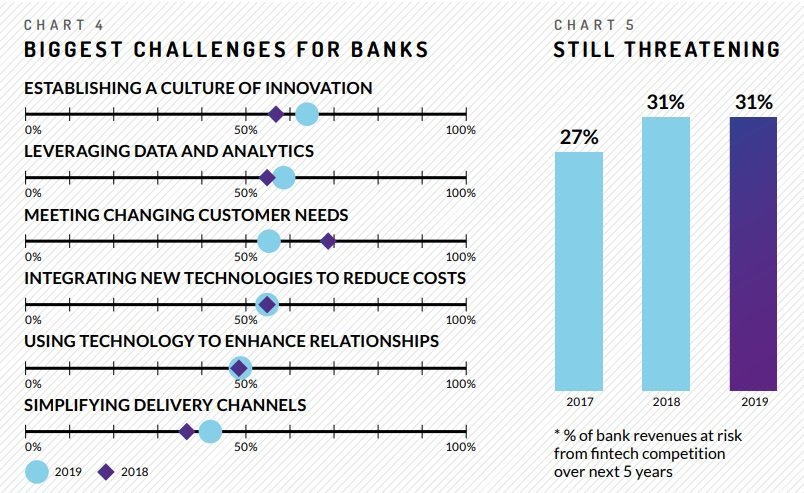 over traditional industry channel or distribution metrics. And where the best prospects of success are in enabling commerce in its broadest sense over the selling of margin-first products.

FinTech’s ‘no legacy’ advantage is no longer a given. Progress will be determined by an ability to respond to new technologies and emerging regulations and to scale the organisation accordingly. Whether the question is where to draw the line between data use and abuse, or how to scale an organisation for inevitable change, FinTech s will struggle as much as banks to provide the answers. A failure to do so could quickly turn the building blocks of the new road into potentially fatal roadblocks.

In a break with tradition, this year’s research abandons a now arbitrary conflict between FinTech innovators and incumbent banks. Four years into the FinTech journey behind this report, the distinction between them is no longer so helpful, particularly as larger technology firms trying to drive their own re-positioning efforts are also calling themselves FinTechs.

Mainly though it’s because rapid advances in technology like artificial intelligence, and new regulations on data and data-sharing, are opening a new chapter – for regulators as much as for innovators and traditional institutions.

It’s a chapter defined by the questions it poses – and to which no side has the answers. As the report explains, all sides will have to work together to come up with them. When it comes to data in particular, confronting opposing perspectives – of its value, of how to use it and who should own it – could grow the market for financial services at the same time as it improves customer safety.

This report identifies four building blocks of a new FinTech road. Although not individually new, a combination of economic and regulatory pressures, and accelerating technological change, will sharpen the attention of providers of all sizes on them in the decade ahead.