From 2014 to 2019, payments revenues in Asia-Pacific grew at an average annual rate of 9.3%, far higher than the global average. Over the next five years, revenues will continue to rise but at a slower rate. Under our quick-rebound scenario, industry revenues are likely to rise by a CAGR of 7.3% from 2019 to 2024. Given the region’s diversity, we see markets falling into three broad clusters: 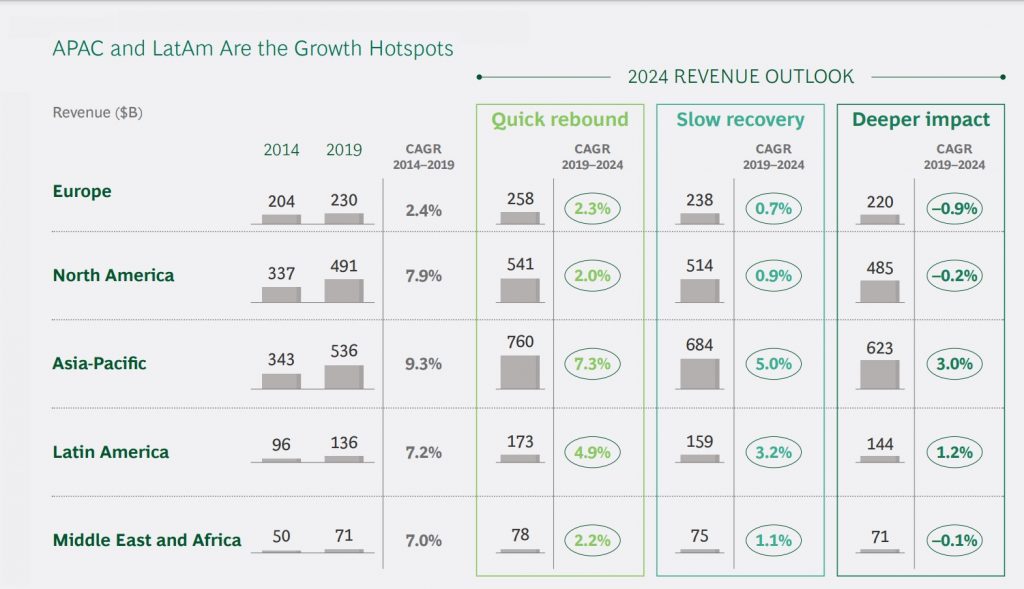 Overall, however, Asia-Pacific remains a hotbed of payments activity. Large merchants have become major digital payments players in their own right, more so than in other regions.

Examples include Alibaba in China and PhonePe (owned by Flipkart) and Amazon in India. Taking a page from these giants, ambitious entrepreneurs are applying a “land and expand” strategy, anchoring the business in a key niche and then building rapidly into adjacent services.

Grab, for instance, began as a ride-hailing app in Malaysia and followed that up with an expansion into mobile payments, cards, and financing. The company is now competing to acquire a banking license in Singapore and Malaysia.

South Korea’s Kakao followed a similar path, beginning as an instant messaging and gaming provider, then moving into mobile wallets and payments before becoming the country’s first internet-only bank in 2017.

Some countries are also emerging as local payments champions. Indonesia, for example, is fast becoming a major innovation hub, especially when it comes to addressing the needs of Southeast Asia’s large unbanked populations. The country has launched five unicorns in the past several years: Gojek, Ovo, Tokopedia, Traveloka, and Bukalapak.

In other countries, regulators have fueled innovation. The introduction of the United Payments Interface (UPI), for example, revolutionized the payments infrastructure in India.

Since its launch in 2016, the UPI has become the country’s most widely used payments service, with transaction values growing at a dizzying rate of 469% annually, compared with just 39% for mobile payments and 23% for credit cards. The UPI’s interoperability has allowed both foreign tech giants and local e-commerce players to enter the market and build intuitive payment apps targeted at merchants and consumers.

From 2019 to 2024, payments revenues in Latin America could grow by as much as 4.9% annually, a rate that is second only to Asia Pacific—albeit from a much smaller revenue pool. Drivers include e-commerce innovation and efforts across the region to promote greater financial inclusion.

Digital wallets are becoming a sizable force as top players consolidate their pan–Latin American presence. Mercado Pago, for example, hopes to expand its eight-country foothold in the region with campaigns to enter new markets such as Chile.

To date, these merchant-led digital wallets have focused on a core set of applications such as food delivery and e-commerce. But regional banking initiatives like the instant payments system PIX developed by Brazil’s central bank and a new electronic-payments platform called Modo from a consortium of Argentinian banks could open up new opportunities.

Incumbents are also investing in innovation. For example, Itaú in Brazil is scaling up its own wallet, Iti, and digital giants such as WhatsApp are becoming more active in the region.

In the merchant-acquiring space, the region is seeing a shift away from the single-brand model. This began in Brazil in 2010, spread to Argentina and Chile, and is expected to extend to Peru and Colombia.

The region is now moving toward a multi-brand competitive market paradigm, opening competition for third-party players and integrated software vendors (ISVs), including Naranja X and Todo Pago in Argentina, Izipay and VendeMás in Peru, and CompreAquí in Chile.

A more competitive market could challenge the dominance of some incumbents and lead to greater M&A activity.

From 2019 to 2024, payments revenue growth across the region is likely to peak at a CAGR of 2.2% under a quick-rebound recovery.

In the Middle East, crisis-related headwinds such as falling oil prices, a slowdown in tourism, and a spike in expatriate migration have slowed economic growth and led to more cautious consumer spending.

Although payments revenue growth will remain somewhat muted as a consequence, electronic transactions have seen a surge in interest. A survey commissioned by the government in Dubai found that 71% of consumers in the United Arab Emirates increased their use of digital payments for in-store shopping since the start of the pandemic and 49% shop more online, with 61% of them using cards and digital wallets. More SMEs are also accepting contactless payments.

To support economic growth, both Saudi Arabia and the UAE plan to launch real-time payments infrastructures sometime in 2021 or early 2022. In addition, countries like the UAE are allowing more international payments players to enter the market. These shifts will push revenue growth higher in the medium to long term.

Africa has its own market characteristics. Historically, cultural norms and the fact that 65% of the population is unbanked contributed to a heavy reliance on cash across the continent. But this is changing.

As with the Middle East, government, bank, and nonbank payments players are promoting the use of digital payments through consumer education, reduced transaction fees, and product innovations.

Roughly 60% of the African mobile payments market is captured by telco-led solutions. Over the past decade, for example, Kenya’s M-Pesa has come to dominate the mobile payments space in that country and has become the most prominent telco-led mobile money solution across Africa.

In Ghana, MTN has achieved strong market penetration with its innovative customer-to-customer offerings. Orange Money has done the same in the Ivory Coast. Telcos have also developed attractive business services, including a leading cross-border remittance solution between Ivory Coast, Mali, and Senegal.

Although banks and non-telco-led payments solutions are not common in Africa currently, the opportunity is huge. The estimated potential market for banks in sub-Saharan Africa is $500 billion, nearly all of it in the form of P2P payments.

Transactions using mobile payments total roughly $300 billion annually across the continent and are expected to more than quadruple, reaching $1.3 to $1.9 trillion in 2025.