ExpertMarket has released a new ‘tap map’ revealing the contactless card limits for 49 countries around the world. More of us than ever before are choosing to pay via contactless card over chip and PIN or cash.

In fact, UK Finance estimates that over two-thirds, (63%), of people in the UK now choose to contactless over  other more traditional payment methods.

Contactless limits vary hugely around the world and with studies linking higher limits to more frequent spending, mapping the contactless card caps of the world can give  us unique insight into the global economy.

Expert Market’s new map combines data from national banks, card providers and financial news outlets to reveal the countries with the most stringent and most generous card caps in the world. 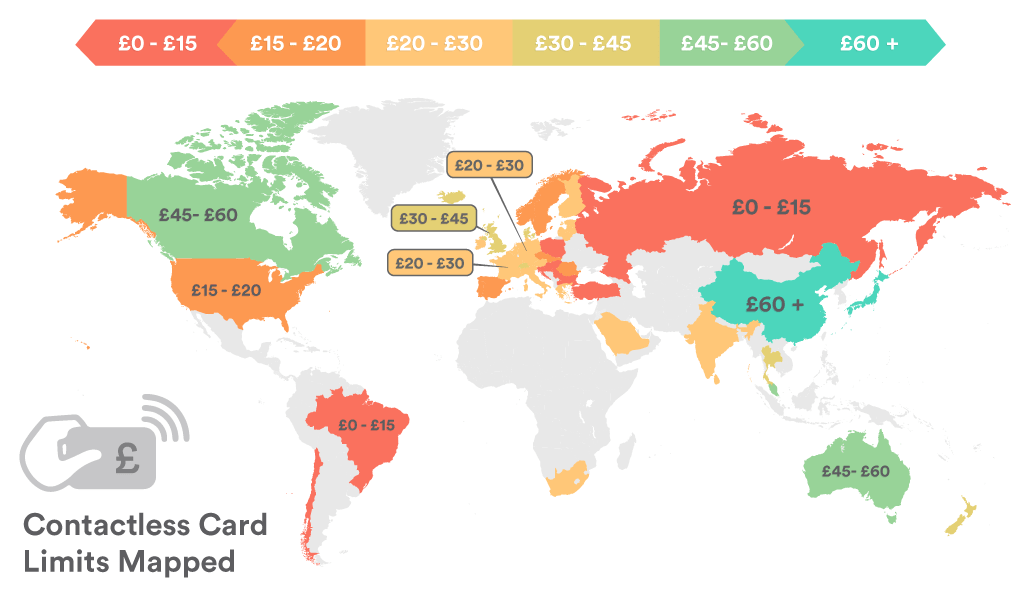 Britain Out of Top Ten in Global Tap Battle

The UK lags behind Asian countries in the contactless limit ranking, coming 13th, behind the likes of Japan, China, Canada and Australia. With a cap of just £30, Brits have around half the spending allowance of Canadians and Singaporeans and a whole £10 less than consumers in Denmark and New Zealand.

Analysis by Visa shows that increasing contactless limits can have a transformative effect on consumer spending habits. For example, when the UK limit was increased from £20 to £30 in 2016, the cashless economy experienced significant growth, particularly within the supermarket, restaurant and service station sector. Being behind this trend could not only inconvenience increasingly tap-happy shoppers, but also have a knock-on effect on the economy.

Asia Ahead of Contactless Curve

China and Japan, the world’s second and third largest economies, have the most liberal limits in the study – over £100 each. In fact, no less than six of the top ten countries are Asian, cementing the region ’s position as a front runner in the contactless payment revolution.

The relatively recent economic boom of these nations also suggests that early adopters of innovative new payment technologies, with generous limits, empower consumers and can boost the economy.

Despite being the world’s largest economy, contactless cards are yet to take off in the US, with the nation coming 20th out of 49. The vast majority of Americans don’t use contactless cards at all and this is reflected in their meagre ‘wave and pay’ allowance of around £19.

The reluctance of US banks to invest in the infrastructure needed for ‘tap and go’ could mean that the country loses out on offering customers a  quicker and easier purchasing experience and hinders both card payment and economic growth in certain sectors.

You can see the full list of countries below: