Bank of America sets record for patents granted during H1 2021

Bank of America has recorded the most patents granted in H1 of any year in the company’s history.

The bank also applied for 403 patents, despite 85% of its workforce continuing to work from home during the pandemic. Bank of America ranks 108th on the IPO Top 300 list of US granted patents, its highest ranking ever. 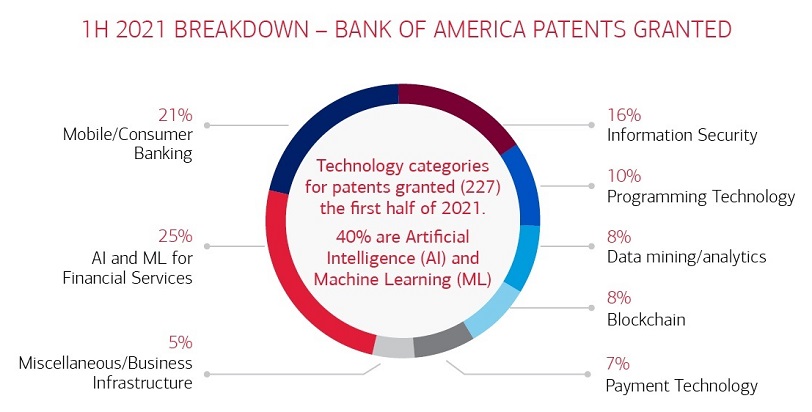 The number of patent applications filed in the U.S. Patent and Trademark Office from 2000 to 2020 only experienced two prominent drops—one in 2009 during a downturn in the US economy and one in 2020 when the coronavirus pandemic reached the US1

“We’re in a period of unprecedented change, and as any great company knows, delivering for customers and clients requires a strong focus on innovation,” comments Cathy Bessant, Bank of America’s Chief Operations and Technology Officer.

“The culture we’ve created at Bank of America is immensely creative and forward looking, driving solutions that make our clients’ financial lives better.”

The bank’s patent portfolio consists of 4,943 patents granted or applied for, resulting from the work of nearly 6,000 inventors based in 42 US states and 13 countries around the world.

One of the company’s inventors is Manu Kurian, a senior vice president within global banking. Manu ranks in the top 300 patent holders in the world, filing more than 360 patents since 2014, with more than 220 of those having been granted.

“My primary responsibilities are on mobile data,” Kurian said. “The bank really values the way we handle our data. And so part of that is also being able to move that data efficiently between our different systems so that we have that opportunity to serve our clients.”