Defying predictions, remittance flows have proved to be resilient during the COVID-19 crisis according the World Bank. In 2020, officially recorded remittance flows to low-and middle-income countries reached $540 billion, only 1.6% below the $548 billion seen in 2019.

Remittances have therefore become an important consumption smoothing mechanism for the recipient households and, as such, they form an increasingly important (private) element of global social protection systems.

Among regions, remittances to Latin America and Caribbean grew by 6.5% in 2020 and were supported by a recovering economy and moderately improving labour market in the United States.

In South Asia, there was a slight moderation in the growth of remittance flows in 2020, to 5.2%, while flows to the Middle East and North Africa grew by a modest 2.3%.

Flows to Europe and Central Asia are estimated to have fallen by 9.7%, to East Asia and the Pacific by 7.9%, and to Sub-Saharan Africa by 12.5%.

In 2020, in current US dollar terms, the top five remittance recipient countries were India, China, Mexico, the Philippines, and Egypt.

India has been the largest recipient of remittances since 2008.

As a share of gross domestic product, the top five recipients in 2020 were, by contrast, smaller economies: Tonga, Lebanon, Kyrgyz Republic, Tajikistan, and El Salvador.

The United States was the largest source country for remittances in 2020, followed by the United Arab Emirates, Saudi Arabia, and the Russian Federation. 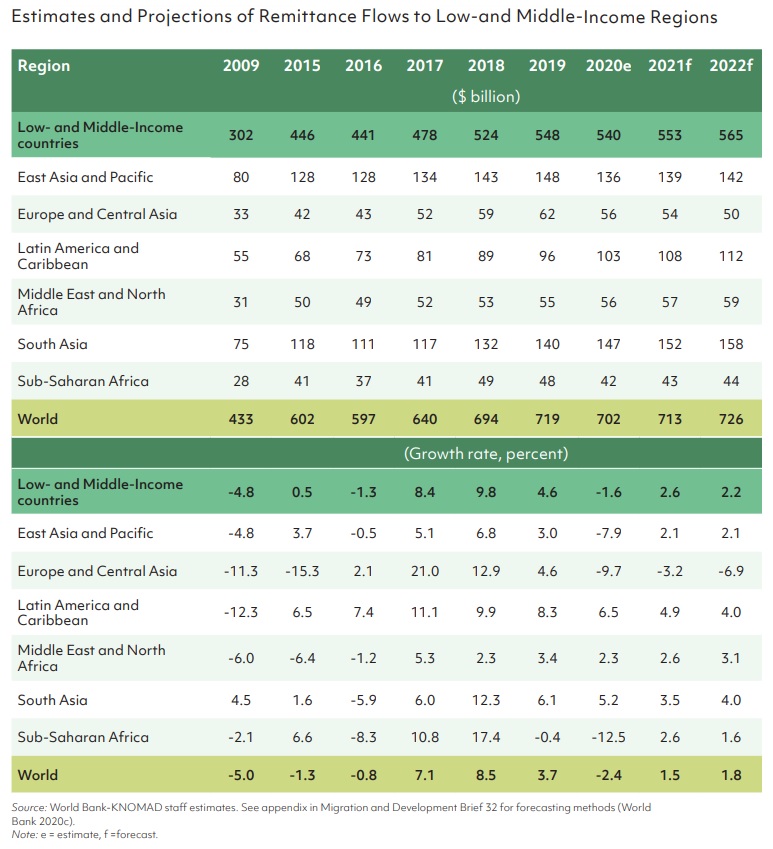 Foremost among the drivers of remittance flows and reasons behind their resilience during the crisis was migrants’ desire to help their families, to send money home by cutting consumption or drawing on savings.

Other drivers included fiscal stimulus in host countries that resulted in better-than-expected economic performance, a shift in flows from informal to formal channels, and cyclical movements in oil prices and currency exchange rates.

Counter-cyclical fiscal policy, especially cash transfer and employment support programs implemented in many large economies, cushioned a fall in personal incomes and consumption, and supported businesses in the continuing employment of workers.

Such programs also benefited foreign-born persons. The economic performance of major migrant host countries, especially those in North America and Europe, proved to be better in 2020 than the growth rates projected in March and April.

It is believed that an increase in the recorded flows was in part due to a broad shift in flows from informal to formal channels in 2020.

There was a greater use of digital remittance channels as hand carry was affected by travel bans and lockdowns.

The true size of remittances, which includes formal and informal flows, is believed to be larger than officially reported data, though the extent of the impact of COVID-19 on informal flows is unclear.

In general, due to the weak oil price, remittances from oil-dependent economies declined more than they did in non-oil economies.

In the case of Russia, the twin effects of weak oil price and depreciation of the source-country currency caused a nearly 10% fall in remittance flows to the Europe and Central Asia region.

Remittance flows to Bangladesh and Pakistan were also affected by idiosyncratic factors – such as the cancellation of the pilgrimage to Mecca (hajj), floods in Bangladesh in July 2020, and tax incentives offered to attract remittances.

In the case of Mexico, a sharp depreciation of the peso against the US dollar since March 2020 attracted remittances as goods, services, and assets in Mexico became cheaper to purchase with the US dollar.

Remittances are expected to grow twice as fast in Latin America and the Caribbean and in South Asia, but they are expected to decline further in Europe and Central Asia, and remain sluggish in Sub-Saharan Africa.

The recurrence of COVID-19 outbreaks cannot be ruled out in the medium-term case, many countries may not be able to provide the same level of fiscal stimulus they did in 2020.

Finally, the shifts from cash to digital and informal to formal channels may also slow down, unless solutions are found for improving access to banking for migrants and for new money transfer operators.

Supporting remittance infrastructure to keep remittances flowing should include efforts to lower remittance fees, which have continued to average above 6.5% in Q4 2020, more than double the SDG target of 3% by 2030.

The average remittance cost was lowest in South Asia, at 4.9%, while Sub-Saharan Africa continued to have the highest average cost, at 8.2%.

Many migrants do not have the ID documents required to open bank accounts, which prevents them from using online remittance services.

Some countries issued regulations for allowing e-onboarding to comply with know-your-customer laws.

Regulators are aware of the usefulness of applying a risk-based approach rather than a rule-based approach to small-value remittances, but this has not yet been adopted.