An impressive €42.7 billion was spent on European virtual commercial cards in 2019, accounting for 12% of total commercial card spending, according to RBR. Virtual card expenditure in the region increased at an average of 32% per year between 2016 and 2019.

Virtual commercial cards are digital card numbers generated centrally or instantly issued, which are distinct from tokenised versions of plastic cards in mobile wallets. They are offered primarily by specialists, but increasingly also by traditional bank issuers.

Cards are widely used for booking flights and procurement 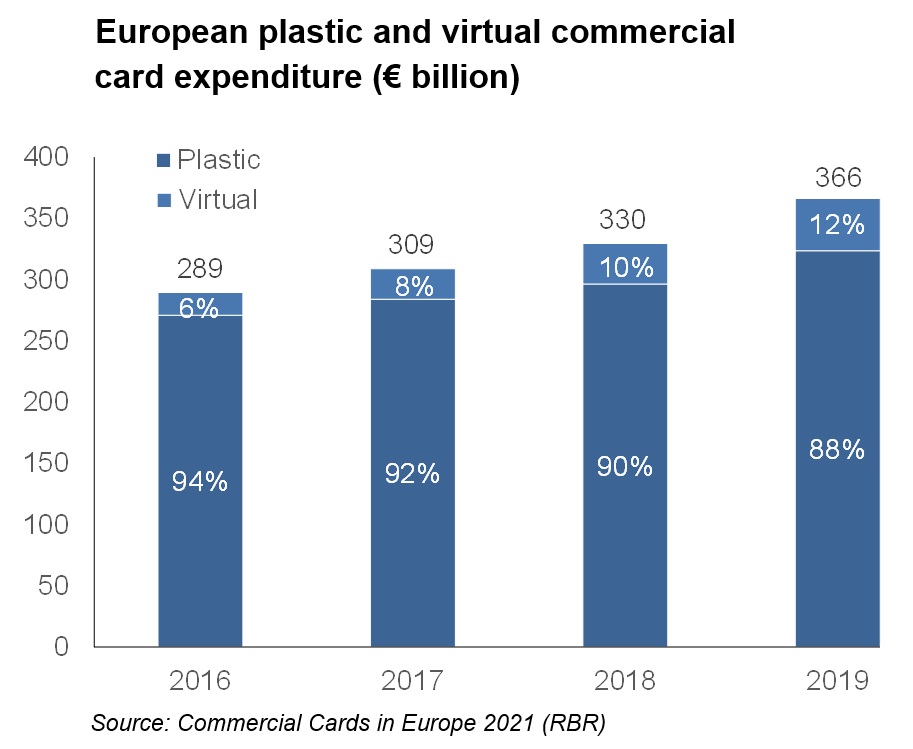 The study reveals that cards associated with travel represented 83% of European virtual commercial card spending in 2019.

These include Lodge cards, which are held at travel management companies to pay for their client companies’ flights and other travel expenses.

Virtual Purchasing cards, which are used to facilitate procurement, are also gaining traction. They are used, for example, for office supplies in Poland, managing subscriptions, such as for software packages, in Spain, and social media advertising in Norway.

Purchasing cards accounted for 17% of virtual card expenditure in the region in 2019.

Cards are especially advantageous for temporary and remote staff

Security and control are two major advantages of virtuals. An obvious security benefit is that, unlike physical cards, virtuals cannot be lost. In addition, virtual numbers are often generated to settle a specific invoice and expire after use, thereby preventing fraudulent usage.

For multi-use virtuals, company administrators may define the maximum spending amount and the merchant sectors where usage is permitted.

Virtual cards also allow for enhanced efficiency given that they can be issued quickly and easily where it is costly or impractical to issue a plastic card.

The growing number of temporary workers and, especially since the outbreak of the COVID-19 pandemic, home-based employees, has made virtuals a more compelling option for many firms.

The travel restrictions imposed as a result of COVID-19 represent a short-term inhibitor of virtuals given that many are used for travel-related expenses. As the travel sector recovers, high double-digit growth in virtual spending is expected to resume.

“Virtual cards will play a major role in shaping the future of the commercial cards sector as the pandemic has accelerated the shift to online payments. Going forward, the expansion of NFC acceptance will also open up more opportunities in face-to-face payments, with virtual-only cards embedded in mobile wallets increasingly substituting plastic cards,” comments Chris Herbert, who led the research for RBR.