The reality of cyber crime in Europe

Are you aware of just how often real-world offences and cyber crimes are committed across Europe and which countries are most affected?

TechRobot has carried out research on real-world crime and cyber crime rates of the 36 OECD countries, as well as sharing how well informed citizens are about crime.

They have also revealed whether Europeans feel concerned about experiencing certain crimes and how regularly each European country changed their email password in the last 12 months, in response to cyber crime.

Europe is considered one of the safest continents in the world and is the only continent to have not seen a decline in safety since 2009, according to the Institute for Economics and Peace.

In addition, technical innovation has been a fundamental source for good, allowing convenience, access to information and increased communication. However, this has led to a deeping of cyber crime in society.

The Internet Organised Crime Threat Assessment (IOCTA) has stated that cyber crime is becoming more aggressive and confrontational. Phishing, pharming and fraudulent credit/debit card misuse are just some of the types of cyber crimes users need to be aware of.

The analysis reveals that the most dangerous country for cyber crime is the United Kingdom. According to a study carried out by Detica for the Cabinet Office, the UK suffers losses of £27 billion per annum due to Cyber Crime, with the predominant victims being UK businesses.

13.64 for every 100,000 citizens in the UK experience financial losses due to cyber crime, which is the highest rate in Europe.

In addition, with the UK having the highest rate of online ID theft (20.5 in every 100,000 people) and credit/debit card fraud (47.7 for every 100,000 citizens), it’s not surprising that people living in the UK have changed their email password the most out of all the countries researched in the last 12 months. 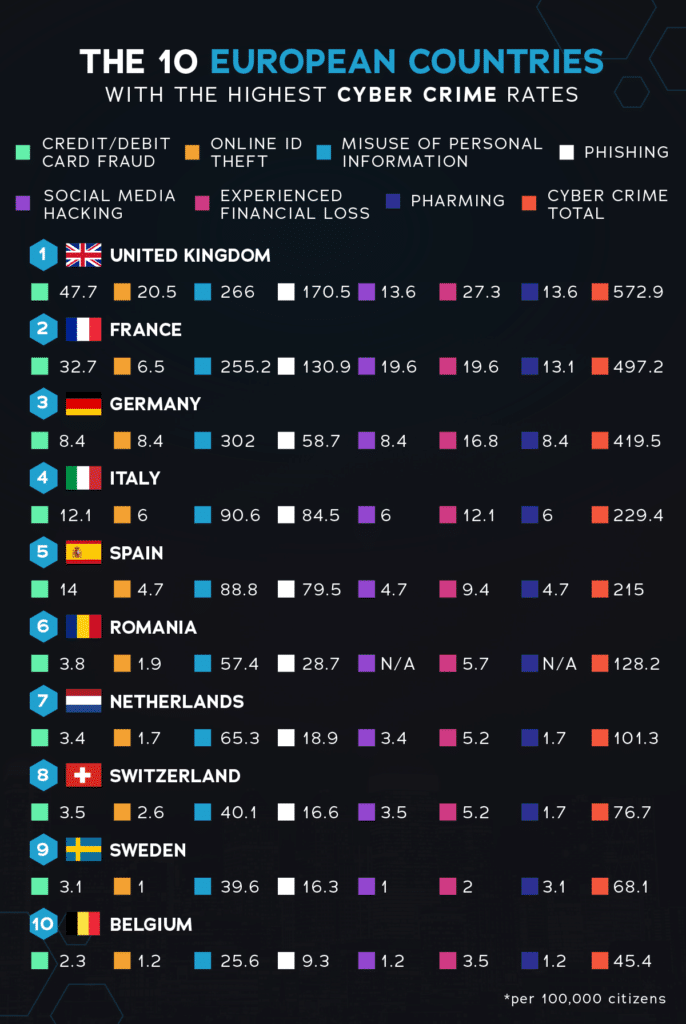 Just behind the UK is France, which has the second-highest rate of cyber crime in Europe at 497.2 per 100,000 citizens.

French people experience social media account hacking at a rate of 19.63 in every 100,000 people, which is also the second-highest amongst the countries researched.

Lots of people tend to use very simple, easy-to-guess passwords and reuse these for many different accounts. This allows hackers to easily get into more than one account.

This may also suggest why French people believe the risk of becoming a victim of cyber crime is increasing; the rate of this concern is at 529.95 per 100,000.

The country with the largest population, Germany, comes third for being most at risk from cyber crime.

German people experience the misuse of personal information online more than any other country in Europe, in particular phishing.

With the highest rate of this crime at 302 per 100,000 citizens, it is not surprising that 662.81 per 100,00 German people believe that the risk of becoming a victim of cyber crime is increasing.

Despite this, many Germans are not at all informed about the risks of cyber crime, with 100.68 for every 100,000 citizens lacking knowledge about the dangers.

Germany also has the fifth-highest rate of experiencing pharming, as this scam happens to 58.73 Germans for every 100,000.

Pharming is another online scam similar to phishing in which a website’s traffic is manipulated by a hacker, and confidential information can be stolen. Essentially, it is a cyber criminal creating a fake website and then redirecting users to it.

North Macedonia ranks as the safest country in the study, with an extremely low rate of 39.89 real-world crime offences and a rate of 5 cyber crime offences per 100,000 citizens.

Although the country isn’t the safest for every crime in Europe, for instance, the intentional homicide rates are 1.49 per 100,000 people which is the 8th worst in Europe, it consistently ranks low in all categories of real-world crime.

Even though the country is only the thirteenth safest country relating to cyber crime, compared to the UK’s rate of 572.94 offences in every 100,000 people which makes it the most dangerous, it is relatively safe.

The rates of real-world crime are higher than cyber for every country researched, making it more of a threat for inhabitants in these countries.

Burglary, a crime that significantly affects all the countries, is experienced at a rate of over 50 per every 100,000 citizens for every country except Albania, which only has a rate of 5.23.

This could explain why European countries fear having their mobile phone, wallet or purse stolen over a cyber crime being perpetrated against them.

Furthermore, with the threat of cyber increasing, so is the fear of experiencing an attacker impersonating you online.

From January to June 2020,  £58 million was lost to impersonation scams in the UK alone, according to UK Finance. Cyber criminals can pretend to be the police, banks, or government organisations in order to get their victims to reveal sensitive information.

Although real-world crime does affect Europeans at a higher rate than cyber crime, most European citizens feel that the risks of cyber crime are increasing.

The post The reality of cyber crime in Europe appeared first on Payments Cards & Mobile.