Taking stock of new tech: where is the FinTech industry now?

In Q4 of 2021, FinTech Connect surveyed 100+ FinTech Leads from across the entire FinTech ecosystem to find out more about what are the challenges and opportunities currently presented within the financial technology ecosystem.

It is clear that 2021 has provided an unexpected crossroads. Incumbent financial institutions have had to put their digital transformations in warp drive.

New technologies that were previously only being looked at, are now in the process of being adopted and rapidly deployed.

FinTech is avoiding the trough of disillusionment and at a place of real excitement; and the survey seeks to address where we go next.

Payments Cards & Mobile has edited an excerpt from the text around future technology trends, the full report 2021: The year of FinTech Adaption is worth a read. 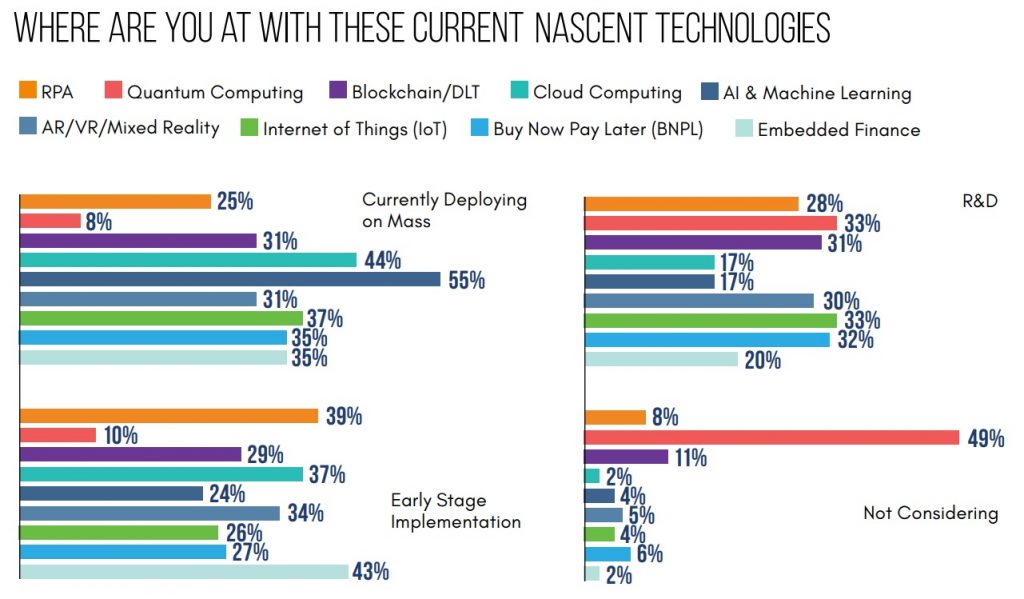 Last year, cloud was by far the frontrunner when it came to deployment, with 54% reporting they were deploying on mass, but this year AI & Machine Learning has leapfrogged into pole position with 55% to Cloud’s 2021 figure of 41%.

This undoubtedly reflects the maturing of the technologies grouped under AI & machine learning and the widespread belief in their ability to deliver real value. While Cloud deployment will continue to be a pressing concern for many FS players, it would appear that greater energies are being funnelled into becoming more ‘intelligent organisations’.

Things are certainly looking up for RPA and blockchain enthusiasts. Last year, 43% of our respondents said they were not considering RPA; this hear that figure has shrunk to 8%, with 25% saying they are deploying on mass and 39% reporting being at the early stages of implementation.

Deployment of blockchain has seen a similar boost: last year, 43% said they were not considering it – this year’s figure is 11%. Even more striking: last year, 7% said they were deploying on mass – this year 31% say they are. Clearly, the use cases for both technology sets have been found to be compelling enough to move from the ‘not considering’ stage to putting it into production.

Tech Deployment: What’s on The Drawing Board?

It is surely a positive sign that so many of our participants report engaging in R&D around so many nascent technologies. The road from proof of concept to implementation can be a long one, but the scale of research being conducted across the ecosystem, as evidenced by this research, bodes well for fintech’s future.

Almost a third of respondents (31%) are doing R&D on blockchain, reaffirming the point made above, while a similar proportion are exploring quantum computing (33%), though we have less to see in terms of tangible benefits with this particular set of technologies just yet.

AR/ VR/Mixed reality is being researched by 3 in 10 participant organisations, while IoT and Buy no, pay later are attracting similar levels of interest, with 33% and 32% respectively. Given the flurry of activity in the R&D space, fintech watchers will surely be keenly watching for the first signs of implementation.

Tech Deployment: What’s Off the Radar?

Although it performs well in terms of R&D activity, quantum computing cannot yet be said to be ‘on the radar’ as far as live implementations go. While FS players of all kinds are likely to benefit from use cases such as portfolio risk optimization, forecasting and fraud detection, the expense and technical expertise required to develop and operate a quantum computer alone exclude many.

While the future may indeed be quantum, as we often here, that transition seems a world away yet for the majority of FinTech players.

The post Taking stock of new tech: where is the FinTech industry now? appeared first on Payments Cards & Mobile.