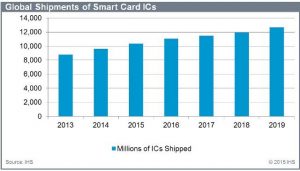 The key end-user sectors that will drive growth over the next five years include payment and banking, e-government and healthcare, subscriber identity modules (SIM) and transportation. In 2014 these four sectors accounted for approximately 89% of IC unit shipments. In 2019 unit shipments are expected to fall slightly to 87% of IC volume shipments.

The SIM card IC market is projected to increase from 5.2 billion units in 2014 to 6.0 billion in 2019, whilst the payment and banking sector is projected to remain the second largest sector for smart card IC unit shipments, from 2014 to 2019. The research also found that in 2014 and 2015, EMV cards have grown significantly in the US. More than 220 million smart payment and banking cards were shipped to the US last year, and volumes are expected increase to around 500 million smart payment cards in 2015.