Cards and card payment at the point of sale and online showed solid growth rates in most European countries in 2017. This was supported by the rollout of contactless technologies, digital wallets and mobile NFC HCE payments. We examine the statistics and notable trends from the latest Payment Card Yearbooks.

Cards in issue and card payments by volume and value showed significant rates of growth once again across the 33 countries covered in the European Card Payment Yearbook 2017-18. POS payments showed further strong growth, while cash withdrawals grew slightly. By the end of 2016, card payments by volume (number) accounted for 52.22% of the cashless payments in the region, up from 50.24% in the previous year.

CARDS AND CARD USE IN EUROPE 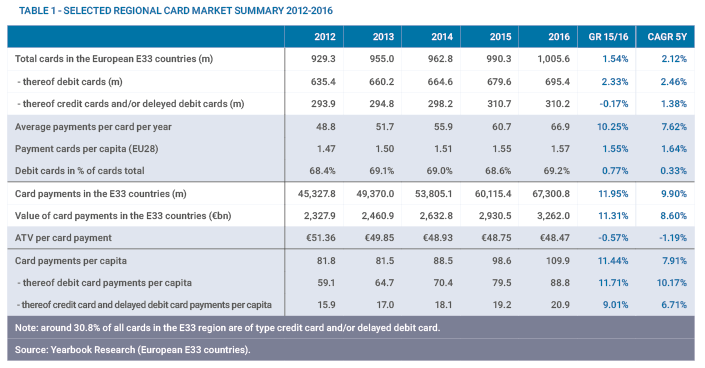 In 2016, the region’s total debit card base grew by 15.8 million cards to 695.4 million, an increase of 2.3%, and CAGR of 2.5%. There are around 1.14 debit cards per capita on average across Europe. Only seven countries recorded a decline in the total number of debit cards due to consolidation of the card portfolios following the rollout of contactless cards and bank mergers. The greatest declines were seen in Latvia (-7.6%) and the Netherlands (-1.6%). Serbia, Austria, Greece, Italy, Romania and Portugal showed higher debit growth than usual.

There were 54.4 billion payments on debit cards in 2015, a 12.2% increase on 2015. All the major developed markets continued to show significant growth in the number of debit payments in 2016. The leaders, UK and France, accounted for 24.3 billion debit card payments in 2016, an impressive 44.3% of the regional total. With specific regard to Germany, 1.69 billion card-initiated IBAN-based ELV direct debits totalling €93.9 billion are not included in the debit card total.

In 2016, the total credit/delayed debit card base declined by 0.5 million cards to 310.2 million, down slightly by 0.2% from 2015. There were 0.51 credit cards per capita on average across the E33 countries, although credit cards countries, such as Greece, Ireland, Turkey and the UK accounted for 127.6 million credit/delayed debit cards, 41.1% of the total.

In 2016, the POS terminal base grew across the E33 countries by 11.2% to 15.02 million (CAGR: 5.3%). The rollout of contactless POS terminals and mPOS terminals for small merchants has contributed to the stronger growth from 2015.

The total number of POS payments was 60.9 billion, up from 55.7 billion in 2015. There was an overall growth rate of 9.3% compared to 2015, again higher than the CAGR of 8.3% seen in the last five years. There were 99.5 POS payments per capita per year on average, with a statistical POS ATV of €44.69 across the E33 countries. Naturally the POS ATV varies according to country and reflects national payment habits. At one end of the scale was Latvia with an ATV per POS payment of €15.2 and at the other was Italy with €72.5.

The number of POS payments per capita once again showed a range from 10.9 POS payments in Bulgaria up to extremely high 426.9 POS payments in Iceland. The Nordic countries top the table of payments at POS: Iceland, Norway, Sweden, Denmark, Finland. They are followed by the UK, Estonia, the Netherlands, France and Belgium.

The number of ATMs continued to decline slightly across the E33 countries covered in the Yearbook, advancing to 460,593 ATMs. Again, the decline of 0.4% from 2015 compares with an a low CAGR of 0.6% over the last five years. The number of cash withdrawals per ATM per month amounted to an average 2,519.7 withdrawals.

In Europe, there is a mid-term trend of declining ATM installations, due to bank mergers and the higher use of cards at point of sale and for remote payments. In 2015, ATM density per 1 million capita showed a wide range from 265.2 in mature Finland to a high 1,355.1 in Portugal.

CARDS AND REMOTE PAYMENTS ON THE INTERNET

Remote e-/m-payments on the internet are indispensable parts of online sales in the European economy. Thanks to digital technologies (tablets, smartphones, mobile apps, QR-codes, 1D-barcodes, Bluetooth BLE, HCE NFC with tokenisation security), both B2C e-/m-commerce and retail outlets with POS terminals converge into an omnichannel ecosystem, including in-app payments and mobile in-store payments.

In 2016, e-/m-payments in the EU28 countries showed continued growth rates higher than 10%; and 434 million individuals in the EU28 region (83 percent) have internet access.

The latest edition of the European Payment Cards Yearbook 2017-18 is based on end-2016 payment industry figures. It reports the recent card market developments and the latest card business trends. Rich statistical data is provided by country, including typical key performance indicators to document the growth of cards in issue and the growth of transactions by number and by value.

Further information on leading issuers, acquirers, processors and PSPs, on cards and card-less payments, on ATM/POS payments and online payments, digital wallets and mobile payments initiatives by country are also included, along with notable trends.

Note: This article is compiled using detailed information adapted from individual country profiles and from the European Overview section of the European Payment Card Yearbook 2017-18.

The post Payment cards in Europe – an update from the European Payment Card Yearbooks appeared first on Payments Cards & Mobile.