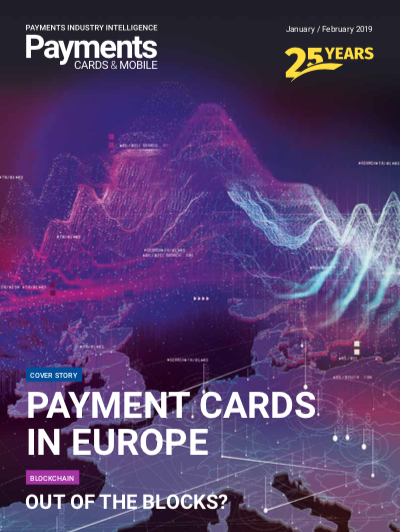 Driven by contactless card payments and by increased card usage, in 2017 the number of card payments continued to grow across the 33 countries covered by our PCM’s Payment Card Yearbooks.

Horst Foerster, Head of Research at Payments Cards and Mobile, examines the statistics and significant trends.

Cards and Card Use in Europe

By the end of 2017, card payments by number accounted for 55.3 percent of cashless payments in Europe, up from 52.2 percent the previous year.

Higher card use led to a growing number of POS and online payments and more low-value contactless payments. In 2017, card payments by number and by value once again grew more rapidly than the compound annual growth rate (CAGR) between 2012 and 2017. 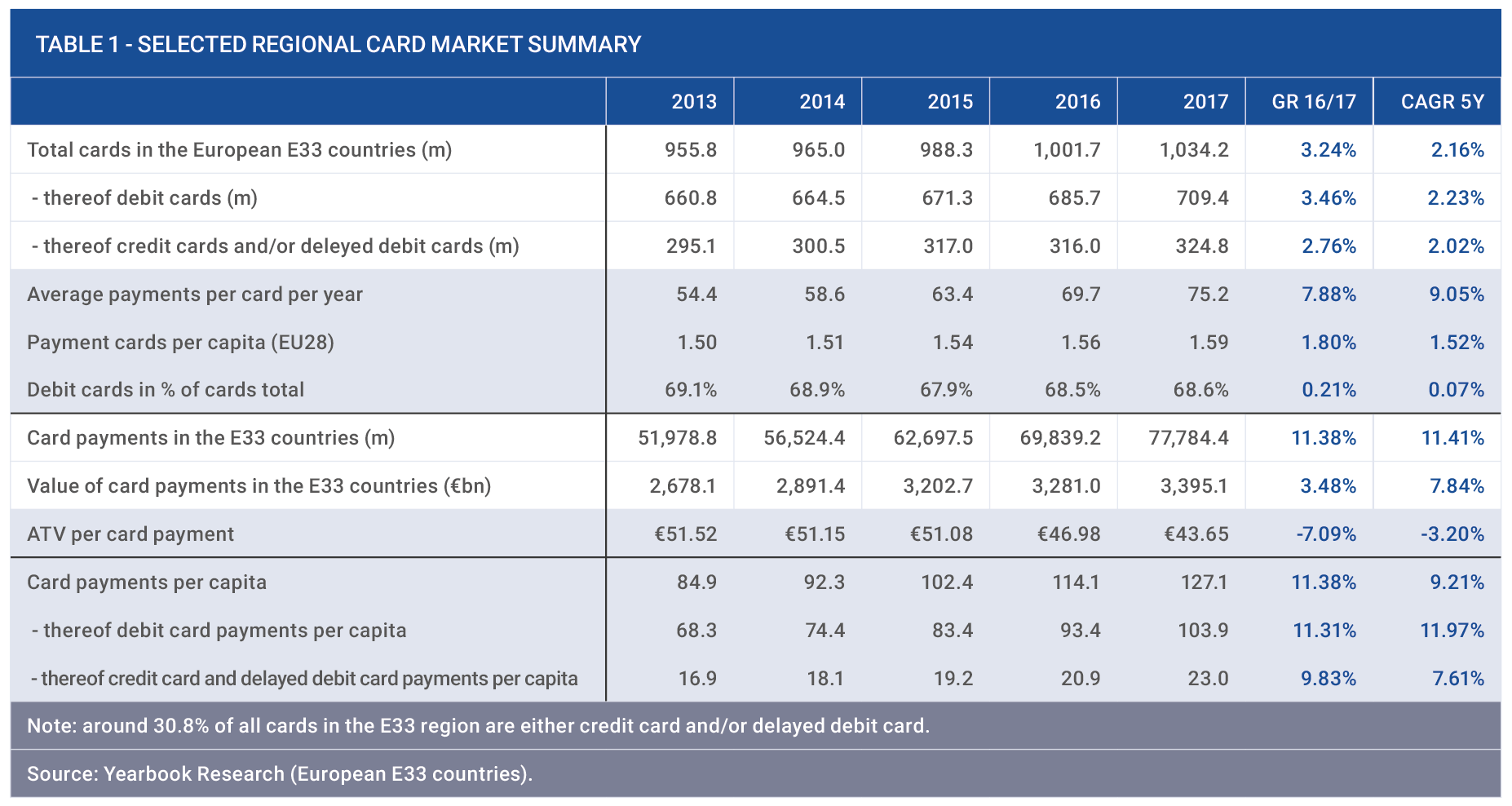 In 2017, the E33 region’s total debit card base grew by 23.7 million cards to 709.4 million, an increase of 3.5 percent, and CAGR of 2.2 percent. On average, there were around 1.15 debit cards per capita across Europe. Only six countries recorded a decline in the total number of debit cards due to consolidation of card portfolios following the rollout of contactless cards. The greatest declines were seen in Iceland (-9.4 percent) and Sweden (-5.7 percent). Latvia, Cyprus, Turkey, Greece and Poland showed higher debit card growth than usual.

There were 63.6 billion payments on debit cards in 2017, a 11.3 percent increase on 2016, with a total value of €2.58 trillion. All the major developed markets continued to show significant growth in the number of debit payments in 2017. The leaders, the UK and France, accounted for 29.2 billion debit card payments in 2017, an impressive 45.8 percent of the regional total. With specific regard to Germany, 1.5 billion card-initiated IBAN-based ELV direct debits totalling €76.5 billion are not included in the debit card total.

In 2017, the POS terminal base across the E33 countries grew by 7.3 percent to 15.8 million (CAGR: 6.1 percent). The roll-out of contactless POS terminals and mPOS terminals for small merchants has contributed to stronger growth since 2015.

The total number of POS payments was 69.9 billion, up from 55.7 billion in 2015. There was an overall growth rate of 14.6 percent compared to 2015, which was again higher than the CAGR of 9.5 percent seen over the last five years. On average, there were 113.7 POS payments per capita each year, with a statistical POS ATV of €42.17 across the E33 countries. Naturally, the POS ATV varies by country and reflects national payment habits. At one end of the scale, Latvia had an ATV per POS payment of €15.6, while at the other end, Italy boasted an ATV of €67.8 for each POS payment.

POS payments per capita once again showed a range from 15.7 POS payments in Bulgaria up to an extremely high 443.1 POS payments for each person in Iceland. The Nordic countries topped the POS payments table: Iceland, Norway, Sweden, Denmark and Finland occupied the top five spots. They were followed by the UK, Estonia, the Netherlands, France and Belgium.

The number of ATMs continued to decline slightly, with 459,645 ATMs across the E33 countries covered in the Yearbook. This decline of -0.3 percent from 2016 compares with a low CAGR of +0.4 percent in ATM numbers over the last five years. The number of cash withdrawals per ATM each month amounted to an average of 2,494 withdrawals.

In Europe, there is a medium-term trend of declining ATM installations owing to bank mergers, branch closures and the higher use of cards. In 2017, ATM density per million inhabitants showed a wide range, from 247 in mature Sweden to a high of 1,315 in Portugal.

Cards and Remote Payments on the Internet

In 2017, around 87 percent of households in the 28 EU member states had internet access, 85 percent of individuals in the EU28 countries used the internet and 51 percent were online banking users.

In 2017, online payments and mobile payments in the E33 countries showed continued growth rates higher than 10 percent and 20 percent respectively. With eGDP representing a 7.9 percent share of total GDP, the UK is the largest e-commerce market in Europe and the third largest worldwide, behind China and the US.

In addition, online merchants accept traditional payment services such as payment on invoice, payment in advance, card/cash on delivery, instalment payments and payment on delivery in outlets (click&collect).

Online payments and mobile payments are indispensable parts of digital commerce in the E33 countries. Online buyers purchase using PCs, notebooks, tablets and smartphones, and initiate more and more remote payments from their internet-capable mobile devices. In 2017, for example 83 percent of mobile phone users in the UK accessed the internet via mobile devices, and 41 percent made online purchases using tablets or smartphones.

The latest edition of the European Payment Cards Yearbook 2018-19 is based on end-2017 payment industry figures. It reports recent card market developments and the latest card business trends. Rich statistical data is provided for each country, including typical key performance indicators to document the growth of cards in issue and the growth of transactions by number and by value.

Further information on leading issuers, acquirers, processors and PSPs, on cards and card-less payments, on ATM/POS payments and online payments, digital wallets and mobile payments initiatives by country are also included, along with notable trends.

Note: This article has been compiled using detail information adapted from individual country profiles and from the European Overview section of the European Payment Card Yearbook 2018-19.