Increasing financial inclusion efforts, the rapid uptake of contactless and mobile payments, and the introduction of new payment systems are contributing to growth in cashless payments worldwide. 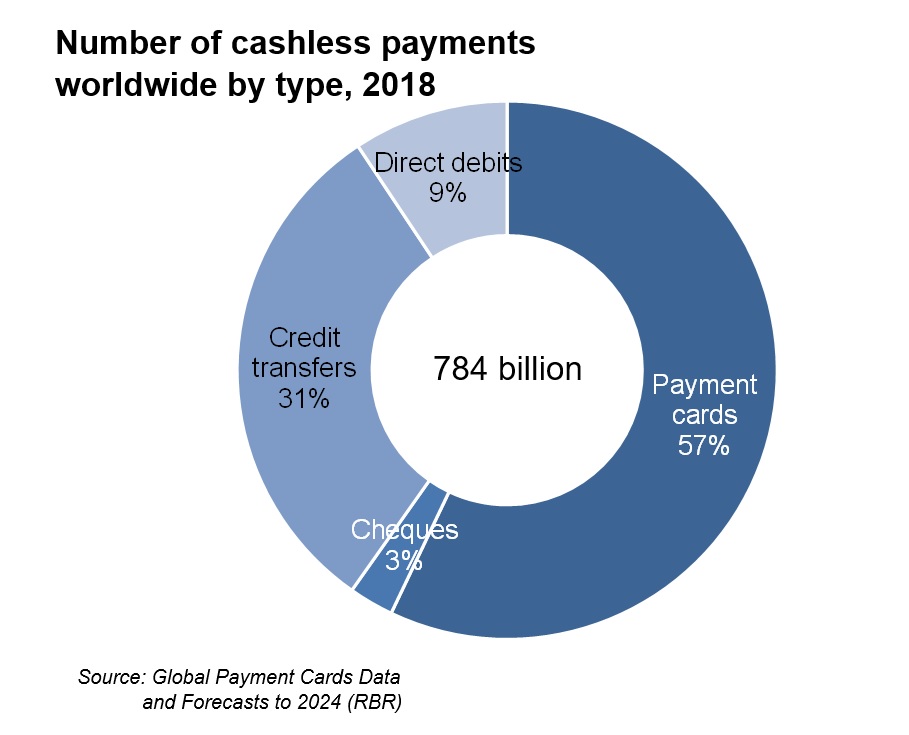 A new study reveals that in 2018 the number of cashless payments grew by 18% to reach 784 billion. Payment cards and credit transfers were the greatest contributors to this growth, with direct debit payments increasing by just 6%.

Cheques continue to fall out of favour, and declined by 7%, dwindling in most markets as consumers and businesses alike move to digital. Even in the US, where cheque usage is much higher than in other markets, cheques are ceding their share to alternative methods. The number of cashless payments is growing much faster than expenditure, indicating a shift from cash to cashless for ever‑lower amounts, while the number of cash withdrawals at ATMs fell for the first time in many years, by 3%.

According to the report, cards account for 57% of cashless payments. The uptick in payment card spending can be attributed to more people entering the banking system as a result of financial inclusion efforts – such as in India and Indonesia. Additionally, increased issuance of contactless cards, for example in China, where all newly-issued cards must be contactless, is driving card usage, boosted by rising numbers of EFTPOS terminals which accept such cards.

The study shows that $1.2 quadrillion was spent via cashless payment methods in 2018, up 6% on the year before. While cards saw the highest growth in expenditure, they account for just 2% of cashless spending, being typically used for everyday, low-value payments. Mobile payments, popular particularly in areas with high smartphone penetration, are contributing to growing card usage for lower value transactions, for example on public transport.

Credit transfers, meanwhile, retain the lion’s share of cashless expenditure, at 85%. Typically used by large businesses to make high-value salary payments and B2B transactions, these are also increasingly utilised for lower value peer-to-peer payments, for example in markets such as China and Russia.

Valued for their speed and convenience, credit transfers account for the vast majority of cashless expenditure across almost all regions, although Asia-Pacific represents over 70% of the global total. The USA is a notable exception, as there, direct debits are often preferred for payroll and debt repayments and therefore account for the highest share of cashless spend.

New alternative payment methods abound, for example in Russia where the Faster Payments System introduced in 2019 allows consumers and businesses to make instant funds transfers via mobile phone numbers and QR codes. Such initiatives, combined with rising levels of e-commerce which increasingly drive card payments and credit transfers, indicate that cashless payments have yet to peak