As the catastrophic human costs of the coronavirus come into clearer focus, so too do the consequences for people’s well-being beyond the immediate imperative to safeguard lives. Taking care of our families and friends, our neighbours and communities, our employees and coworkers comes first.

The next focus of all the professionals involved with the transactions infrastructure must be the stability of systems, for both payments and securities. At this writing, despite the scale of the emergency measures underway, no major outages of core infrastructure have been reported. Payments systems have proved resilient and reliable, as they have in earlier crises. Payments systems and providers, which enable companies and their customers to transfer funds in return for goods and services, continue to enjoy a high level of trust from the general public – according to a McKinsey note.

At the same time, we all realise that the economic disruption will be profound and the short-term drop in activity for economies under lockdown will be severe. Quarterly GDP in Q22020 could decline by as much as 35 to 40% – and the payments industry’s financial outlook reflects that uncertainty in the short term. But the industry’s stability will play an invaluable role in rebooting the global economy, and the potential for innovation can support functioning economies as a “new normal” emerges. Below, we observe how the payments industry can adapt now – and suggest ten fundamental changes to the payments ecosystem that will help all of us find a new normal.

How will the coronavirus crisis affect payments economics?

There is no definitive answer. Much depends on the complex interplay between economic activity, the interest-rate landscape and associated liquidity patterns, and the evolution of individual and collective behaviour. Taking these factors into account, we expect revenue growth in global payments to turn negative. Instead of growing by 6%, as projected by our 2019 global payments report,1 activity could drop by as much as 8 to 10% of total revenues, or a reduction of $165 billion to $210 billion—comparable to the 10 to 11% revenue reduction in the wake of the global financial crisis in 2008–09 (Exhibit 1). Expecting a decline in revenues, investors have already driven the share prices of payments companies into a steep decline, substantially beyond the actual profit impact expected. 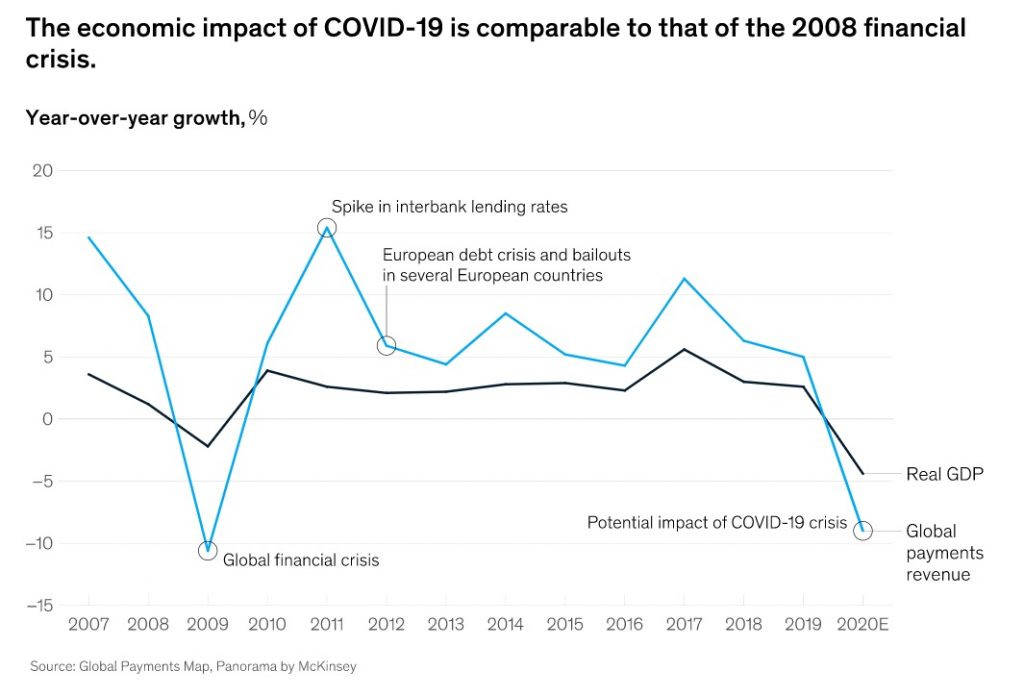 Of course, any projection of industry performance rests on assumptions about overall economic activity. The outlook largely depends on the spread of the virus, the public-health response, and the effectiveness of the fiscal, monetary, and broader public response. A relatively optimistic scenario, taking into account these variables, assumes that the virus will be contained after an economic lockdown of two to three months in Europe and the United States.2

Under this scenario, global GDP would decline in 2020 by 1.5% which we estimate would result in, at most, a decline in payments revenues of around $165 billion, some 8% lower than they were in 2019—instead of the 6% increase against the base of $1.9 trillion we projected before the crisis (Exhibit 2).

A second, more pessimistic, scenario3 contemplates a muted recovery, with resurgence of the virus in China and continued spread in the United States and Europe, leading to a continued drop in global trade levels and a sustained contraction of major economies. Under this scenario, global GDP would contract by 4.7% in 2020, which could lead to a decline in global payments revenues in excess of $210 billion, around 10 to 12% of pre-crisis levels. 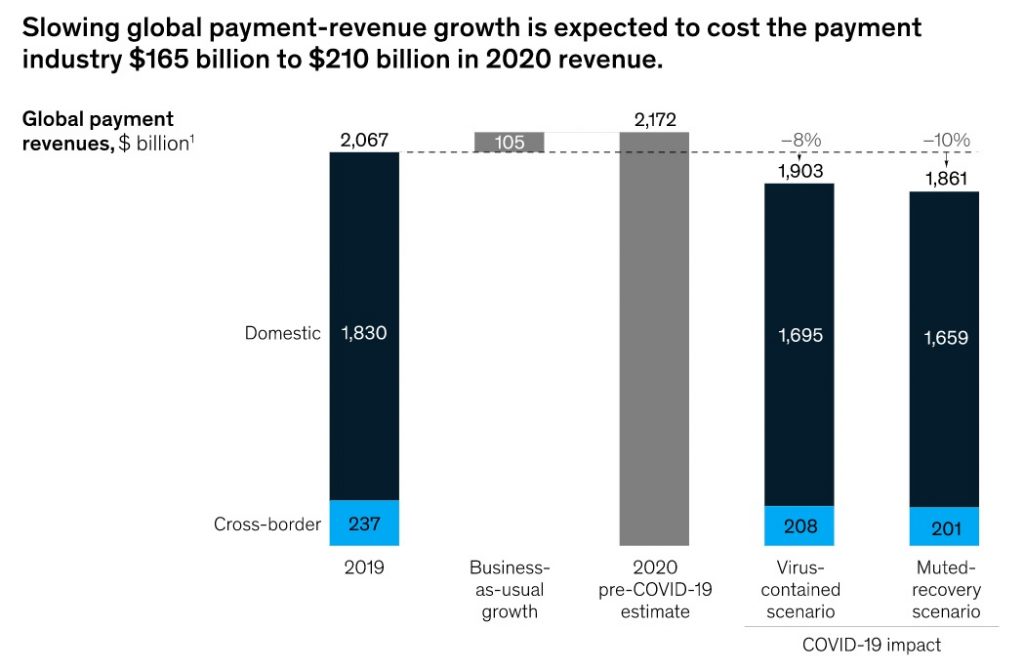 On closer examination, McKinsey’s Global Payments Map simulations suggest that the net interest-margin component, the source of about 60% of overall payments revenues, explains only about 20% of the decline. The transaction component, the source of around 40% of revenues and the driver of the growth of payments revenues over the past few years, would be responsible for about 80% of the decline. The experience of past crises, adjusted for the current mix in geographies and means of payments, suggests that an economic contraction of 1.5% would lead to a disproportionate 8% reduction in payments volumes. The more severe scenario could lead to a drop in transaction volumes of up to 12%.

Although much data are still unavailable, and what we have is still noisy, such projections suggest different underlying realities for different segments of the payments arena (Exhibit 3). 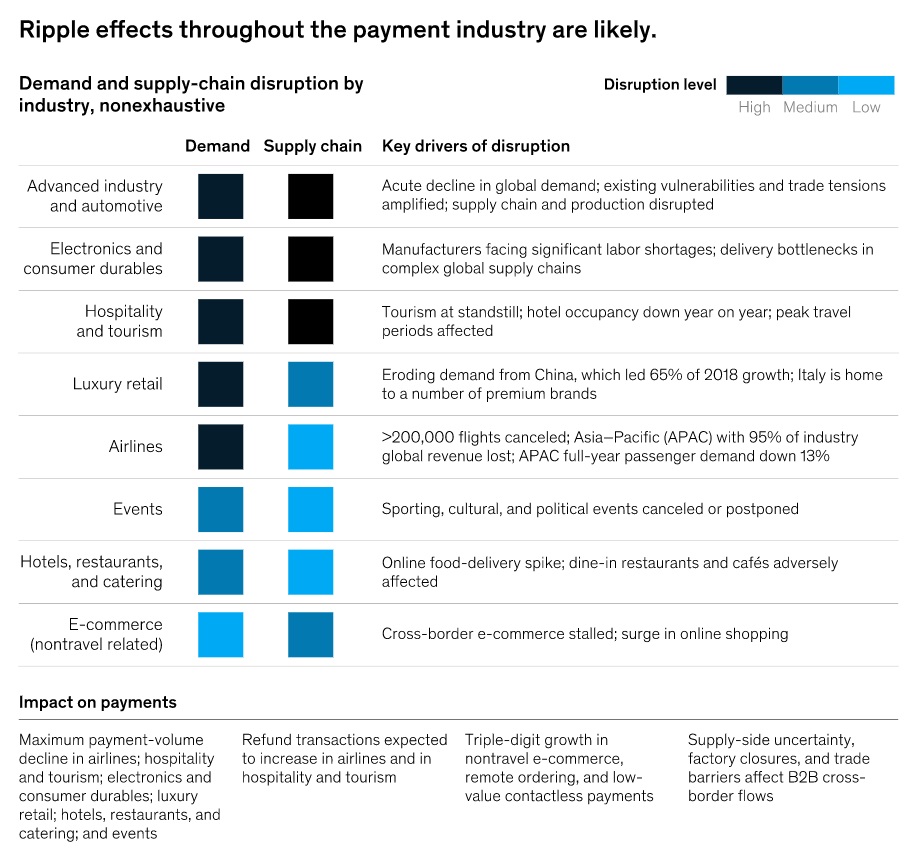 Some payment methods are also likely to suffer more than others. Despite attempts to sterilise cash (using ultraviolet rays, ozone, or heat treatments, for example), the use of cash and other paper payment methods is declining. We understand from most of our discussions that cash withdrawals at ATMs are down dramatically – by more than 50% – in many European countries. Contactless payments, on the other hand, are rising strongly, despite the overall contraction, as the perceived hygienic security is higher than it is for normal POS payments.