Furthermore, the interchange fee caps that came into force in the EU for consumer cards in 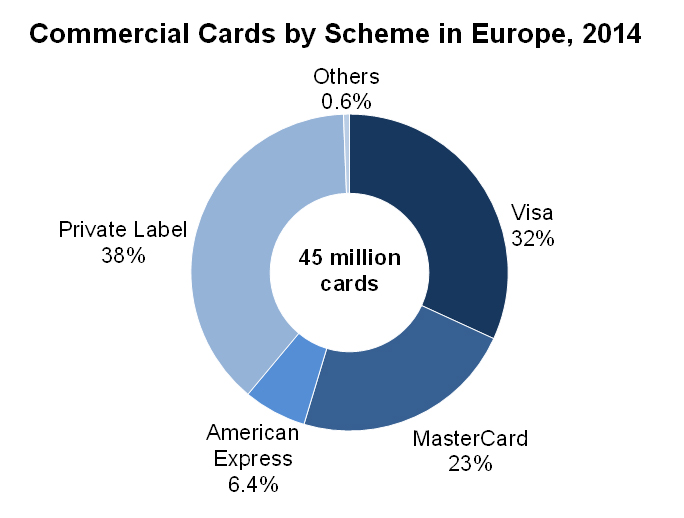 December 2015 do not apply to commercial cards, resulting in increased demand from issuers seeking to boost revenues. Card schemes will vie to create suitable products to cater for this growing demand. The report forecasts that the number of commercial cards in Europe will reach 57 million by 2020, up from 45 million in 2014.

The figures show that private label fuel cards represent the highest share of commercial cards, with 38% of such cards in issue in Europe at the end of 2014. Their share of the sector is forecast to decrease to 28% by 2020 as internationally-branded cards are increasingly promoted and hold greater appeal for the majority of businesses because they can be used for a broader range of expenses.

Visa, MasterCard and American Express account for virtually all internationally-branded commercial cards. Visa’s strong position in the UK and France – two of the largest markets for commercial cards – makes it the largest international scheme overall, ahead of MasterCard and American Express. It is interesting to note, however, that MasterCard cards are more prevalent than their Visa counterparts in more of the countries surveyed in the study. MasterCard’s share rose by two percentage points in 2014, thanks to strong performances in a number of markets, including Spain, Sweden and Turkey.

Looking ahead, international schemes will increase their share of the European commercial cards market at the expense of private label fuel cards, which have traditionally accounted for the largest proportion of such cards. The study shows that there is much to be gained for schemes that can demonstrate the profitability of their products, based on interchange, financial support and other factors.