The challenge it presents to merchants, which has always been large, is now greater than ever.

This year, the focus is on some increasingly prevalent types of fraud: Friendly Fraud, Clean Fraud and Account Takeover and the techniques being used by merchants to counter them.

Meanwhile, the report examines the growth of one of the most current issues in cyber security: awareness of the Internet of Things (IoT) as a risk factor in data breach. It also then examine the growth in the application of Machine Learning techniques in combating fraud and finally covers the satisfying role of the Fraud Professional.

While relatively new threats, such as the vulnerability of data produced by the Internet of Things (IoT), have grown considerably over the past year, the biggest and most concerning issues facing merchants in 2017 were: Friendly Fraud, Clean Fraud and Account Takeover. 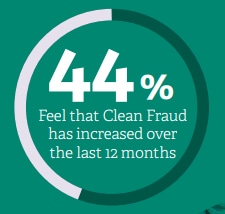 Merchants are dealing with these fraud types in different ways. Increasingly, AI and Machine Learning is playing a key role – there has been a significant growth in the deployment of machine learning software during the last year, although no organisation has turned control 100% over to automated controls. Most respondents expect this trend towards automation to continue, in order to stay ahead of fraudsters.

Merchants reported that fraud types such as Friendly Fraud, Clean Fraud and Account Takeover are all increasing. Perceived reasons for this increase vary: Friendly Fraud increases are attributed to an increasing tendency to ‘game the system’. Whereas Account Takeover is driven by professional fraudsters benefiting from the fruits of increased data breaches and more sophisticated phishing attempts. Friendly Fraud was reported as the most prevalent fraud type in 2017.

As the connection of home systems and smart devices becomes more common, data is more vulnerable, and the risk of a personal or business data breach becomes more likely. Because of this, the majority (52%) of businesses enforce a policy of restricting the installation of interconnected devices, and a similar proportion (52%) believe that we have not yet seen a peak in breaches or malicious activity from this source.

Some companies are allowing Machine Learning algorithms to make more decisions, while others are building their own tools. None of our respondents reported turning control 100% over to machine learning. This is because merchants are conscious of the need to strike a balance between automation and human judgement. However, companies are increasingly employing experienced data scientists to analyse their data for a range of applications, including fraud detection.

78% of fraud team professionals find their role highly satisfying. Our research shows that individuals are motivated by the tangible impact they have on their companies’ bottom line but also by the personal satisfaction gained by preventing a fraudster defrauding their company or an innocent cardholder.