These figures cover fraud on debit, credit, charge and ATM only cards issued in the UK. Payment card fraud losses are organised into five categories: remote purchase (card not present or CNP), counterfeit, lost and stolen, card not received and card ID theft. 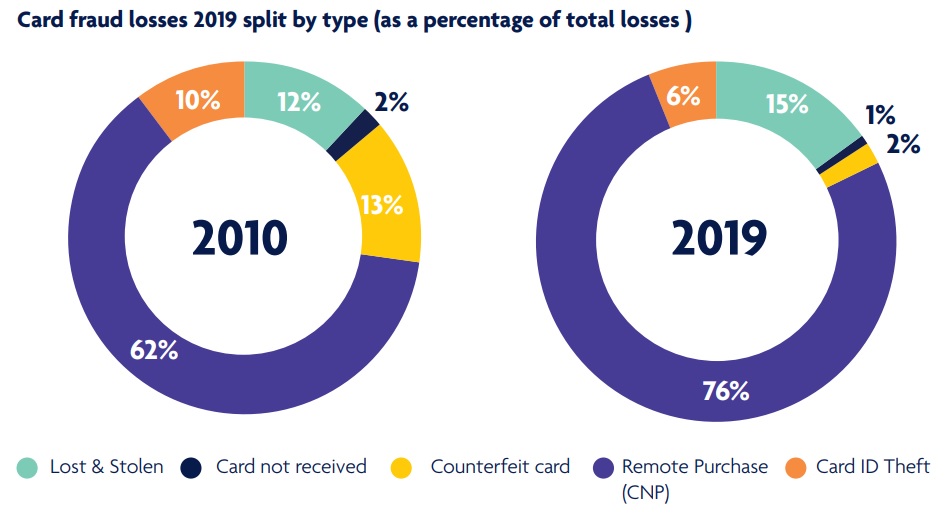 UK Finance, the author of Fraud – The Facts 2020, also publishes the number of fraud incidents to convey more fully the dynamics of the fraud environment in the UK.

Whilst losses have been decreasing, the number of confirmed cases has increased during the same period, rising by 5% to 2,745,539 cases.

This demonstrates that cases are being spotted and stopped by card issuers more quickly, with a lower average loss per case (£381 in 2010 down to £226 in 2019).

There was a rise in the number of cases involving remote purchase fraud and lost and stolen cards in 2019, which has driven the overall rise in fraud volumes.

Mail and telephone order (MOTO) fraud against retailers based in the UK also decreased, falling 5% to £87.3 million. The increase in the number of cases of remote purchase fraud of 5%, compared with the decrease in gross losses of 7%, suggests that card issuers are identifying and stopping individual incidents more quickly.

Intelligence suggests that this type of fraud results mainly from the criminal use of card details that have been obtained through data compromise, including third-party data breaches, phishing emails and scam text messages.

There have been a number of high profile data breaches affecting UK cardholders in 2019, as well as lower profile attacks, with criminals using the stolen data to make unauthorised purchases online, in particular.

Lost and stolen card fraud – Losses due to lost and stolen fraud slightly decreased in 2019, falling to £94.8 million. However, the number of incidents increased by 6% during the same period, resulting in a lower average loss per individual case. This reflects that bank systems are detecting fraudulent spending more quickly, combined with the £30 limit on individual contactless transactions. Each contactless card also has an inbuilt security feature which means from time to time cardholders making a contactless transaction will be asked to enter their PIN to prove they are in possession of their card.

Card ID theft – Losses due to card ID theft decreased by 20% in 2019 to £37.7 million, with the number of cases decreasing by 15% to 54,165. Intelligence suggests that the main driver of card ID theft is data harvesting by criminals through methods including phishing emails, scam texts and the theft of mail from external mailboxes and multi-occupancy buildings.