A majority of Europeans want their own governments to regulate cryptocurrency while a growing number would also support the creation of national digital currencies in order to assert some monetary independence from the European Union, a landmark poll for Euronews has found.

It also found that the majority of respondents in each country would rather their own government determine financial regulations, compared to roughly a quarter overall who favoured the EU to make these decisions.

The large-scale poll carried out exclusively by Redfield & Wilton Strategies is the most extensive of its kind conducted in Europe on the topic of cryptocurrency and financial regulation.

The poll was carried out between August 4 and 10 and gauged the opinions of 31,000 respondents across 12 EU member states: Estonia, France, Germany, Greece, Hungary, Italy, Latvia, Lithuania, the Netherlands, Poland, Portugal and Spain. 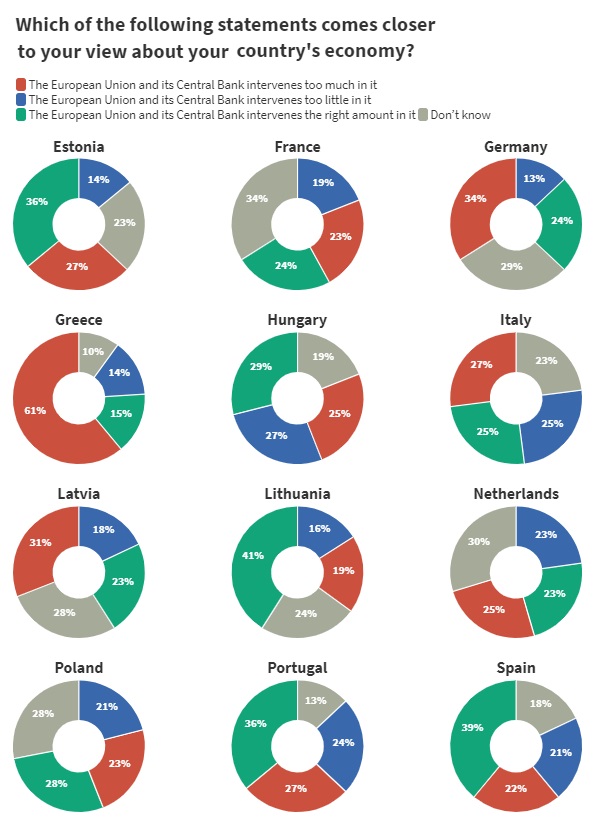 Shifting away from cash

The results come as the European Commission begins considering new legislation in September to create a new EU-wide regulatory framework for crypto assets.

The COVID-19 pandemic has been marked by increased EU focus on the financial health of the eurozone, including the approval of an unprecedented COVID-19 recovery fund totalling €750 billion in June.

It has also seen a significant shift away from cash to digital options, a trend banking institutions, like the European Central Bank (ECB), are closely monitoring.

There was significant disagreement, however, over how much influence the ECB should have in member states’ economies.

A significant proportion of citizens in Greece (61%), Germany (34%) and Latvia (31%) believed the EU and ECB intervened too much in their country’s economy.

“The lengthy hangover from the euro crisis a decade ago can still be felt in countries like Greece and Italy,” Dimitar Lilkov, a Research officer at the Wilfried Martens Centre for European studies in Brussels said.

“A large chunk of the population is still convinced that the crisis came about because of bad decisions on the EU level and not because of severe deficiencies in their national banking sector, soaring public debt and unreformed labour markets.” 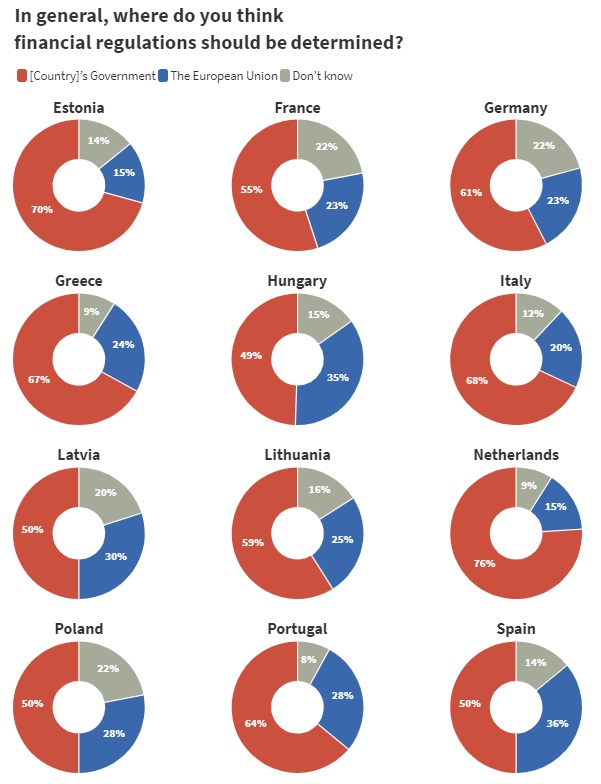 The idea of creating a national e-currency specifically in order to assert monetary independence from the EU drew a mixed reaction although a plurality of respondents were in favour to some degree.

Those in Italy (41%), Greece (40%), Estonia (39%) and Spain (37%) registered the highest support for the initiative, while the Netherlands was the only country where there were more opposed than in favour (37%).

In Germany, there was no agreement on the issue with 30% indicating that they would support it while 30% opposed it.

Over a quarter of participants across the board would neither support nor oppose such a move.

Moves to consider digital currencies – which unlike decentralised cryptocurrencies are backed by a central bank – are growing around the world with countries like China, the United States and Britain all investigating the possibility of creating a virtual version of their fiat (physical) currency.

In Europe, the ECB announced in July that it was actively looking at launching a digital euro, or “e-euro”, while in non-euro EU member state Sweden, a pilot for an e-krona is already underway.

But for countries that use the euro, membership of the single currency could stop any plans for national e-currencies in their tracks, Lilkov said.

“Eurozone countries who want to make use of a digital currency would be bound to a potential digital euro, run by the ECB in coordination with the eurozone banking system,” he said.

“For a country like Greece or the Netherlands to opt for a national digital currency different from the euro (a hypothetical e-drachma or e-Guilder), this would mean seceding from the Eurozone. This will not happen”. 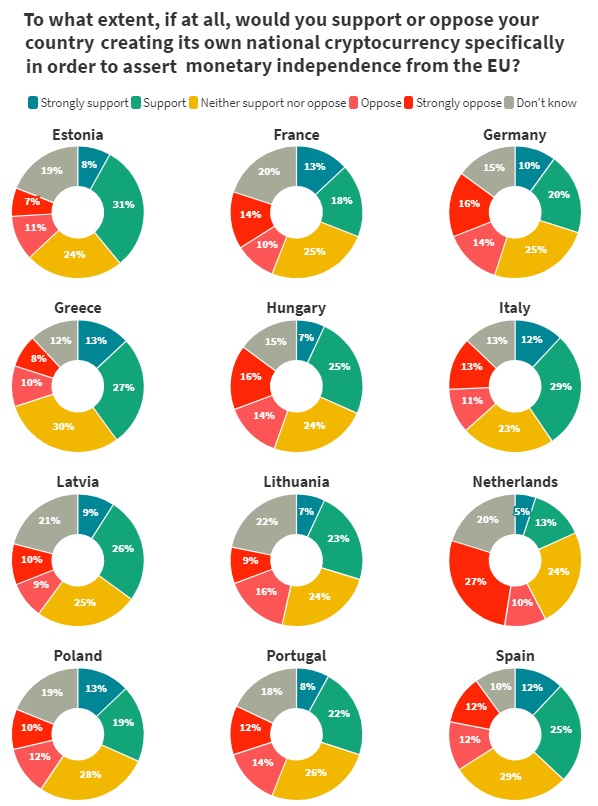 The poll also shows most Europeans have only heard “a little bit” about cryptocurrencies. A lack of knowledge is cited as the main reason why they avoid purchasing them.

The minority of people who own cryptocurrency do so for the prospect of high returns and reasons of personal interest. Bitcoin is also by far the best-known cryptocurrency, according to the poll.

While the use of cryptos remains low across the EU, according to the poll, their rising popularity raises the question of regulation, how it is done and by whom.

In an analysis of the poll for Euronews Next, Louisa Idel, Head of European Insights at Redfield & Wilton Strategies, believes these questions will prove contentious.

“In essence, regulators around the world face two options: to tightly control and centralise the future direction of crypto assets, for example through the creation of a Central Bank Digital Currency (CBDC), or to adopt an open legal and regulatory framework that allows stablecoins, especially those pegged to multiple currencies to operate smoothly,” she wrote.

“If the EU chooses the former approach of creating a CBDC, it is unlikely to win”.