The latest version of the European Central Bank fraud report is now available. The report, Seventh report on card fraud, analyses trends in card fraud in 2019 as reported by card payment schemes active in the euro area.

The analysis focuses on data for 2019, which are put into the context of a five-year period from 2015 to 2019. Card payment schemes active in the euro area report data broken down by Single Euro Payments Area (SEPA) country, covering almost the entire card market.1 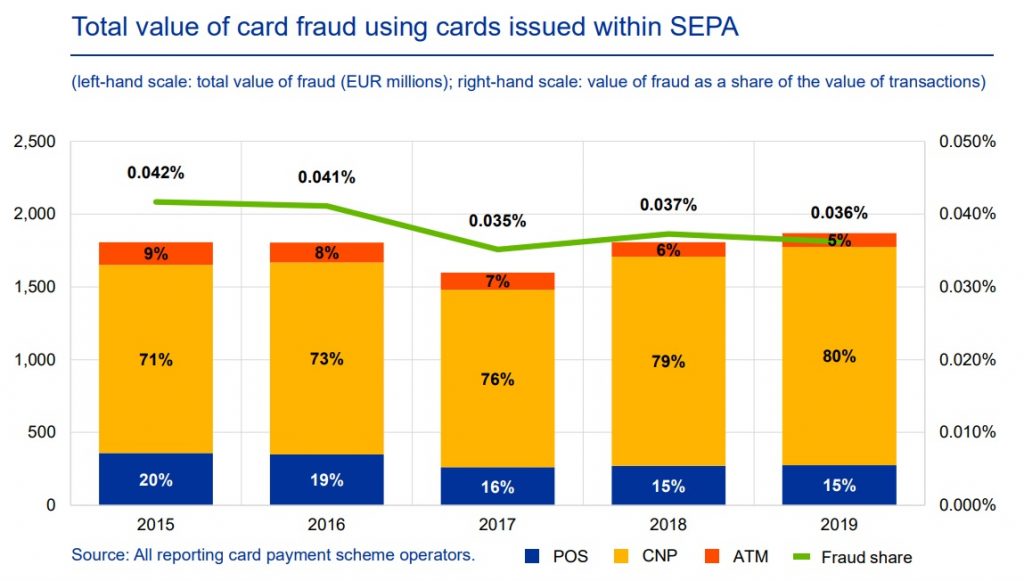 Fraud as a share of the total value of transactions

The vast majority of fraudulent transactions continue to be related to card-not- present (CNP) fraud. In 2019 80% of the value of card fraud resulted from CNP transactions, i.e. payments via the internet, mail or phone.

In contrast, fraudulent transactions at physical point-of-sale (POS) terminals such as face-to-face payments at retailers or restaurants and at automated teller machines (ATMs) only accounted for 15% and 5% of the total value of card fraud in 2019 respectively.5 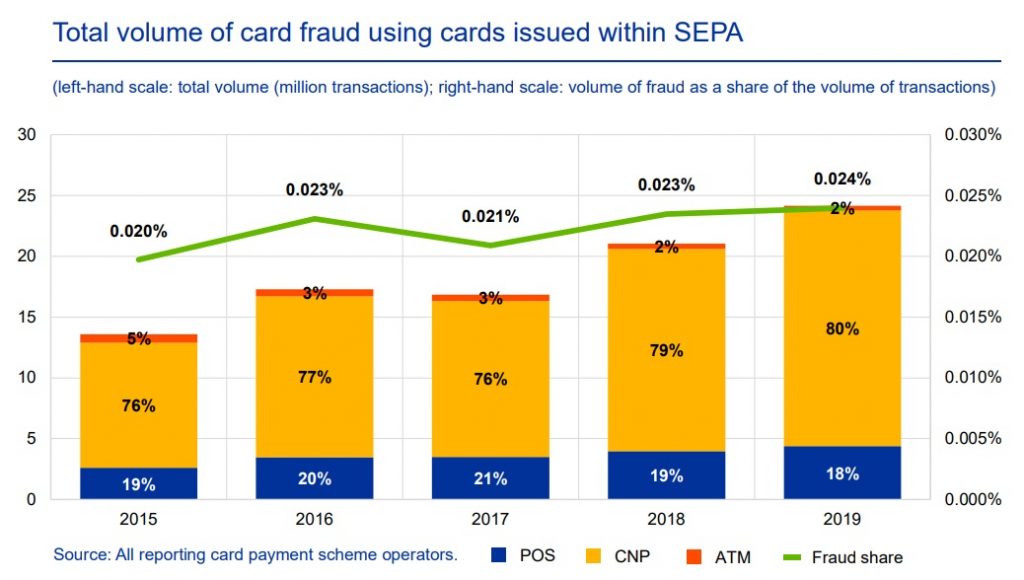 Further reductions in European fraud shares are expected with the implementation of the Regulatory Technical Standards (RTS) for strong customer authentication (SCA) and common and secure open standards of communication (CSC) under the revised Payment Services Directive (PSD2).

The share of fraud in the total value of transactions was lower from 2017 to 2019 than in previous years. This was supported by the implementation of various fraud prevention measures by payment service providers (PSPs) and card payment schemes, such as EMV standards, card tokenisation and geo-blocking, along with efforts by European regulators to strengthen the security requirements for card payments with PSD2.

Implementation of the RTS for SCA and CSC under PSD2, which entered into force in 2019, should make card payments even more secure and reduce opportunities for fraud. The full effect of these regulatory measures was expected to materialise following market-wide implementation by 31 December 2020. The first experiences reported by individual card payment schemes already appear encouraging, although it is too early to draw market-wide conclusions.

Overall, the outlook on card fraud has improved slightly since the last edition of this report, but industry, regulators and consumers need to remain vigilant. Although fraud in relative terms decreased slightly in 2019, overall levels remain persistent and are increasing in absolute terms.

Moreover, the recent surge in card payments for online purchases during the COVID-19 pandemic may increasingly make such payments the target of criminal activities (e.g. by phishing).

Consequently, card payment schemes and their participating PSPs are encouraged to continue to exchange information related to fraud prevention and best security practices.

PSPs also need to go on fighting fraud and provide secure payment solutions to end users. It is important for them to be supported in this by the merchants, as they play a key role in the successful implementation of these solutions.

1       Unless otherwise specified, total figures in this report (transactions, fraud, fraud shares) refer to values and cover the SEPA perspective from an issuing point of view. Country-based tables throughout the report reflect EU Member State figures. On occasions, where relevant, the euro area total figures (EA19) are also provided.

2     The general information on card usage, data collection methodology and classification provided in the first report on card fraud is not repeated in this version (see “Report on Card Fraud”,      ECB, July 2012).

3       The “issuing country” is the country of the card issuing payment service provider.

5     The same trend is observed with respect to fraud volumes, although ATM fraud was even less prevalent in terms of volumes, while card-present fraud at POS terminals was more common.

6        Most implementations of chip-and-PIN are based on EMV as the industry standard for card transactions at POS terminals and ATMs.