Digital transactions in Europe bombarded with a 30% increase in cyberattacks

ThreatMetrix has announced new data revealing a 30% year-on-year increase in the volume of cyberattacks hitting Europe in the first quarter of 2018.

The ThreatMetrix Q1 2018 Cybercrime Report: Europe Deep-Dive reveals evolving attack trends and how they differ across the region. This is based on analysis of 1.9 billion digital transactions on the ThreatMetrix Network in Europe. 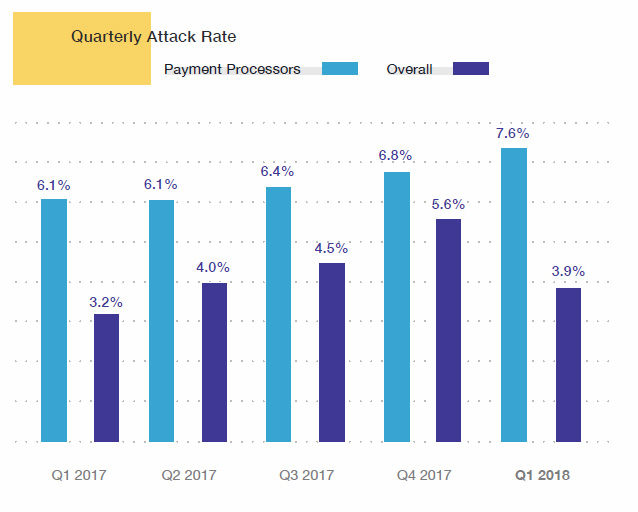 As attacks patterns morph across the region, European digital businesses were hit with 80 million fraud attempts, as they experienced more pronounced spikes of peak attack periods throughout Q1 2018 compared to previous years. There has been an evolution from short, isolated peaks of fraud attacks to more sustained, high-volume attacks across a number of days or even weeks. As a result, the onus is upon European digital businesses to invest in innovative, real-time security capabilities that are robust enough to withstand these intense periods of attack.

Identity spoofing is seeing a significant uptick across the region, resulting from the vast swathes of stolen personal data now available on the dark web. In Germany, for example, identity spoofing attacks have more than doubled compared to Q1 2017. The high volume of attacks originating from Germany across the board led to the country featuring in the list of the top five perpetrators of attacks globally, alongside the UK.

The downstream effect of identity abuse in the wake of major data breaches is particularly felt within the European e-commerce market, the industry that is being hit the hardest with regards to sheer volume of attacks.

60 million e-commerce transactions were rejected as fraudulent in Q1, which is a 47% increase over the previous year. There is a particular focus on identity testing activities targeting this sector, with fraudsters looking to capitalise upon the low-friction approach taken by many merchants aimed at increasing online revenues and encouraging customer loyalty in a fiercely competitive market.

“As European digital businesses face intense onslaughts of identity abuse and fraud attacks, they need to prioritise investments in new technologies that give insight into true identity of their users in a way that is invisible to the consumer,” says Alisdair Faulkner, Chief Products Officer at ThreatMetrix. “This enables them to provide the low-friction experience they need to grow their business, without compromising on security.”

Europe Turns to Mobile as the Secure Digital Channel

The banking sector is helping to drive this uptick in mobile transactions, for example in the UK 73% of all banking transactions were from mobile. Not only does mobile banking suit the on-the-go modern consumer, and encourage loyalty due to increased user engagement, it is also proving to be the more secure channel.

“When employing the correct technology, the mobile channel offers a wealth of opportunities to effectively identify consumers in a way that is persistent and reliable, but totally invisible to the user,” concludes Faulkner. “Mobile users have zero tolerance for being slowed down by clunky security steps, but the future of this channel relies on the continued ability of digital businesses to offer consumers peace of mind that their identity and financial information is secure.”

The post Digital transactions in Europe bombarded with a 30% increase in cyberattacks appeared first on Payments Cards & Mobile.