In an interesting report, Cifas has released new figures showing a 52% rise in young identity fraud victims in the UK.

The figures have been published on the same day as a new short film, Data to Go, is launched online to raise awareness of this type of fraud.  Filmed in a London coffee shop in March this year, the film uses hidden cameras to capture baffled reactions from people caught in a stunt where their personal data, all found on public websites, is revealed to them live on a coffee cup.

Identity fraud happens when a fraudster pretends to be an innocent individual to buy a product or take out a loan in their name. Often victims do not even realise that they have been targeted until a bill arrives for something they did not buy or they experience problems with their credit rating.

To carry out this kind of fraud successfully, fraudsters usually have access to their victim’s personal information such as name, date of birth, address, their bank and who they hold accounts with. Fraudsters get hold of this in a variety of ways, including through hacking and data loss, as well as using social media to put the pieces of someone’s identity together. 86% of all identity frauds in 2015 were perpetrated online.

People of all ages can be at risk of identity fraud but with growing numbers of young people falling victim, Cifas is calling for better education around fraud and financial crime. 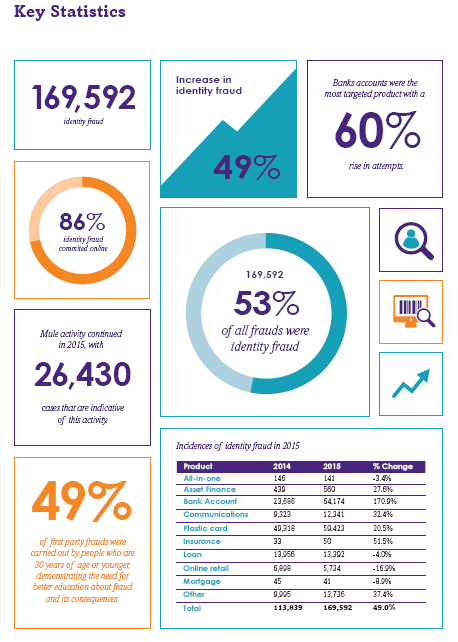 “Society, government and industry all have a role in preventing fraud, however our concern is that the lack of awareness about identity fraud is making it even easier for fraudsters to obtain the information they need.

“The likes of Facebook, Twitter, LinkedIn and other online platforms are much more than just social media sites – they are now a hunting ground for identity thieves. We are urging people to check their privacy settings today and think twice about what they share.

Social media is fantastic and the way we live our lives online gives us huge opportunities. Taking a few simple steps will help us to enjoy the benefits while reducing the risks. To a fraudster, the information we put online is a goldmine.”

“We have known for some time that identity fraud has become the engine that drives much of today’s criminality and so it is vitally important that people keep their personal information safe and secure,” comments Commander Chris Greany, City of London Police and national co-ordinator for economic crime.

“In the fight against fraud, education is key and it’s great that Cifas and its members are taking identity fraud seriously and working together to raise awareness of how the issue is now increasingly affecting young people through the launch of this film.”

As part of the campaign, Cifas commissioned a survey with Britain Thinks to find out more about 18-24 year olds’ attitudes towards personal data and identity fraud. The survey found that young people are alarmingly unaware that they are at risk:

They are also less likely to install anti-virus software on their mobile phone than the national average (27% compared to 37%).

Organisations such as City of London/Action Fraud, Get Safe Online, HMG’s Cyber Streetwise campaign, Financial Fraud Action UK, and Cifas members including Coventry Building Society, BT and Secure Trust Bank are all supporting the campaign and sharing the film across their social media networks. Cifas is also appealing to youth organisations, schools and universities to share the film so it reaches as many young people as possible.