IBM and Ponemon Institute have release the 2016 Cost of Data Breach Study: Global Analysis. According to the research, the average total cost of a data breach for the 383 companies participating in this research increased from $3.79 to $4 million.

The average cost paid for each lost or stolen record containing sensitive and confidential information increased from $154 in 2015 to $158 in this year’s study. In addition to cost data, the global study looks at the likelihood of a company having one or more data breach occurrences in the next 24 months. It is estimated a 26% probability of a material data breach involving 10,000 lost or stolen records.

We define a compromised record as one that identifies the individual whose information has been lost or stolen in a data breach.

Seven global megatrends in the cost of data breach research

Over the many years studying the data breach experience of 2,013 organizations in every industry, the research has revealed the following seven megatrends. 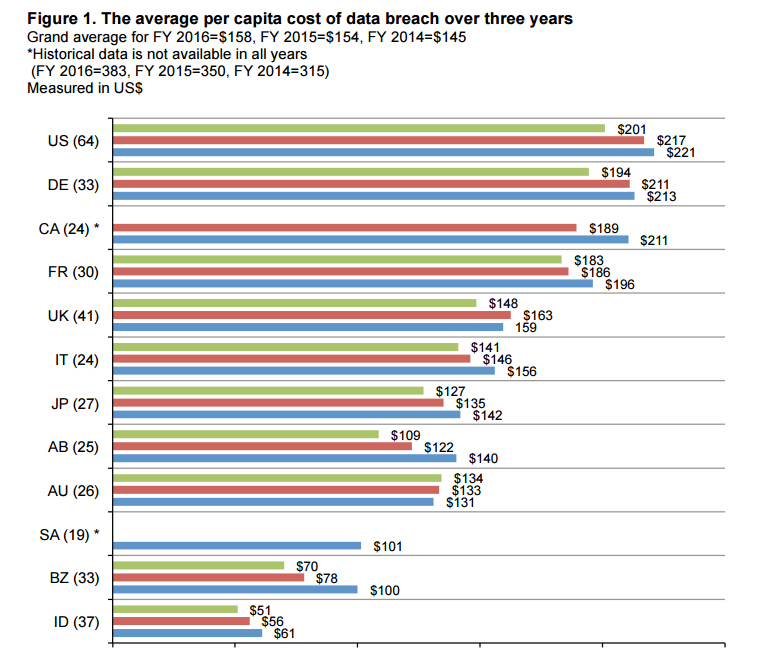 The following are the most salient findings and implications for organizations:

Data breaches cost the most in the US and Germany and the lowest in Brazil and India. The average per capita cost of data breach was $221 in the US and $213 in Germany. The lowest cost was in Brazil ($100) and India ($61). The average total organizational cost in the US was $7.01 million and in Germany $5.01 million. The lowest organizational cost was in India ($1.6 million) and South Africa ($1.87 million).

Hackers and criminal insiders caused the most data breaches. 48% of all breaches in this year’s study were caused by malicious or criminal attacks. The average cost per record to resolve such an attack was $170. In contrast, system glitches cost $138 per record and human error or negligence was $133 per record. Companies in the US and Canada spent the most to resolve a malicious or criminal attack ($236 and $230 per record, respectively). India spent far less ($76 per record).

Malicious or criminal attacks vary significantly by country. 60% of all breaches in the Arabian Cluster and 54% of all breaches in Canada were due to hackers and criminal insiders. Only 37% of all data breaches occurring in South Africa were due to malicious attacks. Instead, South African companies had the highest percentage of human error data breaches and Indian organization were most likely to experience a data breach caused by a system glitch or business process failure (37% and 35%, respectively).