The 2016 Breach Level Index Report has been published revealing that cyber criminals managed 1,792 data breaches leading to almost 1.4 billion data records being compromised worldwide during 2016, an increase of 86% compared to 2015. 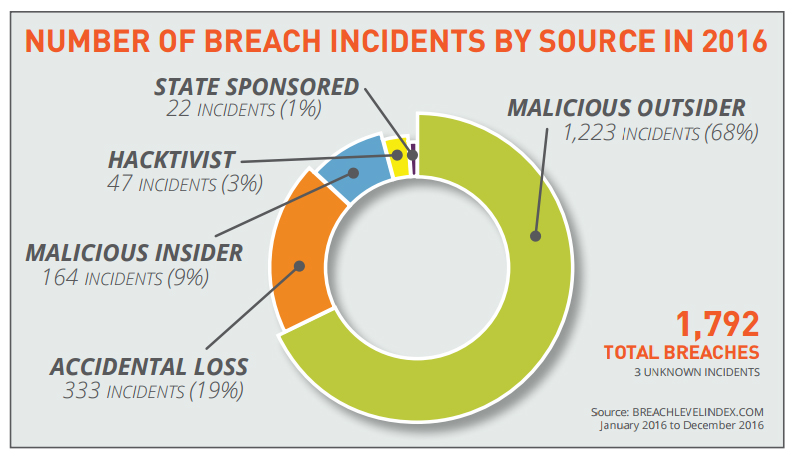 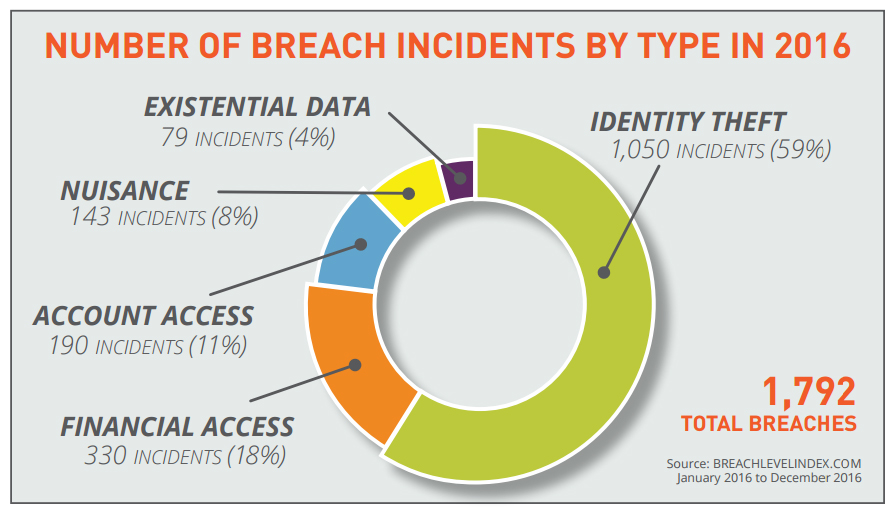 Identity theft was the leading type of data breach in 2016, accounting for 59% of all data breaches. In addition, 52% of the data breaches in 2016 did not disclose the number of compromised records at the time they were reported.

The Breach Level Index is a global database that tracks data breaches and measures their severity based on multiple dimensions, including the number of records compromised, the type of data, the source of the breach, how the data was used, and whether or not the data was encrypted. 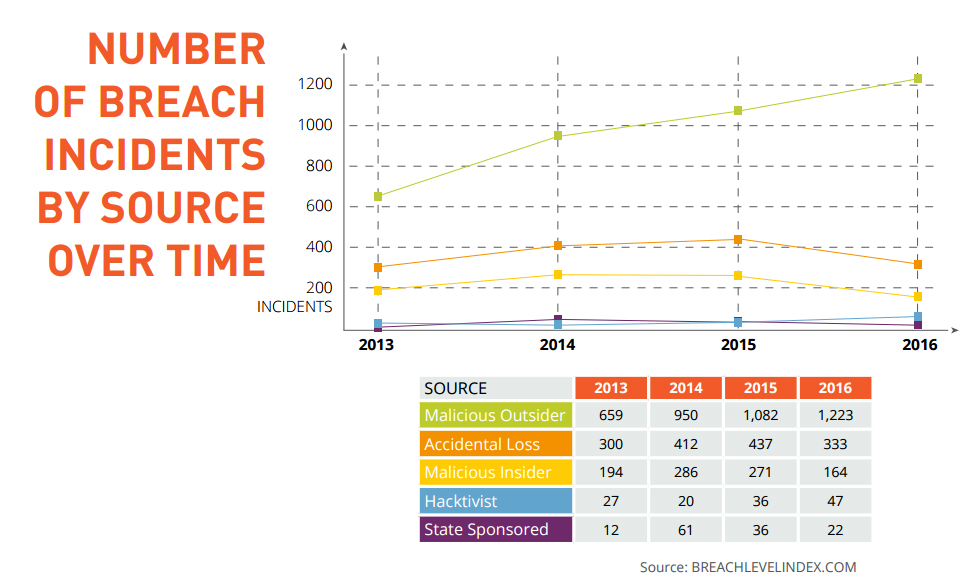 By assigning a severity score to each breach, the Breach Level Index provides a comparative list of breaches, distinguishing data breaches that are a not serious versus those that are truly impactful (scores run 1-10).

According to the Breach Level Index, more than 7 billion data records have been exposed since 2013 when the index began benchmarking publicly disclosed data breaches. Breaking it down that is over 3 million records compromised every day or roughly 44 records every second.

“The Breach Level Index highlights four major cyber criminal trends over the past year. Hackers are casting a wider net and are using easily-attainable account and identity information as a starting point for high value targets,” comments Jason Hart, Vice President and Chief Technology Officer for Data Protection at Gemalto.

“Clearly, fraudsters are also shifting from attacks targeted at financial organizations to infiltrating large data bases such as entertainment and social media sites. Lastly, fraudsters have been using encryption to make breached data unreadable, then hold it for ransom and decrypting once they are paid.”

Data Breaches by Type
In 2016, identity theft was the leading type of data breach, accounting for 59% of all data breaches, up by 5% from 2015. The second most prevalent type of breach in 2016 is account access based breaches. While the incidence of this type of data breach decreased by 3%, it made up 54 % of all breached records, which is an increase of 336% from the previous year.

This highlights the cybercriminal trend from financial information attacks to bigger databases with large volumes of personally identifiable information. Another notable data point is the nuisance category with an increase of 101% accounting for 18% of all breached records up 1474% since 2015.

Data Breaches by Source
Malicious outsiders were the leading source of data breaches, accounting for 68% of breaches, up from 13% in 2015. The number of records breached in malicious outsider attacks increased by 286% from 2015. Hacktivist data breaches also increased in 2016 by 31%, but only account for 3% of all breaches that occurred last year.

Data Breaches by Industry
Across industries, the technology sector had the largest increase in data breaches in 2016. Breaches rose 55%, but only accounted for 11% of all breaches last year. Almost 80% of the breaches in this sector were account access and identity theft related. They also represented 28% of compromised records in 2016, an increase of 278% from 2015.

Last year 4.2% of the total number of breach incidents involved data that had been encrypted in part or in full, compared to 4% in 2015. In some of these instances, the password was encrypted, but other information was left unencrypted. However of the almost 1.4 billion records compromised, lost or stolen in 2016, only 6% were encrypted partially or in full (compared to 2% in 2015).

“Knowing exactly where their data resides and who has access to it will help enterprises outline security strategies based on data categories that make the most sense for their organizations,” continues Hart.

“Encryption and authentication are no longer ‘best practices’ but necessities. This is especially true with new and updated government mandates like the upcoming General Data Protection Regulation (GDPR) in Europe, US state-based and APAC country-based breach disclosure laws. But it’s also about protecting your business’ data integrity, so the right decisions can be made based on accurate information, therefore protecting your reputation and your profits.”​​​