Biometric cards upgrade: easier and cheaper than you think

With fraud shooting up during COVID-19 and consumer concerns about hygiene and theft on the rise, biometric cards are the best way to secure the contactless transactions now used for over 80% of face-to-face payments. TietoEVRY’s Steve Warner explains why upgrading to biometric cards is less complex and costly than it appears. 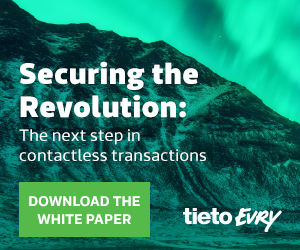 In January this year, we conducted research showing more than four in five UK consumers are concerned about infection risk when paying in store, one factor which explains why contactless transactions now account for up to 80% of all face-to-face payments.

With the UK contactless transaction limit set to rise to £100 (€110) per transaction from 6th April 2021, however, consumers are also increasingly worried about fraud and theft on their contactless cards.

These findings were replicated in sophisticated Nordic markets like Sweden, where TietoEVRY research revealed 80% of consumers are concerned about infection risk, and 57% concerned about contactless fraud.

For all these reasons, biometric cards are widely seen as the next logical step for issuers. While some might think biometrically-secured mobile wallets are the answer, research from Visa USA shows more than two-thirds of consumers prefer cards to mobile wallets as they are familiar with using them, and have concerns about data privacy on their smartphone.

Our own white paper Securing the Revolution: the next step in contactless transactions suggests around half of consumers across the UK, Sweden and Norway would switch bank to get a biometric card, while more than 80% of consumers want to take part in a biometric trial as soon as possible.

Biometric cards work via a sensor on the card which captures an image of the cardholder’s fingerprint, confirming this with a record of the fingerprint stored securely in the card’s chip. This data flow is powered by the same circuit used by the POS terminal’s near-field communication (NFC) for existing contactless cards, meaning terminal upgrades are minimal. Changes to back-end transaction processing systems to permit biometric contactless cards are likewise minor, meaning that integration costs are as low as possible.

There’s no doubt that biometrically-enabled contactless cards are more expensive than chip-and-magnetic-stripe. However, enthusiasm for biometric security is such that more than half (55.4%) of UK consumers said they would pay more for a biometric card, with 66% saying they wanted to get one as soon as possible (34%), or at some point in the next year (32%).

A recent study from Juniper Research estimates biometrics will be used to secure $2 trillion in payments by 2025 – and issuing banks must act quickly to make sure their cards remain top of wallet, rather than lose ground to mobile payment solutions offered by big tech companies. However, the switch to biometrics doesn’t need to be expensive or complicated, as our new white paper shows.

To find out more about why you need to switch to biometric payment cards, download TietoEVRY’s white paper Securing the Revolution: the next step in contactless transactions