Apple Pay usage with merchants and banks growing at 20%

In its fourth annual Apple Pay availability study, Loup Ventures identified a 20% plus increase in adoption from banks and top retailers across desktop sites, mobile web, and apps.

These growth rates, off an increasingly bigger base, suggest Apple Pay is becoming a must-have payment option for retailers and banks.

Today, the report estimates just under 30% of top retailers offer the service on desktop, ~40% on mobile, and 43% in apps. Given the majority of low-hanging fruit has now been captured, it is expected that retail adoption growth rates will decline in the next year, in combination with consumer usage rates accelerating year over year. Putting it all together, Apple Pay is increasingly becoming an effective customer acquisition and retention feature for Apple. 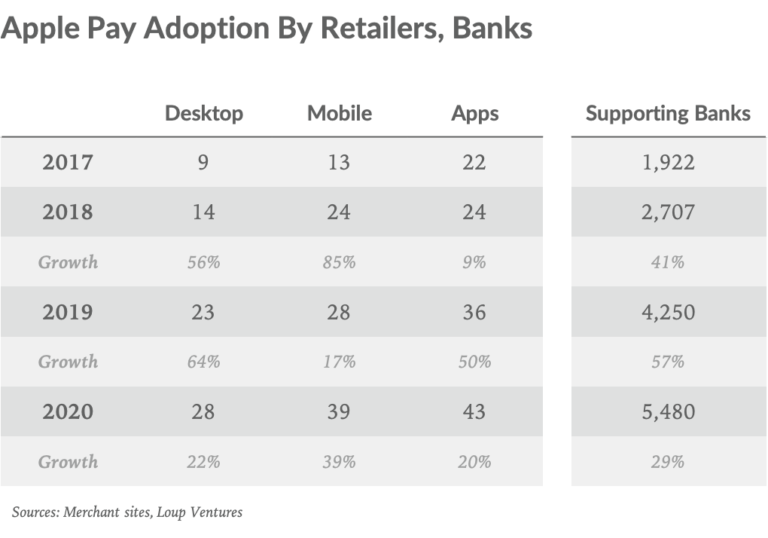 The report checks the desktop websites, mobile websites, and iOS apps of a cohort of 100 of the top online US retailers for the ability to use Apple Pay at checkout. While there is some movement in this cohort of retailers every year regarding their relevance to consumers, it keeps the list constant to maintain comparable results (see last year’s results here).

This year the report found 20% plus year on year growth across the board, with the mobile segment growing fastest:

The above findings suggest that merchants and banks continue to align their payment offerings with consumer behaviour and preference. E-commerce as a percentage of total retail shopping has roughly doubled since the start of the pandemic, growing from low teens pre-pandemic to mid-20’s today. As consumers make a greater share of their purchases online, the report states the convenience, speed, and security of digital wallets like Apple’s are becoming more apparent to consumers.

A thought on in-store adoption

Loup no longer track Apple Pay adoption at in-store POS systems. That said, in January 2019 Apple announced that Apple Pay was accepted at 74 of the top 100 US retailers and available at 65% of all US retail locations. Now, we estimate these numbers are about 95 of 100 and 85% respectively, as more consumers are using contactless payments during the pandemic to avoid spreading germs.

What is Apple saying about Apple Pay?

The short answer is not much. On Apple’s December 2019 earnings call, CEO Tim Cook reported that revenue and transactions “more than doubled year-over-year with a run-rate exceeding 15 billion transactions a year.” During the company’s September 2020 earnings call this month, Cook said, “Apple Pay is doing exceptionally well” and that “contactless payment has taken on a different level of adoption.”

How many iPhone users have activated Apple Pay?

Based on the estimates of 9% growth in active iPhones (now at 1 billion in total), along with greater usage of contactless payments during the pandemic, Loup estimate the percentage of active iPhone users that have enabled Apple Pay has increased from 441 million in Sep-19 to 507 million in September 2020.

This implies 51% of active iPhone users have set up Apple Pay, compared to the estimate of 48% a year ago. This 15% YoY growth in activations does not capture the greater growth in Apple Pay transactions, which we estimate to be growing north of 30% over the past six months.