Non-cash payment volumes are expected to continue on a high growth trajectory in 2014, according to the World Payments Report 2015 from Capgemini and the Royal Bank of Scotland (RBS).

They are projected to grow at a rate of 8.9% to reach a record high of 389.7 billion transactions,2 up from 2013’s 7.6% growth rate. Driven by a combination of factors including robust growth of non-cash transactions volumes in Emerging Asia 3 and widespread adoption of mobile technology for payments in mature markets,4 the volume of non-cash payment transactions grew faster than GDP across all geographies in 2013.  For 2014, growth is expected to have been propelled by the continued economic recovery in mature markets, rapid expansion in China, adoption of mobile and contactless technology, and the global move towards Immediate Payment 5 schemes. 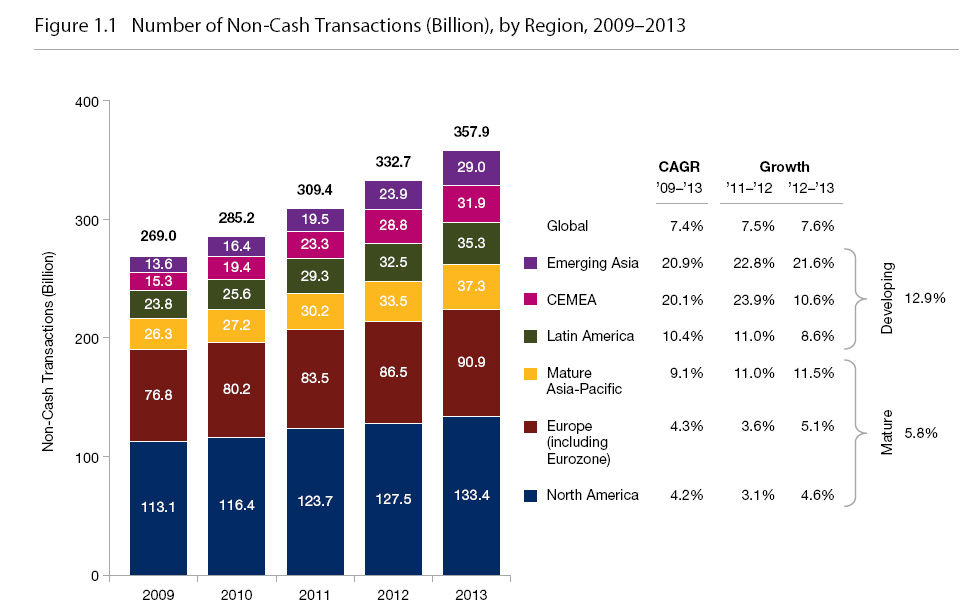 Non-cash transactions in Emerging Asia are expected to have grown by 27% in 2014 from 22% in 2013 driven by increasing internet use and the adoption of mobile payments. In particular, non-cash payment volumes in China are expected to surpass those in Germany, the UK, France, and South Korea, moving it into fourth position globally, behind the US, Eurozone, and Brazil in first, second and third place respectively. China posted record non-cash payment growth of 37.7% in 2013 as regulators accelerated the opening of the domestic payments card market to overseas competition and point of sale terminals were rolled out across the country. Mobile payments also grew significantly in volume – by 170% – to reach 4.5 billion transactions, making it a core element of China’s payments ecosystem.

Hidden payments, or payments processed through non-bank systems, are now estimated to be as big as around 10% (40.9 billion) of non-cash transactions in 2014 and are expected to grow in the coming years. The lack of coherent data on hidden payments, which include payments made through closed loop cards and mobile apps, digital wallets mobile money, and virtual currencies makes it challenging for banks and non-bank payment services providers in determining optimal operating and processing models in such markets.  As hidden payments are not subject to regulation, there are also concerns about the lack of consumer protection on data privacy, information security, dispute resolution as well as fighting fraud and money laundering and regulation is needed to minimize these risks.

Banks still in a strong position to offer customer-centric innovation

Despite the rise of other competitive payment providers along with new and alternative payment methods including digital wallets and mobile apps, banks are still in a strong position to develop innovations that improve the customer experience. Banks are better positioned than their alternative provider rivals to provide holistic solutions across all instruments and channels which make them more efficient as a single provider of payment services as opposed to having multiple providers for each payments scenario.  As banks continue to enhance their holistic solution offerings, Immediate Payment systems can act as an enabler for banks to develop new value-add propositions and drive business growth.  Immediate Payment systems allow money to be moved from one account to another within seconds, 24 hours a day, ensuring customers can use incoming funds just as quickly.

Regulation also has a role in driving innovation through the harmonization required for the cohesive global expansion of Immediate Payment schemes.  According to the WPR 2015, 86% of payment executives surveyed believe that regulators will need to evaluate and make changes to the existing regulation to make Immediate Payments a reality globally. In particular, the adoption of Immediate Payments is challenged by a lack of interoperability of systems built using different standards in Europe and around the globe.  Regulators can help resolve this by working to develop and guide standards and rules to support industry interoperability.

Another development re-shaping the payments market is Blockchain technology.6  Three key features of Blockchain are transparency, decentralization and key signing permission 7. This mix has the potential to improve the efficiency of financial transactions and transform the global financial network.  This technology could accelerate the velocity of money and provide an alternative for legacy banking systems in the future.

“New technology is accelerating change in the payments industry, offering holistic solutions as customers move from physical to digital payments as evidenced by the adoption of contactless in the UK with 53m transactions in March 2015. As a trusted partner, we’re at the heart of client transactions, facilitating the transition to digital payments,” comments Marion King, Director of Payments, RBS.

“As the digital economy transforms innovation in technology, it in turn gives customers greater choice and convenience in how they pay and conduct business.”

[2] The World Payments Report 2015 is an annual report which examines the latest developments in the global payments landscape, including payments volume trends, payment instruments (such as cards and checks), key regulatory initiatives and their impact on strategic considerations and options for banks. The transactional data in the report is from 2013. It makes a projection for 2014. Data is not yet available for 2015.

[4] Mature Markets are: Mature Asia-Pacific including Australia, Japan, Singapore, and South Korea; Europe, including the Eurozone; and North America (the U.S. and Canada).

[5] Immediate Payment schemes, also known as real-time payments, allow money to be moved from one account to another within seconds, 24 hours a day, ensuring customers can use the funds just as quickly.

[6] Blockchain is a new technology initially used to support Bitcoin and cryptocurrencies which is based on federating independent computing power to capture and record transactions.

[7] In key signing permissions, the security of transactions is based on multiple synchronous validations from network participants.