Wells Fargo & Company say that debit card customers can use the company’s ATMs without their card with NFC functionality that is launching at more than 5,000 ATMs across the US. 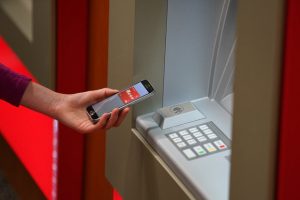 The feature is activated using a mobile phone’s mobile wallet feature. Today, more than 40% of Wells Fargo ATMs have functioning NFC capability, with the goal of upgrading the rest of the company’s more than 13,000 ATMs with the hardware by 2019.

“The NFC functionality is a second form of card-free access and is an extension of our promise to reach our customers wherever they are and provide value using the mobile option with which they are so comfortable.”

“According to Forrester, by 2021, mobile payments volume in the US will triple,” continues Jim Smith, head of Virtual Channels. “Our customers are increasingly using mobile to manage their finances and make payments, which makes it ever important for Wells Fargo to provide our more than 20 million mobile banking and mobile wallet customers with a seamless mobile authentication and access experience at our ATMs, online, and in our branches.”