This trend is somewhat puzzling given that debit growth had exceeded credit growth every year from 1993 to 2011, often by a substantial margin. Several factors have likely contributed to this reversal, including the natural deceleration of debit growth, the effects of the business cycle, and recent regulatory, fraud, and technology trends. 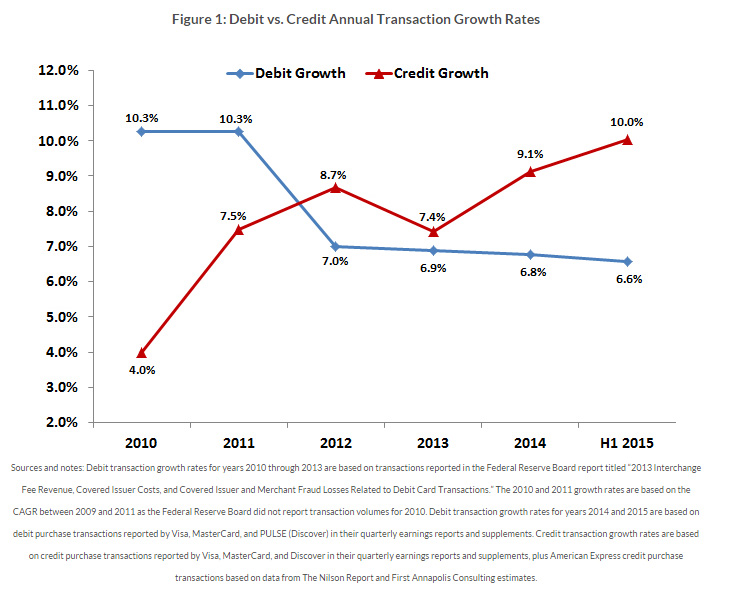 Debit’s transition from a high growth phase of its product lifecycle to a higher degree of maturity has been a key development in closing the growth gap between debit and credit. Generally, consumers have tended to favor credit for travel, entertainment, and higher ticket discretionary purchases, while preferring debit for non-discretionary “everyday” purchases (e.g., supermarkets, gas stations, quick service restaurants) – writes Ryan Feeley, Manager,specializing in Debit and Prepaid at First Annapolis.

While the use of credit cards for T&E and big ticket purchases was already well established by the mid-1990’s, cash and check were still prevalent payment types for everyday spend purchases. Between the mid-1990’s and the late 2000’s, card usage grew rapidly in everyday spend categories as a result of expanded card acceptance and shifting consumer behavior patterns that facilitated broad replacement of cash and check transactions. This growth disproportionately accrued to debit, resulting in a 29% CAGR from 1995 to 2007. However, the success of the card industry in expanding acceptance and changing cardholder behavior has reduced the remaining runway for category-driven growth, resulting in a deceleration to single digit growth for debit. This development decreased the growth differential enough to make it possible for other market trends to push credit past debit in transaction growth.

The most important source of credit’s recent growth advantage has likely been the effect of the business cycle on the relative growth rates for credit and debit.  In the aftermath of the Great Recession, many cardholders either exhausted their credit lines, lost access to credit after defaulting on their balances, or chose to avoid using credit cards after amassing significant debt. Many of these consumers shifted spend to debit cards simply because credit was no longer an option for them. Additionally, because discretionary spend categories such as travel, entertainment, and big ticket purchases tend to be more pro-cyclical than non-discretionary spend categories, credit usage was disproportionately affected by the recession even for those consumers who continued to use credit cards on a regular basis. The combination of restricted access to credit and lower non-discretionary spending resulted in an overall decline in total U.S. credit card transactions between 2007 and 2010. Since 2012, annual credit growth has exceeded 8% as many consumers have regained access to credit and discretionary spending has bounced back. Thus, credit’s higher exposure to the business cycle resulted in a sharper pullback in volume metrics during the recession, but also a more pronounced rebound during the subsequent recovery. However, this recent surge in growth has still been insufficient to offset the slowdown during the recession, as the credit transaction CAGR from 2007 to 2014 is only 3.6%. This implies that credit may still have some remaining runway for “catch-up” growth that exceeds its long-term trend.

In addition to greater headwinds from the economic recovery relative to debit, credit growth has also benefited from a number of recent market trends. First, a small segment of consumers may have shifted some of their spend from debit to credit as a result of changes that large issuers made to their card programs and marketing strategies in response to the implementation of the Durbin Amendment at the end of 2011. At this time, most large issuers eliminated their debit rewards programs and some banks also developed marketing strategies intended to shift share of spend from debit to credit. Second, increased concern over fraud as a result of high profile data breaches may have prompted some consumers to shift spend from debit to credit. Consumers tend to be more concerned about fraudster’s exhausting their bank assets (i.e., “my money”) than their credit lines (i.e., my bank’s money). Many consumers also perceive credit cards as having stronger chargeback protections than debit cards. Third, the growth in digital commerce may be disproportionately benefiting credit over debit given that consumers have historically favored credit cards for online and mobile commerce transactions.

The surprising growth advantage of credit over the past three years has been the result of decelerating debit growth from natural product lifecycle dynamics, a rebound in credit card spending from the declines of the recession, and shifts in consumer payment patterns that may have resulted from the Durbin Amendment, consumer fraud concerns, and the growth of digital commerce. However, underlying demographic trends still favor debit growth over the long term, as younger consumers are relatively more likely to use debit than older consumers. Thus, once credit catches up to a more normalized long-term growth trend, debit growth will likely regain its historical growth advantage and slightly outpace credit growth.