The way we pay for everything is changing, with more digital transactions than ever before. But how close are we to the tipping point?

This weekend saw the end of cash as Britain’s dominant method of payment, and you probably didn’t even notice.Supposedly March 8 was the date on which transactions made be via credit, debit and other cashless methods would finally outstrip those made by cash – according to an article in The Telegraph.

If you strip out large companies and focus only on individual consumers, it will take a little longer – happening in 2017 rather than 2015 – but the winds of change are only blowing in one direction.

Of course, it’s important to understand that these figures are in terms of volume,i.e. the raw number of individual transactions carried out. The value of cashless payments was already far larger than that of cash, because they’re used for much bigger transactions.

One reason the difference is so huge is because these numbers include payments made via CHAPS – the system used by big companies and even the Bank of England to shift around their vast sums of money.

Yet even if you restrict the figures only to retail – high street shops, online merchants, and all of that – the tipping point in terms of value was passed long ago.

According to the UK Cards Association, credit cards and debit cards surpassed cash in terms of value more than a decade ago, in December 2003. They now account for more than 75% of the retail sales.

Still, measuring by value isn’t actually very useful. I might make fifty small purchases with cash – say, bottles of milk at £1 each – and one large purchase with a cheque. That wouldn’t mean I did most of my shopping with cheques or that cheques were my dominant method of payment.

The first is the rise of alternate payment methods. Paypal’s users exchangedmore than £30bn in 2014, up from £18bn the previous year, and this week Barclays will start allowing people to send money to each other using only their Twitter handles.

The most significant rival for cash’s crown is contactless payment, which is starting to sweep up some of the low-value transactions which would previously have been done with cash.

These are a small part of the picture for now, but they’re growing fast; the UKCA thinks that in two years’ time they’ll make up 6% of all card transactions. 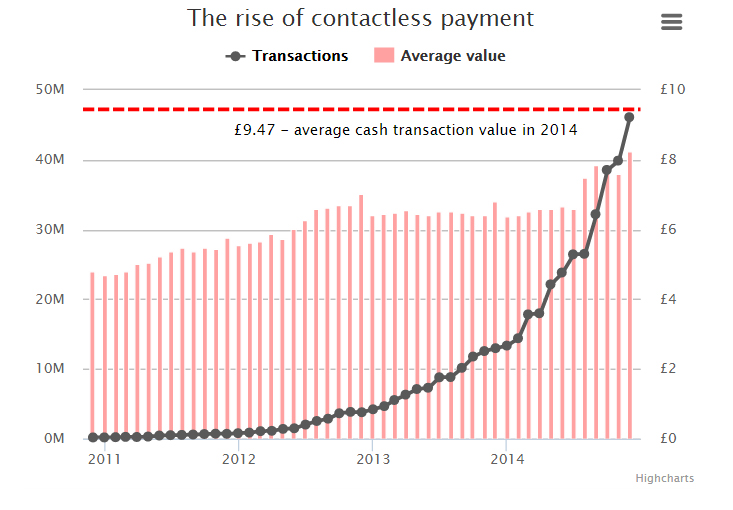 That red line on the chart is the average value of a cash transaction last year –but it’s falling, from £11.43 in 2009 to £9.47 in 2014. And as you can see on the chart, the average contactless transaction is creeping up to meet it. Cash is being relegated to smaller and smaller sums.

Not everybody is happy with that. A study in the USA suggests that contactless cards make people more likely to buy things in the first place, because beeping it on a pad is so much easier than reaching into your pocket and counting out the change.

Another study found that contactless card transactions can be intercepted using off-the-shelf technology from as much as 60 centimeters away.

But the other factor is that we’re also using our old-fashioned credit and debit cards to pay for smaller things.

Over the last few years, the average value of a card transaction has been slowly dropping, as these statistics from the UKCA make clear: 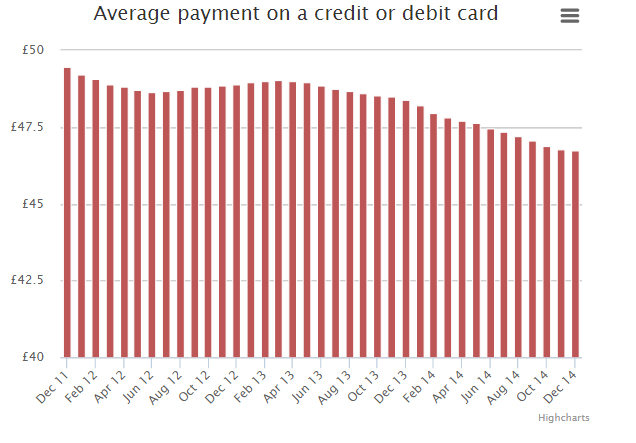 Firstly, there has been a general fall in the price of card readers and card transactions – meaning local corner shops which formerly only took cash are now more likely to offer chip and PIN services too.

Then there’s the advent of self-checkout terminals. “There’s a very high proportion of card usage at them,” says Mr Koch, “and some terminals are designed not to take cash at all.” Not taking cash makes them easier to maintain, and cheaper for their owners.

Obviously, the internet shopping revolution plays its part. The UKCA says e-commerce is rising by 13% every year because people are buying online what they might previously buy with cash.

Finally, people are now lumping what would once have been multiple cash payments together as one digital payment. Mr Koch gives the example of his children, who pay for their school lunches with a card that he tops up in batches of £20 or £30 every week.

Another example would be Netflix – which replaces rented videos with a single subscription charge – and, of course, Transport For London’s Oyster card, which replaces daily paper tickets with longer-term top-up fees. Mr Koch actuallly predicts two million fewer transactions in 2017 than there were in 2014 because of payments being amalgamated in this way.

All of this creates a kind of spiral effect, because once people become more used to using their cards, they’re less likely to carry cash. And once they stop carrying cash, retailers have to invest in card readers if they want to sell what they’ve got.

In twenty years’ time, cash could be a minority system, used regularly only by a small hardcore of people, and infrequently by everyone else. Some new technology will emerge to handle low-value transactions.

Until then, cherish the feeling of copper and zinc in your palm while you can.