A survey from payments and loyalty specialists Logic Group has found that UK consumers are embracing new technologies such as contactless and mobile payments. 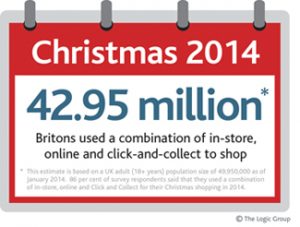 According to the survey, Christmas 2015 will be the year of “tap and pay” versus “click and collect”, a trend which will be helped by the likely increase in the contactless payment limit to £30 from the current limit of £20.

Being able to pay through a mobile device is a popular request from survey respondents (54 %), while one in five consumers is also interested in paying for goods through wearable technology (such as Apple Watch or Google Glass) or a social media account. Additionally, security (51%) and ease of use (38%) were the main drivers for consumers who want to be given more choice in how to pay for their shopping.

Security and trust remain major concerns when considering alternative methods of payment, with over half of consumers surveyed placing security as more important than any other factor when using new payment technologies. This is reinforced by two-thirds of consumers saying that they have concerns about their details being stolen as a result of using new technology for payments.

Laptops/PCs, tablets, smartphones and smart TVs were the dominant devices for online Christmas shopping in 2014. Demographically, 35-44 year olds did most of their online shopping using tablets, smartphones and smart TVs, while laptops/PCs were the dominant technology choice for the 45+ age group. Overall, the online check-out experience was completed with a preference for debit cards (44%) or PayPal (39%).

Loyalty remains very important for Britons, with nearly three-quarters (74 per cent) of consumers saying they did not do any Christmas shopping with a retailer they had never used before, while one in four used a loyalty voucher or coupon to pay for goods.