New research from Nucoro reveals that between 14th March and 14th April, because of the COVID-19 lockdown, around 12% of the adult population in the UK – some 6 million people – downloaded their bank apps for the first time.  Some 21% of those aged 35 – 34 did this, as did just over 5% of people aged 55 or more.

The research estimates that between 14th March and 14th April, around 200,000 people downloaded their bank’s app for the first time every day.

The rate of new downloads is now slowing down. One in three (33%) of these new downloads happened between 14th and 21st March compared to around 17% between 7th and 14th April. A further 6% of people who don’t yet have their bank’s app plan to download it over the next three months.

In terms of the level at which people are using their bank’s app overall, the research found that 22% are using them more, compared to 5% who have seen their use of them fall. 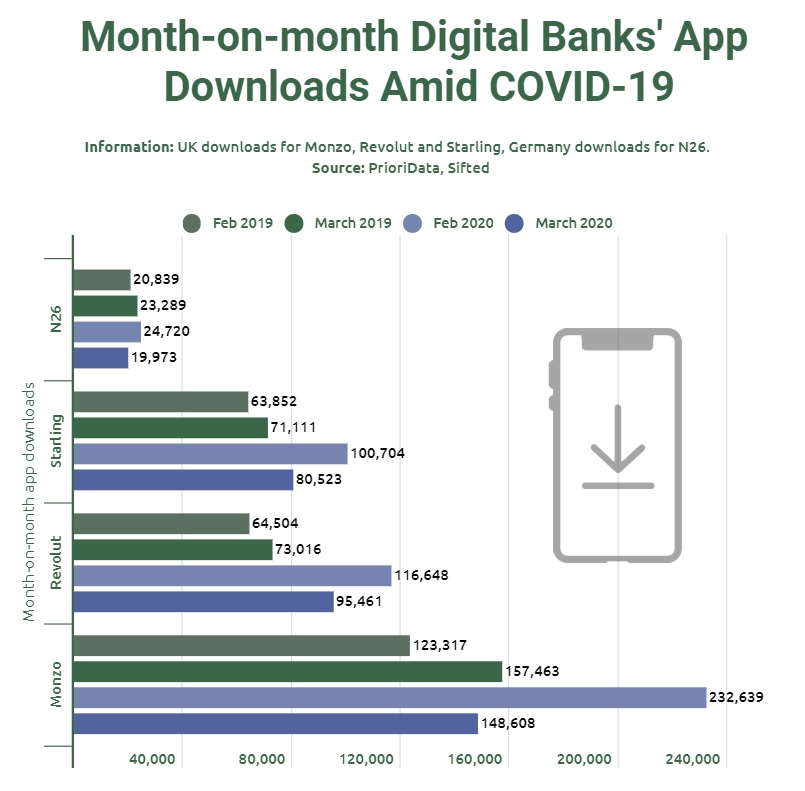 However, leading challenger banks have witnessed a significant drop in the number of new app downloads in the wake of the COVID-19 pandemic. Data compiled by Finbold indicates that on average, the challenger banks’ app downloads dropped by 23.38% by the end of March 2020 compared to February this year.

Among the leading impacted challenger banks is Monzo whose app downloads declined by -36.12%. Last month the bank only registered 148,608 downloads, a drop from February’s 232,639. During a similar period last year, the bank was on a growth trajectory in terms of app downloads registering a percentage increase of 27.68% between February (123,317) and March (157,463) 2019. 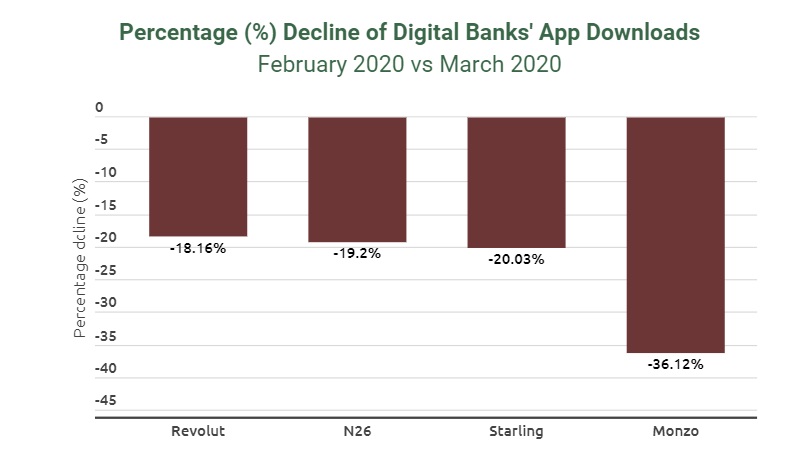 Similarly, London based Starling bank saw a drop of -20.03% in new downloads when it registered 80,523 downloads in March 2020. A month earlier the bank’s downloads stood at 100,704. Generally, the bank was emulating peers by witnessing an increase in the number of users a year earlier. Between February and March last year, the bank’s new downloads grew by 11.36%.

Notably, fluctuations in the number of new downloads for non banks is common. However, the drop across the board in March calls for a deeper analysis.

The drop in the number of sign-ups comes as a surprise. As the COVID-19 spread across the globe between February and March, paperless money transactions were the go-to thing. This is one means of curbing the virus spread. Expectations were that many people and businesses will turn to digital banks in the course of the pandemic for transactions.

“Once the COVID-19 crisis passes, for many people the way they interact with their banks will have changed permanently,” says Nikolai Hack, COO Nucoro.  “Many are increasingly happy to use apps, so there will be much more digital interaction. This will represent a strong opportunity for banks to improve customer service, reduce costs and cross sell more products and services such as investments and savings to their core banking clients.”