New research has found that the UK BNPL sector ranks as one of the most valuable on the global stage, despite sitting mid table where e-commerce market prominence is concerned. 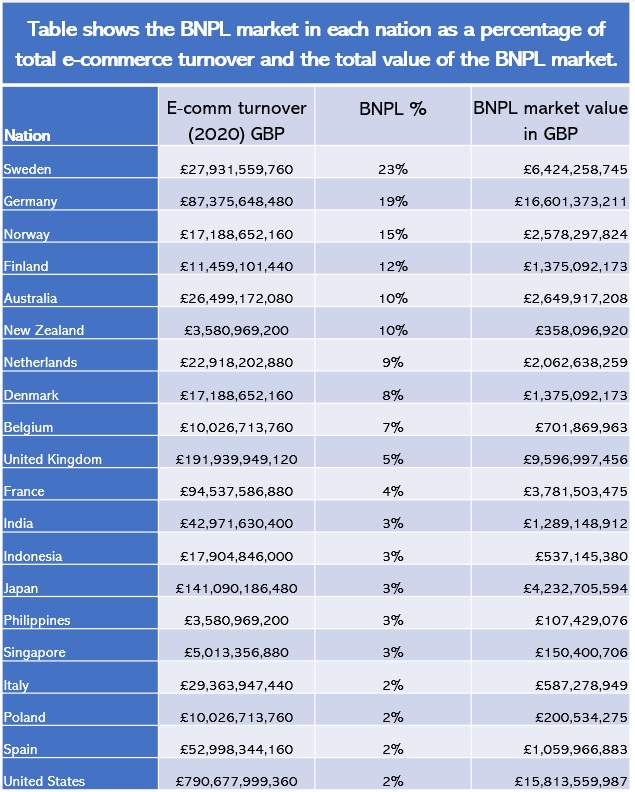 Butter analysed the BNPL market across 20 leading nations looking at what percentage of market value is currently held by the BNPL space in each nation, as well as how they compare in terms of total value.

The research shows that across the UK, the sector currently accounts for just 5% of the total value of the e-commerce market.

This puts the UK mid table in terms of BNPL prominence when compared to the other 20 nations analysed and some way behind the pack leaders.

Sweden tops the table in terms of overall prominence, with the sector accounting for a notable 23% of the total value of the e-commerce market. Hardly surprising given it’s the home nation of industry giants Klarana.

The Netherlands (9%), Denmark (8%) and Belgium (8%) also rank ahead of the UK in terms of the foothold in each nation.

However, the research shows that despite the smaller percentage of the market accounted for by BNPL in the UK e-commerce space, we’re one of the leading nations where the value of this foothold is concerned.

Despite only accounting for 5% of the value of the UK’s e-commerce market, the BNPL sector in the UK is worth just short of £10 billion according to the market analysis. This places the UK third in the BNPL market value rankings, second to just Germany and the United States where the BNPL sector is worth £16.6 billion and £15.8 billion respectively.


It also places the UK ahead of Sweden (£6.4 billion) despite the considerably larger presence of the BNPL sector within the Swedish e-commerce space.

“It’s interesting to see how the take up of the BNPL model differs around the world and this is due to a range of factors, with some adopting this method of transacting far quicker, while the sector itself has been established for longer in some countries compared to others,” says Timothy Davis, Co-Founder and CEO of Butter.

“On the global stage, the UK still has a fair bit of work to do in terms of catching the frontrunners where BNPL prominence is concerned. However, it’s fair to say that BNPL as a concept is in its relative infancy here in the UK and so this smaller market share is to be expected.

What is very reassuring is that despite only accounting for an estimated 5% of e-commerce market value, the BNPL offering in the UK already ranks in the top three internationally in value terms.”

The sector is forecast to increase in size by 175% by 2024 alone and as more consumers adopt this method of transacting, we expect to see considerable ground made having already established a very strong foothold in a relatively short period of time.