The Retail Report 2020: A new digital age dawning on the retail sector

A new retail report has conducted two international surveys focusing on the deployment of digital technologies and payment methods in retail sector, as well as consumers’ willingness to use them. The results: Around the globe, more and more people are ready for entirely new ways of paying.

For example, payment authentication using biometric features such as face, voice or body movement are becoming increasingly popular. In France, Germany, and the UK contactless payment methods are currently experiencing a real boom. But what is the willingness to adapt to these technologies and will they have significant consequences for the retail sector?

Jörn Leogrande, Executive Vice President at Wirecard Labs is convinced: “In the next five years retail will change more significantly than it has in the last 50 years.”

What do consumers think shopping will look like in five years?

Despite the global economic and health challenges, the COVID-19 pandemic has also brought about rapid digital change. This will have a lasting impact on the retail industry. A global 5,000-respondent survey conducted by Wirecard Labs, shows that consumers from across the globe are open to new payment methods. For instance, 81% of those surveyed are prepared to use the option of a so-called self-checkout, i.e. paying without a physical checkout system.

With a self-checkout, a mobile app automatically processes the payment as soon as the customer leaves the store. Most of those surveyed can also imagine paying by fingerprint or hand scan (69%), and over three-quarters (78%) of participants aged between 18 and 44 stated that they would be open to trying on items of clothing using virtual reality (VR) before buying. 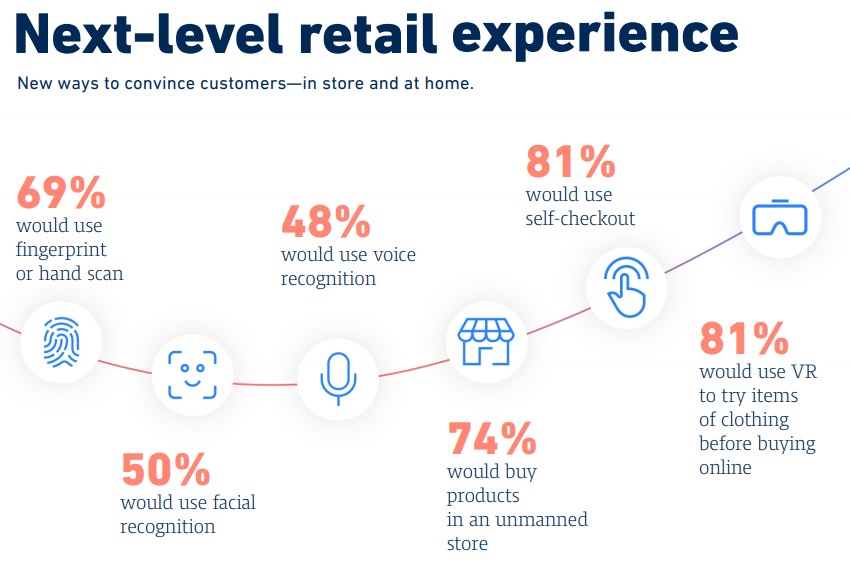 The survey also revealed that the smartphone will play an increasingly important role in the retail sector in the future. Overall, almost half of consumers worldwide (47%) already pay with mobile wallets. More than half (54%) would like to see the technology introduced or improved. The key for retailers is to ensure that their mobile offerings are seamlessly integrated into their broader infrastructure so that they can take advantage of the growing trend towards mobile shopping.

Bringing the retail industry into the home

The continuing trend towards the digitally-connected smart home is also opening up many opportunities for retailers. More than three-quarters (78%) of those surveyed said they would be likely to shop using smart home devices. Similarly, two-thirds (66%) indicated that they would reorder groceries via a smart fridge. The findings show that retailers must effectively integrate their offerings into the daily lives of their customers and bring their brands closer to them.

“Many retailers still have some catching up to do in this respect,” says Leogrande. “Even simple solutions such as paying by mobile phone or other digital payment methods are not yet widely available worldwide. Now is the time for merchants to think about investing in the latest payment technology. The current pandemic has shown very clearly that those who are digital pioneers are better positioned to tackle the crisis.”

Contactless payment is booming in Europe

A second survey commissioned by Wirecard and conducted by YouGov in France, Germany, and the UK shows how the health crisis is accelerating the transition towards cashless payments. Contactless payment options were already popular in these three countries before COVID-19, but now they have become mainstream. More than half of all respondents in all three countries are now increasingly using contactless payment methods – for example via credit, debit card or smartphone. Three out of four respondents indicated that they plan to continue using contactless payment methods frequently even after COVID-19.

The post The Retail Report 2020: A new digital age dawning on the retail sector appeared first on Payments Cards & Mobile.