The payments landscape: How Latin Americans pay for e-commerce

Credit cards are the most used payment method for e-commerce purchases in Latin America.

But that doesn’t mean these are the preferred payment methods in the region – only that they are the most offered ones by merchants in general.

Despite the progress Latin America has made regarding financial inclusion, the region is far from being cashless according to a report – A study on the state of cross-border e-commerce in Latin America.

The key historical reasons for this? Cultural habits, high degrees of informality, and, therefore, of unbanked people having a hard time accessing credit and other financial resources and services.

Consequently, local cash-based alternative payment methods – that is, all the other options except cards – are still very relevant in Latin America.

While debit and credit cards account for 65% of the e-commerce spending in Mexico, according to AMI data, the use of cash-based methods, such as the country’s traditional payment voucher OXXO, responds for 19% of the online purchases in Mexico – reflecting the still low penetration of electronic payment methods in the country.

Even innovations such as Cobro Digital (CoDi), Mexico’s instant payment system launched in September 2019, work as a digitization effort but not necessarily as a way to reduce the circulation of cash.

On the other side of this Latin American payments portrait is Chile.

The country has the region’s highest level of card penetration – +40 million credit and debit cards issued or two cards per person, according to Alliance for Financial Inclusion, Afi data – and also of card’s usage in e-commerce (accounting for 84% of the total volume processed online).

Alongside these aspects, Chile also has the highest level of access to banking services in the region (74.3% of its population, according to the World Bank’s Global Findex).

Unlike Brazil, where debit card usage for digital purchases is still gaining ground, this payment method already accounts for a large part of Chile’s online transactions.

According to AMI data projections, debit cards are expected to end 2020 accounting for 30% of the country’s e-commerce spending (something around $2.7 billion), an expressive 36% growth compared to 2018.

Simultaneously, the use of payment vouchers (Sencillito, Servipag, and Multicaja) will account for 8% of the country’s e-commerce payments volume.

“There is still a long way to go to catch up with developed economies in terms of digitalization of payment methods.

In 2019, 38% of private consumption in Chile was carried out through digital platforms, getting closer and closer to the reference countries, whose rates are above 50%,” Patricio Santelices, General Director at Transbank, the dominant acquiring company and payment processor in the country, said.

Chile is slowly opening up its acquiring market and implementing a four-party model – something that happened more than a decade ago in Brazil, spurring a series of innovations, from the spread of POS terminals throughout the country to the rise of FinTechs more recently.

According to AMI data, Latin America’s largest market is expected to end 2020 with a much larger share of payments made through debit cards and digital wallets than the previous years, with a 16% and 6% growth in volume Y-o-Y, respectively.

“Cross-border was hit hard everywhere, and the markets where you already have an advanced e-commerce environment and an important share of cross-border, that is where international cards are going to receive a biggest hit in terms of spending volume,” explains Lindsay Lehr, payments expert and associate managing director at AMI.

Domestically, the Brazilian e-commerce boom is being led by the increasing digitization and smartphone penetration, alongside the development of the payments industry itself.

An interesting thing has happened in the last couple of years: even with the accelerated digitization process, Brazilians did not stop using the boleto but “updated” the way of buying with it.

According to AMI data, while cash is still king in Mexicans daily lives, international credit cards are the most used payment method in the country’s e-commerce and are likely to end 2020 accounting for more than a third of the sector’s financial volume.

The third most relevant payment method in Mexico’s digital commerce is its most popular payment voucher, boleta OXXO.

This popular payment method allows merchants to tap into the substantial group of online buyers who don’t have a bank account or pay their purchases with vouchers for cultural reasons.

OXXO has more than 17,400 stores across the country. Through them, consumers can pay for their online purchases in cash, and merchants have a zero chance of chargeback.

In addition to digital wallets, which are expected to grow 10% this year, bank transfers are likely to show a significant increase: 20% compared to 2019.

Although in practice they should end the year accounting for only 2% of the payments within Mexican e-commerce, bank transfers seem to be gaining ground in the country’s consumer preference.

Since 2019, banks are offering the new operative of the country’s instant payment system, Cobro Digital, CoDi, that will simplify the process using QR code or push notification to complete the payment. 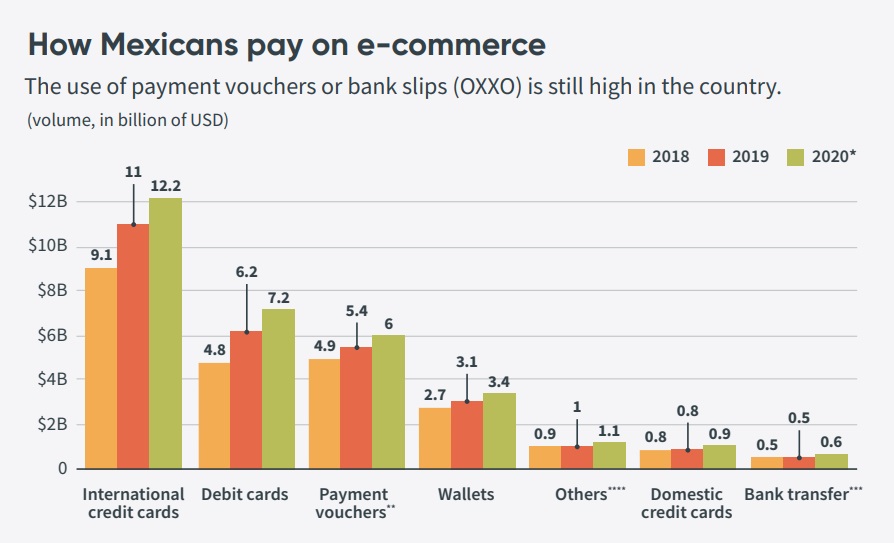 According to AMI data, Colombia has a different scenario than that of its neighbours.

While credit cards are the most used payment method for online purchases, accounting for 45% of the entire sector’s financial volume, bank transfers are also commonly used (21%) by Colombians, ahead of debit cards and digital wallets.

This happens because of the increasing internet and smartphone penetration in the country, alongside the growth of Pagos Seguros en Línea (PSE).

PSE is a network developed by ACH, an organization that monitors and controls automated transactions between banks and financial institutions, and that also attracts FinTechs eager to create fast and frictionless payment solutions.

Through PSE’s interface, consumers are redirected to their internet banking, making the transaction real-time, without needing a credit card.

As the explosion of delivery apps, especially the last-mile logistics unicorn Rappi, drives the rise of domestic e-commerce in the country, Colombian consumers are also becoming more familiar with buying from foreign websites. 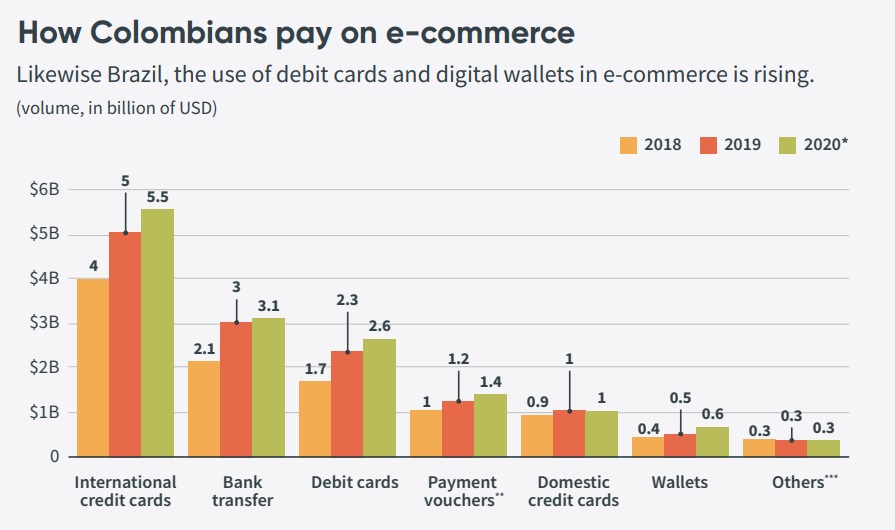 According to AMI data, the Latin American market with the highest penetration of internet and smartphones is also the one in which cards rule in e-commerce.

International credit cards, domestic credit cards, and debit cards are likely to account for more than 80% of the country’s e-commerce spending, according to AMI projections for the end of 2020.

“In Chile, there may be a decline of 35% in cross-border spending. As internationally enabled cards are the number one payment method for cross border spending, it is natural that this method loses volume this year,” explains Lindsay Lehr, payments expert and associate managing director at AMI.

But while international credit cards are set to lose share among the country’s main payment methods – alongside payment vouchers – the use of domestic credit cards and digital wallets is skyrocketing among Chilean consumers.

There are some possible explanations for that. One of them is the expectation around opening the country’s acquiring market (read more about it here) and how this regulatory change might help the domestic payments industry to evolve and attract international players to Chile.

Another possible explanation comes from the success that digital wallets have in the country, boosted by the highest internet and smartphone penetration in Latin America.

The latest World Bank’s Global Findex shows that 65% of Chileans have already made a payment online, a much higher percentage than the average for Latin America (46%). 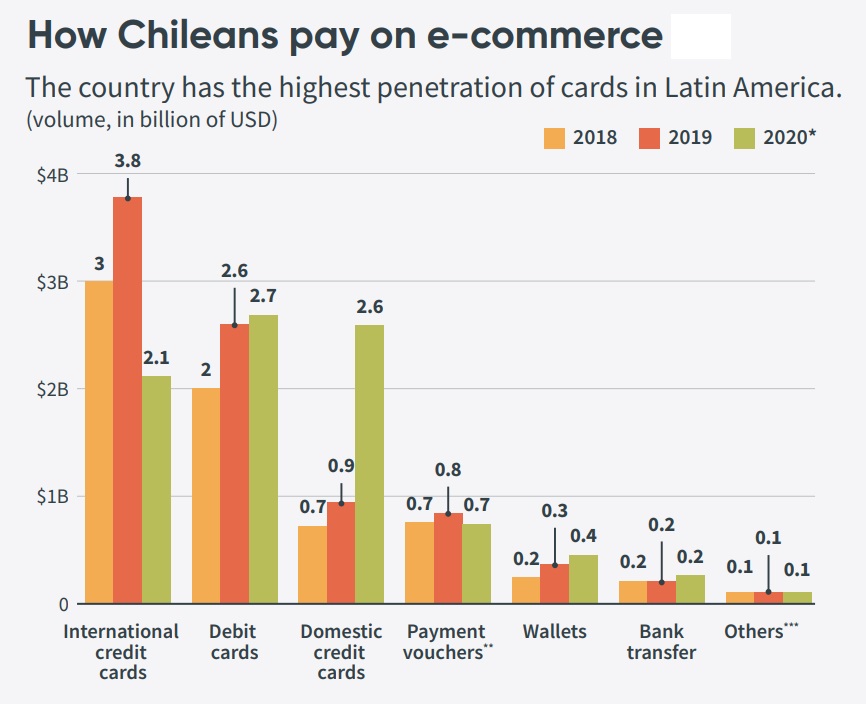