The future of shopping is connected, virtual and augmented

McKinsey has announced the findings of a future of shopping survey conducted with 2,624 consumers in France, Germany, UK and the US. The research entitled, ‘The Future of Shopping: connected, virtual and augmented’, highlights the speed with which cross-channel retail is evolving, and how consumers are eager to try new digital channels that eliminate friction or frustration from their in-store shopping journeys.

60% or more of consumers in Germany, the UK and US say they engage equally with online and offline shopping channels, suggesting that multi-channel is certainly becoming the new norm. Only France, at 35%, was lagging behind the trend, with 44% saying they primarily or only shop in stores. 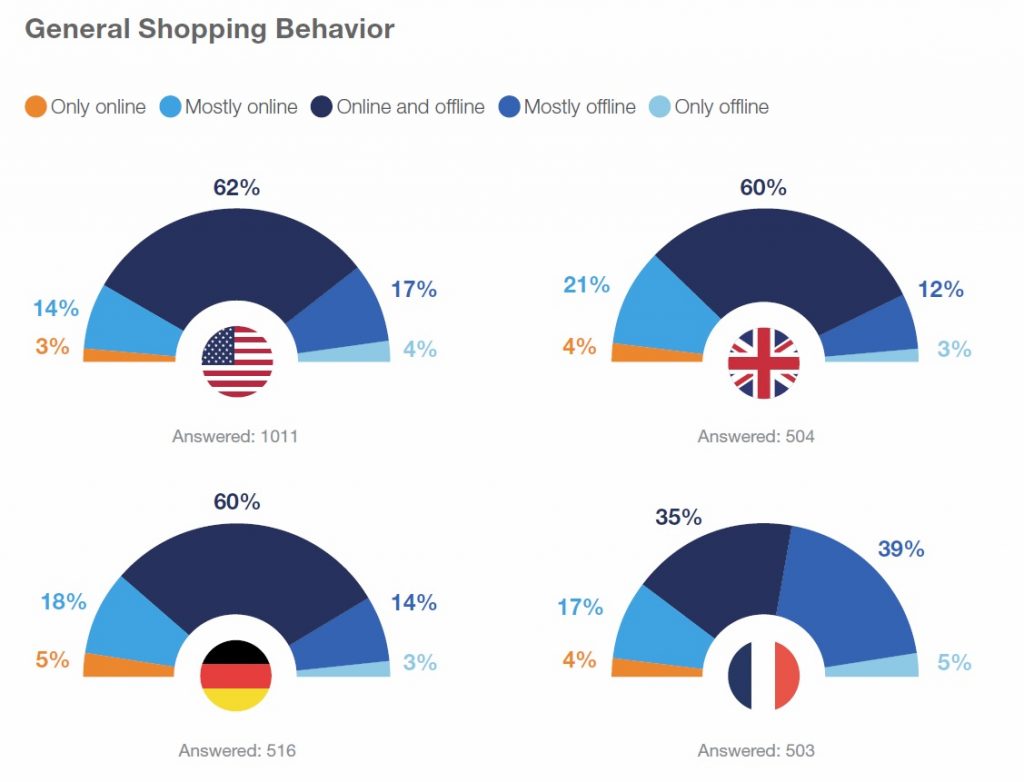 Despite this surge in multi-channel behaviour, the physical store still remains king with 50% of consumers in all countries surveyed saying that the bulk of their shopping activity in the past year was in-store.

Computers are the second most popular method for shoppers in France, Germany, and the UK however, in the US, the immediacy of smartphone shopping (19%) has caught up with the popularity of the computer (19%).

For 18-39 year-olds, despite in-store remaining a powerful channel, it is clear that the smartphone is now their second go-to channel. Interest in voice-activated internet-connected devices appealed to only 4-6% of shoppers in all markets.

The future of shopping is virtual and augmented

New virtual and augmented technologies are enabling customers to interact digitally within the physical store environment to address immediate needs and preferences. They remove friction and allow retailers to reinvent their store experience.

Over 60% of consumers in all countries surveyed had yet to encounter VR or AR applications in-store, yet the majority had future plans to utilise a virtual shelf for a number of activities that they say would improve their in-store shopping experience. 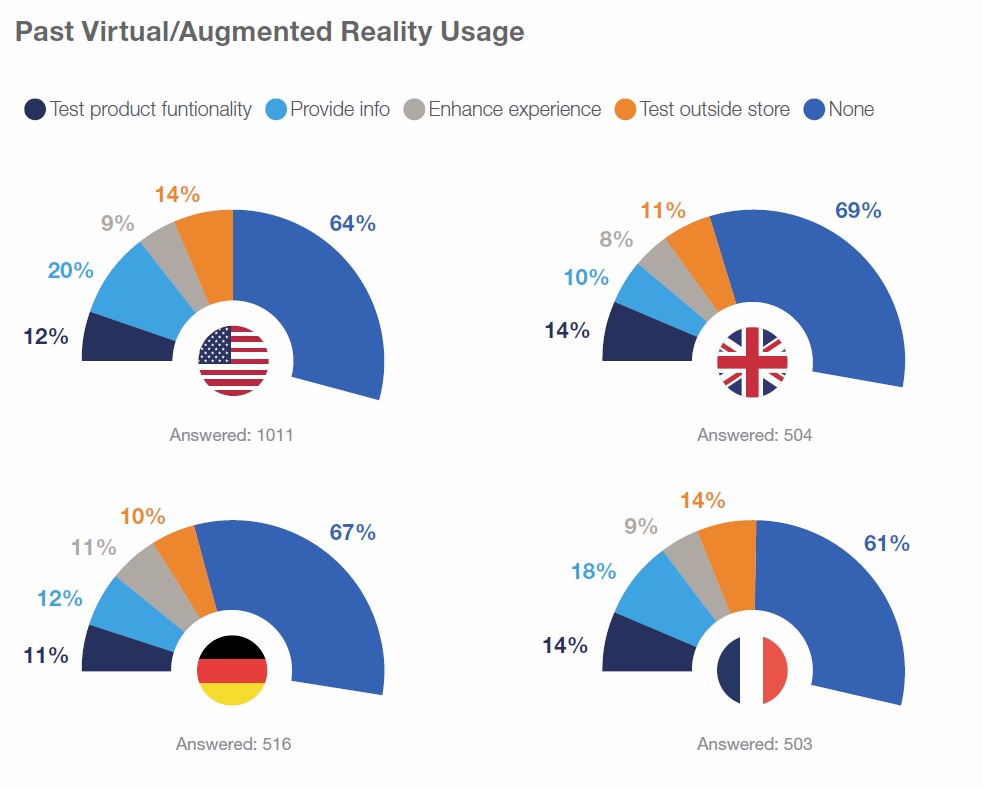 When asked which AR/VR applications they would definitely/probably utilise, those that made it easy to access additional product information or ‘virtually’ explore product functionality/suitability scored most highly with consumers in all markets.

The ability to conveniently tap into more extensive product information on-demand held a particularly strong appeal for all shoppers. This was especially the case in France where 65% said that they would definitely/probably use VR/AR applications that provided more information, followed by the US (62%), the UK (57%) and Germany (54%).

62% of French respondents also said that they would definitely/probably use VR/AR applications to see a product in context– for example, “test outside store”, where a consumer may visualise how a paint colour would look on a wall. This sentiment was also echoed by shoppers in the US (59%) and the UK and Germany (56%).

When it comes to interacting with digital in-store extensions, AR/VR applications that deliver an enhanced experience were the least appealing to consumers in all markets, most notably in Germany where only 41% said that they would definitely/probably use AR/VR applications for this purpose.

Interestingly, the convenience of being able to use a branded virtual shelf outside a store’s location to make purchases held a universally strong appeal for consumers in the US (58%), France (55%), the UK (54%) and Germany (46%).

Today’s time-pressed and smartphone-savvy consumers have a vast array of frictionless payment instruments at their fingertips that enable them to speed through transactions. More and more consumers plan to utilise mobile payment options when shopping in-store in the future. 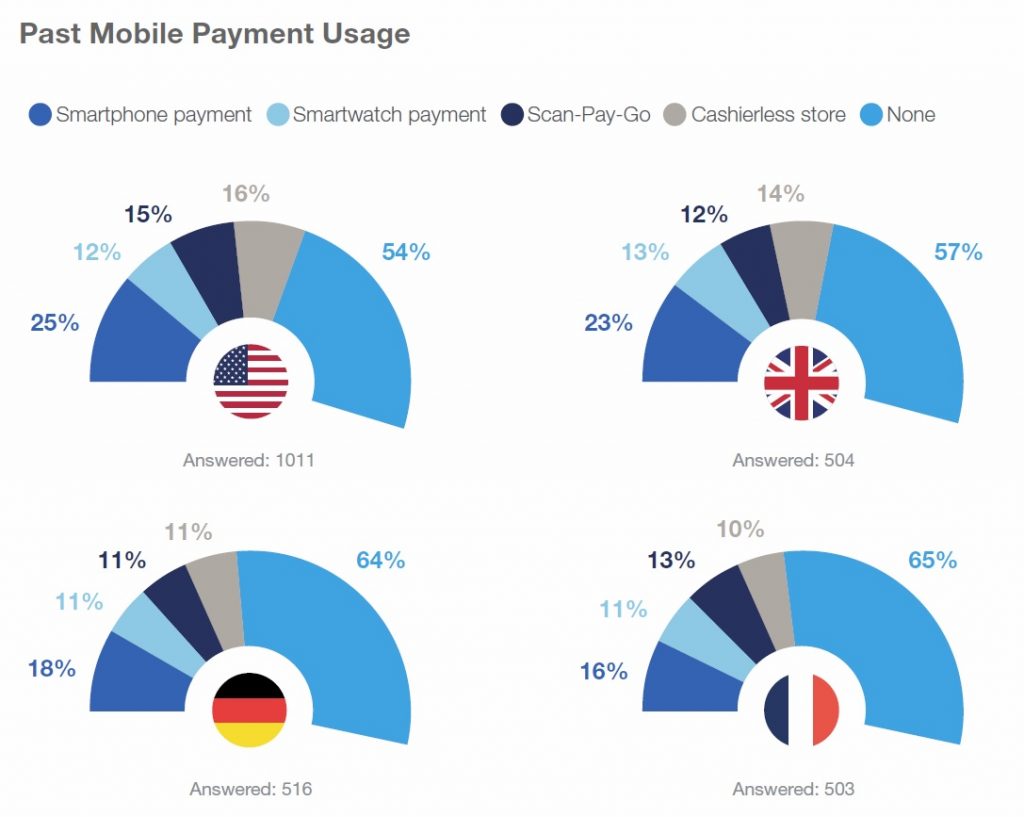 For future use of mobile payments, US consumers lead the way with 65% saying they are definitely/probably likely to opt for making payments at the cashier with their smartphones. They were followed closely by UK (61%), French (53%) and German (52%) shoppers.

Similarly, consumers expressed a particularly strong intent to make more use of their phones to scan-pay-go in the future – thus avoiding the need to go through a cashier point. Once again, US consumers (60%) are most eager to embrace this option, but a significant number of consumers in the UK (55%), Germany (49%) and France (48%) also plan to use this method.

Consumers aren’t prepared to compromise on privacy or security

Eliminating friction in retail through digital innovation is great, but retailers should be mindful that consumers are concerned about how these innovations could impact privacy and security.

For example, having in-store movements tracked was the top security concern for German (43%) and UK (39%) consumers.  Meanwhile, in the US, the top concern was the need to surrender phone and email information (38%).  In France, the biggest concern was putting payment card information online (47%), which came second in Germany (40%) and the US (37%).

The research also highlighted that Generation Z and Millennial shoppers are just as concerned about security and privacy risks, and not as apathetic as they are usually portrayed.

Having their in-store movements tracked proved a top concern for consumers aged 18-39 in Germany (45%) and the UK (35%). However, for 46% of French and 37% of US shoppers in this age group, placing their card information online was their biggest concern.

“Consumers are eager to embrace innovations in retail technologies and demanding more from retailers” said Brian Elliott, Partner and Head of Innovation at Periscope By McKinsey.

“In-store experiences are getting a new lease on life, and for those retailers able to bridge their online and offline channels in a way that consumers can seamlessly interact with will be the winners.

The real challenge for retailers is learning how to personalise the experience for individual consumers by powering cross channel analytics using the data available to them, without neglecting customers’ security and privacy.”

To read more about the survey’s findings CLICK HERE

The post The future of shopping is connected, virtual and augmented appeared first on Payments Cards & Mobile.