The future of digital payments

Advancements in digital technology continued to shape the payments industry in 2015 as mobile, online and other digital forms of digital payments moved into the mainstream.

From mass transit to gas stations and supermarkets, businesses of all sizes now accept various types of digital payment, making paying for goods and services quicker and easier. While this seems very encouraging, what does the landscape look like beyond 2016? – writes Joyrene Thomas

Thinking ahead from the past is always fraught with hazards. When it comes to the future of digital payments, it may be a case of same-same but different. Various technologies, propositions and use cases will continue to co-exist in the digital payments future.

“We believe the pace of change taking place in the payments industry is going to increase as digital technology continues to advance,” says E-bai Koo, senior vice president, global network business, American Express. “While the number of digital payment options is growing, we believe it is too early to determine whether any one platform or form factor will win out. Customers adopt new technologies when they meet their current needs better than how they are being met today.”

For John Berns, managing partner, Accourt, co-author of the Digital Payments Report 2016, various factors are coming together to drive the perfect storm for digital payments.

“Historically innovation has generally been hardware-driven so you have had to wait and catch the innovation wave. For example, no-one upgrades to the latest model of digital television immediately. Consumers only adopt new technology as and when their old device or technology reaches the end of its natural life or breaks down,” says Berns.

“The payments industry has invested heavily in EMV so I think that this will be the consumer interface for some while to come in the physical world — and the survey results particularly around contactless reaching critical mass bear this out. In the digital world, however, it’s a complete revolution.”

“Consumer adoption of new digital payment methods will be far more rapid as you’ve got the perfect storm as technology, regulation and social desire to operate via a single device are coming together.”

Contactless payments are growing strongly and NFC technology will be one of the drivers of digital payments at point of sale (POS). The Smart Payments Association reports that around 40 percent of chip cards shipped in 2014 included contactless functionality. Meanwhile on the acceptance side, 9.5 million NFC-capable terminals were shipped globally in 2014. This represented a 33 percent increase on 2013, bringing the worldwide installed base to 21.4 million units, according to Swedish research firm Berg Insight.

Although consumers can already make higher value contactless payments, typically for payments more than €50, by authenticating themselves with their fingerprint or PIN on their mobile devices, this is currently only available at selected merchants. However, the acceptance infrastructure for mobile contactless is to be extended. By 2017, all contactless terminals already deployed across Europe will be upgraded to allow high-value contactless functionality. And by 2020, all European POS terminals will allow this.

Survey respondents were confident about contactless acceptance reaching critical mass. The majority of respondents believed that this would happen by 2018. 52 percent thought that North America would achieve critical mass by 2018, whereas for Asia and Europe the figures were higher at 59 percent and 75 percent respectively.

On the issuing side, 53 percent of survey respondents thought that critical mass would be achieved in North America by 2018. 62 percent thought that Asia would be ready, whereas 72 percent felt that Europe would be at this level by 2018.

Where are wearables? They are already here, for example American Express and fitness tracker Jawbone announced a partnership in April 2015. This marked the first time consumers could use a wearable fitness tracker with an embedded NFC chip for Amex payments.

As second- and third-generation devices are deployed, the market for wearables and connected commerce generally will continue to grow. According to the International Data Corporation Worldwide Quarterly Wearable Device Tracker, the wearable market worldwide will reach 111 million units in 2016, an increase of 44 percent on 2015 figures. By 2019, total shipments are forecast to reach 214 million units, a five-year compound annual growth rate of 28 percent.

The debate around when wearables will reach critical mass, how much they will displace cash and cannibalise existing card spend almost misses the point. Wearables are not for every consumer or every payment situation. However they broaden the scope of digital payments beyond the plastic card. They are also part of the greater trend of integrating and embedding payment into a broader experience — making them invisible — for greater speed, convenience and ease-of-use.

Digital wallets
With Apple Pay and Samsung Pay live in many markets, digital wallets are firmly back on the payments agenda. That said, there have been various high-profile causalities in the wallet wars, with more expected. Google Wallet has seen poor take-up and numerous iterations since it was first launched in 2011. Visa Europe’s digital wallet V.me by Visa has been withdrawn two years after launch and the investment of around €300 million.

“There are a lot of digital wallets out there — some of the local schemes are looking at this — but we are starting to see some consolidation,” said Berns. “The revised EU Directive on payment services (PSD2) may well lower the entry barriers even further to new entrants in the space, which could interest the internet giants. After all, iTunes is a stored value mechanism, so it’ll be interesting to see how Apple, Google and Amazon compete in the wallet wars.” 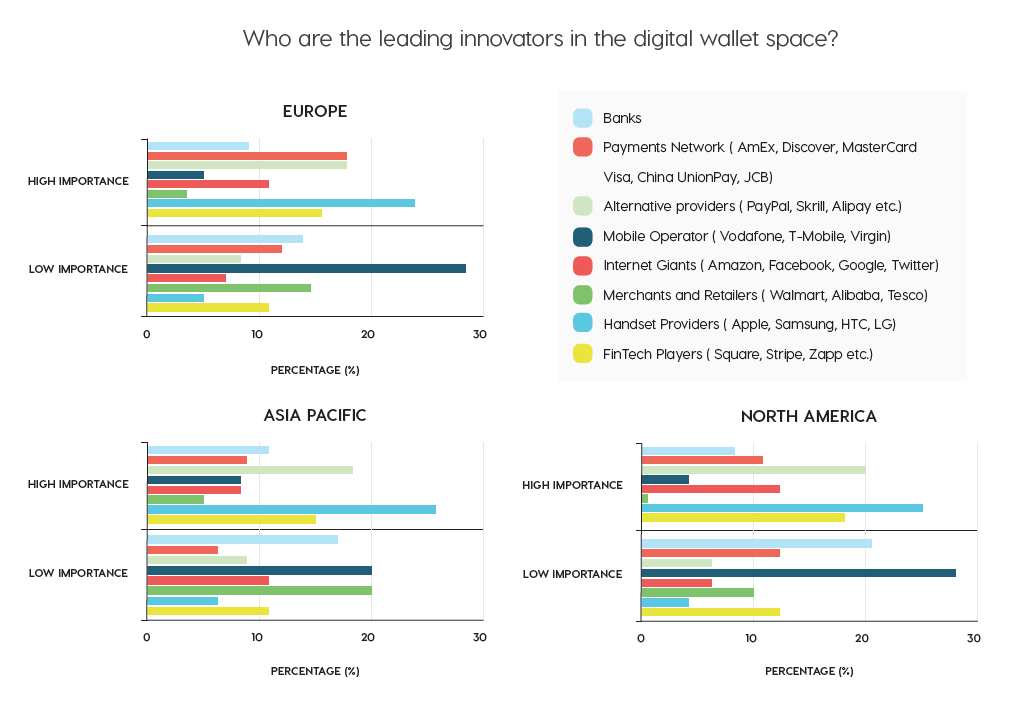 Handset manufacturers and alternative payment providers were judged the most likely innovators in the wallet space across all regions, according to the survey respondents. Mobile operators faired the worst. Yet when it came to trust, payment networks and banks were most trusted to deliver wallets, and merchants and mobile operators the least trusted across all regions.

Unsurprisingly, acceptance and convenience were the factors most likely to drive wallet usage, according to survey respondents. Ubiquitous coverage, or allowing the consumer to use the wallet wherever they want to use it at the very least, preferably via a simple, one-click checkout are the fundaments of a winning proposition.

Technology should be regarded as an enabler to the success of digital wallets, rather than the starting point for a solution. Due to the investment in EMV, the payments industry has favoured NFC for point-of-sale mobile payments, and has perhaps been somewhat standoffish about QR codes. Consumers, however, appreciate the speed and convenience of scanning such codes to make retail or bill payments in-store. Tencent’s WeChat wallet and Alibaba’s Alipay have capitalised on this insight in incorporating choice as well as speed and convenience into their propositions. Their respective wallets have been available to users in China for some time and both companies are looking to expand into other markets and regions.

There is no single use case or one-size-fits-all for digital wallets. As with so much in the payments industry, winning propositions must address both acceptance and usage in a compelling way. They build scale quickly by piggy-backing existing acceptance infrastructure, rather than trying to re-invent it. As few consumers go out of their way to pay in a different way, winning propositions offer incremental value to consumers in addressing an un-met or unacknowledged need or pain point compared with existing alternatives.

When it comes to security and trust in digital payment methods, the present is the baseline for the future. “Security is first and foremost for American Express. When we make new technology available to our customers, we do so in a way that provides the same level of security they are used to receiving from us when using traditional charge and credit cards,” says Koo. 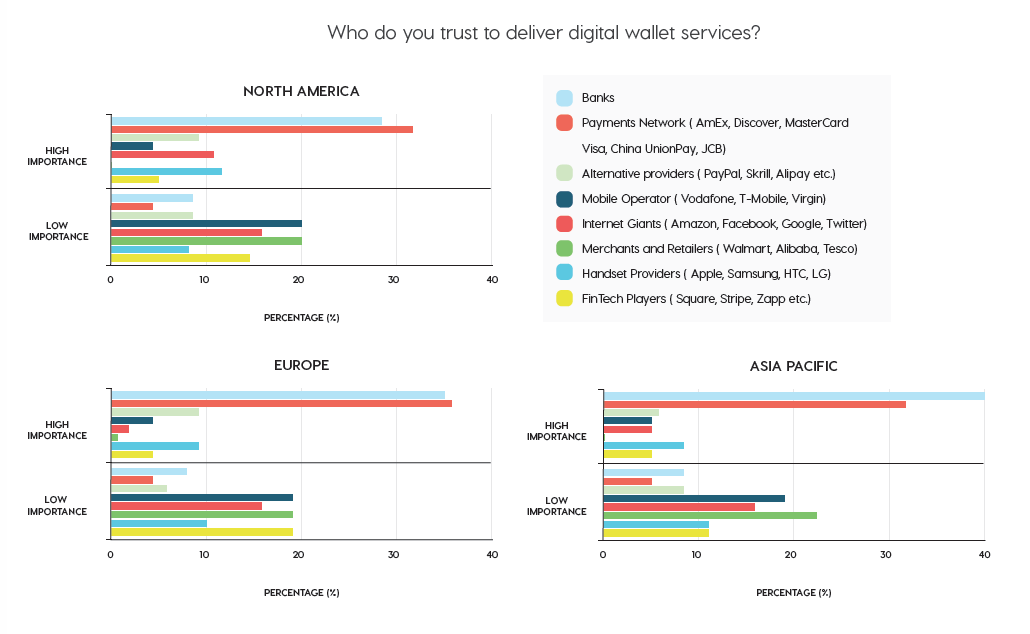 Opportunities and risks exist in the same future. They are inherent to one another. As Koo explains: “While advancements in online and mobile payment options have widened the scope of fraud, they have also created new opportunities to fight fraud.”

Koo cites the American Express Token Service launched in November 2014. With tokenisation, real card account numbers are replaced with tokens, eliminating the need for merchants to store account numbers in the clear, and limiting the potential damage if their systems are compromised. Tokenisation also enables issuers to deploy new digital payment services, such as Apple Pay and Android Pay, in more secure ways.

“Digital technology has also enabled American Express to communicate with and service our card members in more ways. They can sign up to receive alerts about suspicious activity on their accounts through e-mail, SMS and mobile app push notifications,” adds Koo.

The future of digital payments

What does the future of digital payments look like? The future will be more omni-channel, namely using all sales channels interchangeably to serve the customer. More ‘click-and-collect’ and ‘endless aisles’ propositions are expected as merchants consolidate their back-end systems. However, just as service will become more channel agnostic, it will also become more device agnostic as customers expect to transact from any device, any time, anywhere. The future is increasingly digital, which means a greater take-up of digital payment methods.

These methods include automated clearing house (ACH) payments, which are expected to rise in prominence, particularly with the global movement towards immediate or real-time payments. Real-time settlement on the back-end is key to this because it minimises risk for everyone. The merchant receives faster settlement. The consumer sees the transaction immediately and is able to support, approve and challenge it as appropriate.

“Immediate payments is great fit with what is happening in the digital space and the perfect storm I mentioned earlier. So the short answer about the future of digital payments is: there is going to be more of it,” according to Berns.

Succeeding in the digital future

The digital future is about scale, partnerships and speed-to-market. According to Koo at American Express, advancements in digital technology have opened up opportunities for companies of all sizes to get into the payment business, and to grow scale almost overnight.

“We believe that scale wins and partnership is key to achieving success. Given the complexities of the payments industry, companies that can find ways to partner and break into the ecosystem have a much better chance of succeeding.”

“If you look at the amount of funding going into FinTech at the moment and the rate at which technology and innovation are moving, I think that the salvation of traditional players is partnerships and abandoning the build-it-yourself mentality,” says Berns.

The Digital Payments Report 2016 provides views and projections on the state of payments based on research and a survey of industry executives, observers and analysts.

The post The future of digital payments appeared first on Payments Cards & Mobile.