Study: 1 in 10 banks will disappear over the next 5 years

A ten-year study has found that the profit of European retail banks/divisions is at an all-time high, driven by a positive economic environment and lower risks (risk costs relative to total income at lowest level 5% compared to 12% in 2008). 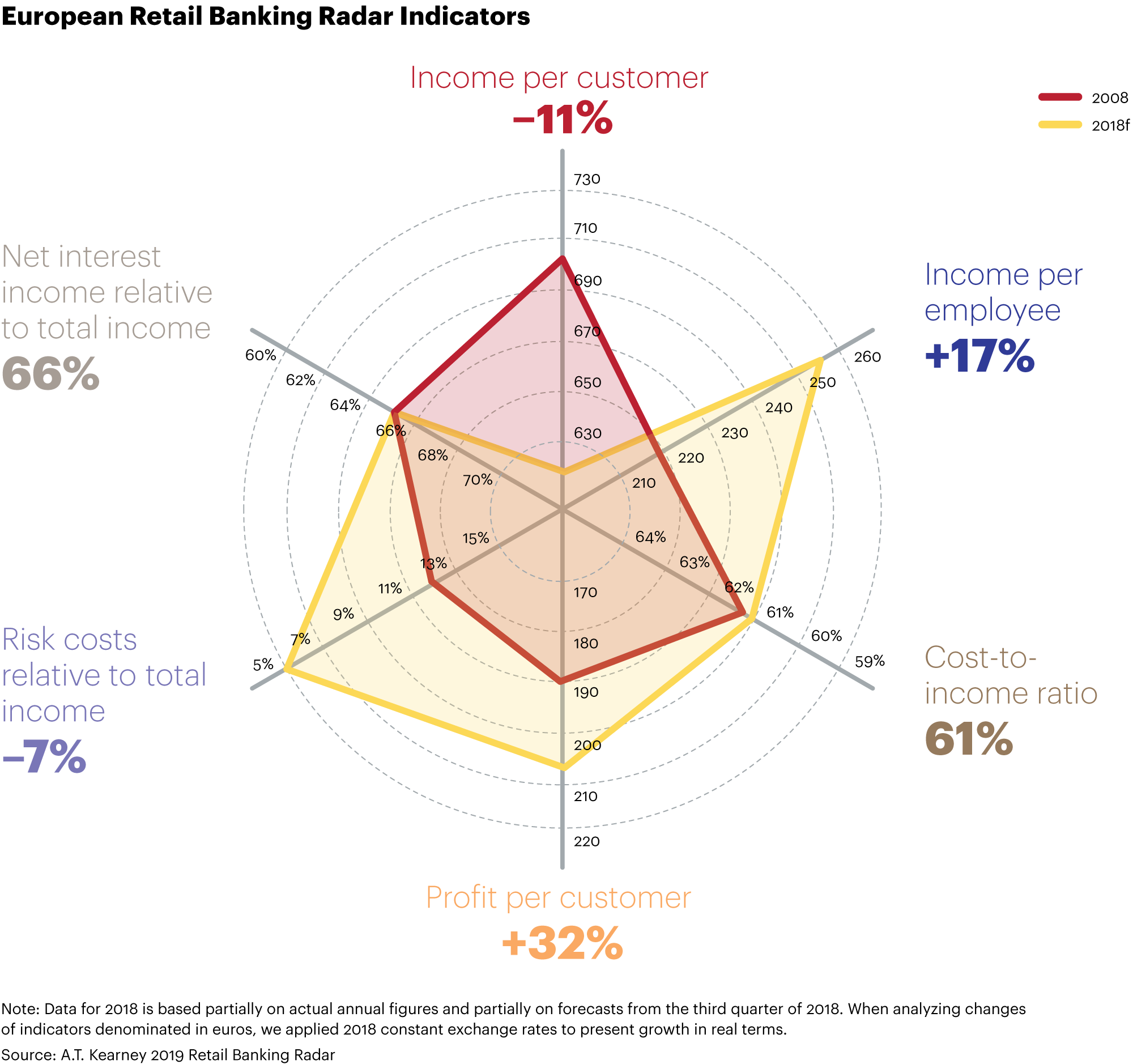 The study shows that the industry faces a critical transformation amidst rising consumer demand for digital banking and the growing possibilities of open banking, revealing four key areas:

“Our ten-year study shows that whilst the industry is stronger, it is stagnating. Not all banks will survive the tide of change as customers increasingly favour digital banks and innovative products and services,” explains Simon Kent, partner and global head of Financial Services at A.T. Kearney.

“Branch closures is a short-term fix to steady the books but it is not enough – traditional institutions need to consider strategic transformation to improve cost and top line and also offer more innovative products and services if they are not only to survive – but thrive – in the new retail banking landscape beyond 2019.”

The rise of “neobanks”

The rise of so-called “neobanks” in Europe offering solely digital products has led to customers increasingly heading to these new models in favour of traditional retail banks. The Radar showed that neobanks’ customer bases across Europe have grown by over 15 million since 2011, compared to a decrease in 2 million customers for retail banks.

Up to 85 million Europeans will be customers of these banking models by 2023 according to the study – which equates to around 20% of the population over 14 years old.

Indeed, some ‘star’ neobanks such as the UK’s Revolut already have upwards of 4 million customers, and with several newcomers already hitting the market in 2019, these banks are catching up with traditional bank offerings.

Others, such as Monzo, are planning expansions into other markets including the United States, showing the popularity of these models on a global scale. Ultimately, this has been one of the driving forces in the closure of bank branches across Europe.

The impact of Open Banking

Perhaps surprisingly, the Radar also showed that up to 50% of European customers are ready to share personal data with their banks. Under initiatives like the Second Payment Services Directive (PSD2), Open Banking has meant more information sharing between banks, third parties, and their customers – and it looks like consumer trust is growing to want this collaboration.

A trend revealed in the study is the transformation of traditional banks into lifestyle platforms, becoming a ‘one stop shop’ for customers’ daily needs – purchasing, travel, entertainment, utilities etc, even integrating social media into these solutions to provide a true lifestyle experience.

“The shift towards digital banking, only compounded by the introduction of Open Banking, has caused a transformation in how and where customers want to bank,” says Daniela Chikova, partner at A.T. Kearney.

“They’re more open to sharing their data with third parties, have greater trust in banks’ ability to hold their data safely and, particularly amongst younger generations, don’t have a need for in-branch banking any more. Open Banking has been a key driver in banking innovation, and we expect this to continue into September as the new Regulatory Technical Standards come in.”

The post Study: 1 in 10 banks will disappear over the next 5 years appeared first on Payments Cards & Mobile.