State of the Industry Report on Mobile Money 2021

2020 was a year like no other. In every region of the world, COVID-19 triggered a mix of responses, from school and workplace closures to restrictions on movement to complete lockdown.

All at once, handling cash, paying for daily essentials and conducting business in person became risky, and more people than ever turned to mobile money as a safer option.

For mobile money providers, the pandemic created a more complex operating environment. With consumer spending down and transaction fees waived, providers found it difficult to reap the commercial benefits of higher mobile money usage and a widespread shift from cash to digital – according to State of the Industry Report on Mobile Money 2021.

However, the industry proved resilient as providers did their utmost to keep economies going and provide an essential service to people in need.

The State of the Industry report looks at what this year of upheaval has meant for mobile money providers, agent networks and the millions of new and existing customers that embraced mobile money in 2020 as a safe and secure financial lifeline.

In 2020, the number of registered accounts grew by 12.7% globally to 1.21 billion accounts – double the forecasted growth rate.

Apart from changes in consumer behaviour, this impressive uptake was due to regulators implementing more flexible Know Your Customer (KYC) processes and relaxing onboarding requirements to make it easier to open an account.

The fastest growth was in regions where governments provided significant pandemic relief to citizens. Account activity grew at an even faster rate. 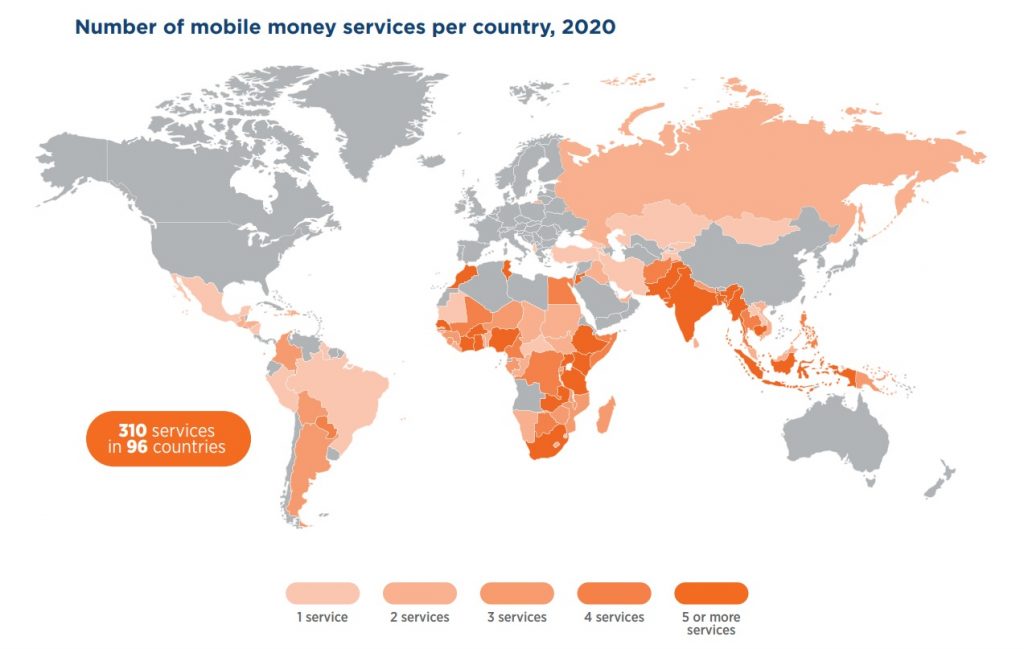 There are now over 300 million monthly active mobile money accounts. Not only are customers using their accounts more frequently, but they are using them for new and more advanced use cases.

This suggests that more and more people are moving away from the margins of financial systems and leading increasingly digital lives.

Transaction values also grew across the board as more money circulated and was cashed-in and cashed-out than ever before. For the first time, the global value of daily transactions exceeded $2 billion dollars, and is expected to surpass $3 billion a day by the end of 2022.

Stronger partnerships are accelerating the shift to digital

To minimise the human and financial toll of the pandemic and keep economies afloat, national governments distributed unprecedented monetary and fiscal support to individuals and businesses.

The value of government-to-person (G2P) payments quadrupled during the pandemic as the mobile money industry worked hand in hand with governments and non-governmental organisations (NGOs) to distribute social and humanitarian payments quickly, securely and efficiently to those in need.

Agent networks are an essential service

Agent networks have always been a core part of the mobile money industry, but during the pandemic they proved critical. As demand rose for non-physical payments, some regulators declared mobile money agents an essential service.

International remittances processed via mobile money increased by 65%in 2020. For the first time, over $1 billion is being sent and received every month.

Despite fears that remittances would decline as people around the world suffered job losses and income cuts, it seems clear that diasporas around the world continued to use mobile money to come to the aid of those back home.

As more consumers became uncomfortable handling cash, many turned to mobile money to purchase food, clothing and other essential products and services. This undoubtedly contributed to an uptick in merchant payments.

The value of mobile money merchant payments grew by 43% compared to 28% in the previous year.

Interoperability is bringing more people into the formal economy

Over the past five years, the value of transactions between mobile money platforms and banks grew fourfold, reaching $68 billion in 2020, up from just $15 billion in 2015.

During this period, the amount of money flowing between the two systems has remained in close balance, highlighting the complementary relationship between banks and mobile money services.

The regulatory landscape is shifting

Regulatory responses to COVID-19 differed significantly between countries. In markets where streamlining and digitising KYC processes had stalled, the pandemic has given fresh urgency to regulatory change.

In many markets, transaction limits were increased to allow more funds to flow through mobile, directly reducing the need for day-to-day cash transactions.

The report will also look at the impact of fee waivers on core revenues, which, if prolonged, could pose a severe threat to the sustainability of the industry.

The post State of the Industry Report on Mobile Money 2021 appeared first on Payments Cards & Mobile.