The enforcement deadline for Strong Customer Authentication (SCA) has passed for most European countries and the latest data from the CMSPI Failure Rate Tracker for August 2021 suggests a European average failure rate of 26%.

Extrapolated over the course of a year and applied to online retail volumes; if these rates were to continue, it would mean over €82 billion of sales at risk due to declines or abandonment for retailers.

Given the existence of such friction at checkout for consumers, it is now more important than ever for merchants to ensure they are actively taking measures to achieve optimal approval rates.

The key reason for this significant disruption to online commerce, according to the CMSPI report, is due to the performance of EMVCo 3D-Secure version 2 (3DS2): an authentication protocol that has been selected to support all online card transactions in Europe (€320.9 billion in 2019).

On a European weighted average basis, the estimates suggest that failure rates have seen improvement since August 2020, with failure rates improving by nine percentage points from 35%. 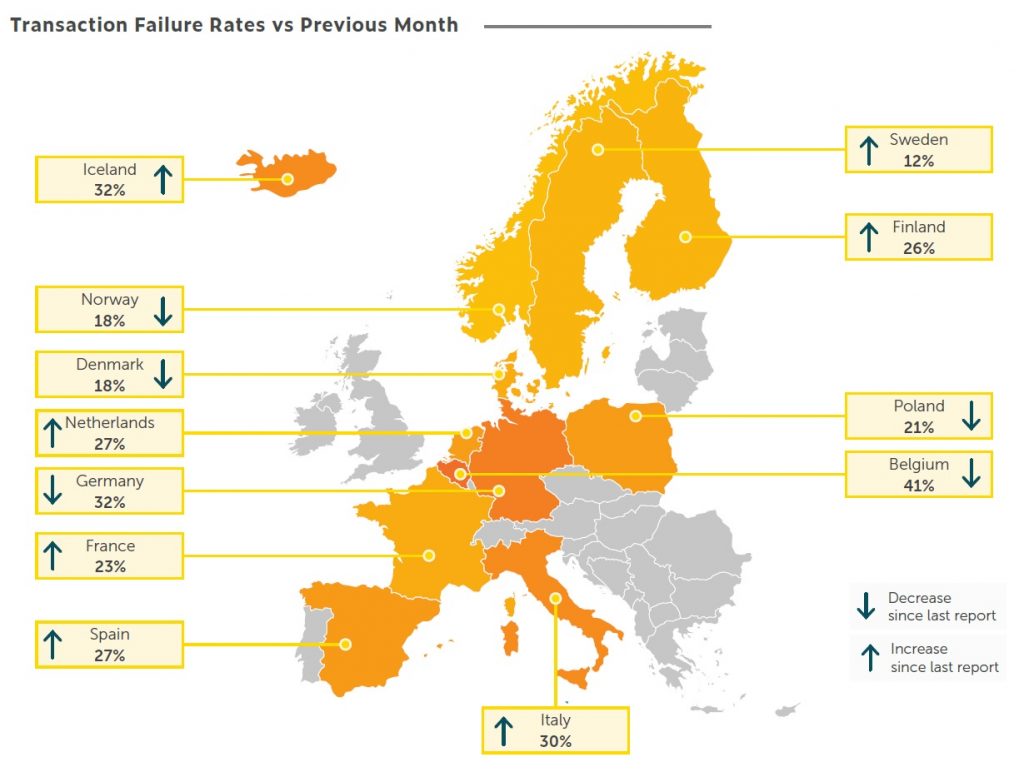 The estimated failure rate in Italy had been trending upwards between August 2020 and January 2021, reaching a peak of 50%. Since then, the rate has shown a downward trend and this appears to have continued into July 2021.

The estimated rate did, however, increase last month. Between August 2020 and January 2021, the estimated failure rate in Belgium was trending downwards while the opposite was true for Germany.

E-commerce retailers invest significant amounts of money to get customers onto their website or app, to optimise the look and feel of the website, and to get the customer to press the pay button, or “convert”.

However, after the customer presses pay, the retailer has little control over whether the payment is accepted, or not.

On average, just 3.3% of retail customers who enter a website click pay and once you factor everything that happens “post-pay button”, this reduces to 1.96%.

Of the transactions that fail following a payment request, CMSPI figures show that 20% are “false declines”. These are good customers, with sufficient means to pay, who are prevented from doing so.

Furthermore, these false declines cause over €20 billion of lost retail sales each year in Europe alone. This is before any impact of added friction as a result of SCA.

Failure rates are typically higher in an ecommerce environment as compared to the ‘brick and mortar’ environment due to the complexity of payment flows and the greater likelihood of fraud online.

However, SCA has led to increased failure rates online as the two factor authentication requirement naturally adds more friction for consumers which can lead to transaction abandonment.

Furthermore, the industry has faced a number of challenges in implementing SCA tools leading to timing and latency issues as well as an overly cautious attitude to maximising the usage of SCA exemptions.

Therefore, it is now more important than ever for merchants to do all they can to reduce false declines and optimise their e-commerce arrangements to offset some of the impacts felt as a result of SCA.