According to Bloomberg, Samsung delayed the start of its mobile payment service until September, further hindering its ability to gain ground against competing services from Apple and Google. 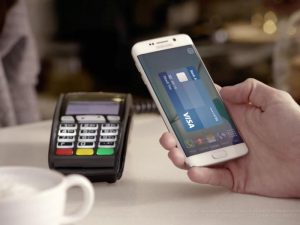 next high-end mobile device, Executive Vice President Rhee In Jong said during an investor call Wednesday. The company previously said the service would start as soon as July.

Google, Apple and PayPal are among the companies seeking to capture a piece of the mobile-payment market as customers seek to use their smartphones to buy coffee, clothing and food at stores and restaurants. The market will top $142 billion by 2019, compared with $67 billion this year, according to Forrester Research.

“The new service will likely be deployed on its next Galaxy Note device,” said Claire Kim, a Seoul-based analyst at Daishin Securities Co. “The key is how fast Samsung will be able to expand the service to lower-end devices.”

Samsung plans to expand to other markets, including Europe, China, Australia and South America, beginning later this year, Rhee said. It will be made available on devices other than the high-end Galaxy S6 and S6 Edge, he said Wednesday.

Samsung announced its new payment service in March while unveiling the new smartphones. Samsung partnered with MasterCard Inc. and Visa Inc. on the new service, which will be compatible with 90 percent of magnetic-strip card readers, the company said at the time.

Samsung initially wants to have between 15 percent and 20 percent of its smartphone owners use the payment service, Rhee said Wednesday.

Samsung bought LoopPay Inc. in February to help it develop technology for mobile payments. LoopPay makes it easier for retailers to accept payments via smartphones.

The announcement of Samsung’s delay comes days after Google announced a new feature for Android Pay that turns any smartphone application into a wallet that can be used in physical and online stores. Shoppers can use that service in about 700,000 U.S. locations, Google said at a May 28 developer conference.

Samsung also is trying to reverse declining market share in smartphone sales to Apple, which debuted Apple Pay last year. That payment service is backed by more than 2,500 banks and credit unions.