Royal Bank of Canada, which over a year ago built its own mobile wallet technology (with partners) that it’s adapted to work with Apple Pay, Android alternatives and the card networks’ host card emulation. It has a patent pending on its RBC Secure Cloud technology. 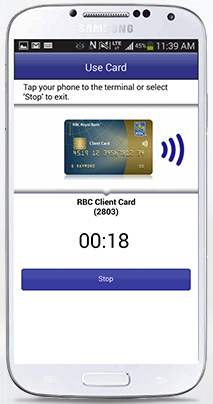 harder to do so – reports American Banker.

“We think we can add more to that experience than anyone else can,” said Jeremy Bornstein, head of payments innovation at the Montreal-based company. “Top-of-wallet is our primal strategy. That is why we’re doing this.”

RBC is the largest card issuer in Canada, with 6.5 million cards. It sold its US retail banking a few years ago to PNC but is in the process of buying City National in Los Angeles.

Some large e-commerce players have tried to steer clients to one payment method or another, Bornstein observed, and he could even envision bidding wars — I’ll pay you more if you tell your client to use my card over theirs.

“That might never happen, but we want to make sure clients choose us, and for the right reasons,” he said.

To pay for a vacation, for instance, Bornstein says RBC’s Avion card makes sense because it provides insurance and reward points. For everyday expenses, a different card might be more logical.

The basic architecture for mobile payments, in Bornstein’s view, includes Bluetooth for a wearable or a phone to communicate with a payment terminal. It includes a secure environment that may or may not include a secure element (a chip on a phone that can store sensitive information). And it includes near-field communication.

“In 2015, I think we’re well past the debate that NFC is the standard for payment at the point of sale,” Bornstein said. “We’re fully supportive of NFC now after five or six years of questioning. That is the technology that will win to get that payment off of anything to a merchant and through the network for authorization and settlement.”

It works with a combination of the SIM card in a smart phone and payment data stored in a private cloud.

“We created cloud based payments before there was a name for it,” Bornstein said.

The app is indifferent whether a payment runs on the Visa, MasterCard, and debit networks.

“It doesn’t matter what you want to pay with, it’s essentially a decoder and a transmitter,” Bornstein said. “All the data is kept in the RBC data center, behind our firewalls.”

When a customer taps “pay” on the phone, RBC’s app sends a payment request through the SIM card, where it’s decoded, and the NFC antenna.

The solution has been running since January 2014 on two of Canada’s six major telco networks, Bell Mobility and Virgin Mobile.

In December of 2014, the bank announced its transition to host card emulation, a software architecture that provides virtual representation of electronic identity cards. HCE gets around the problem of handset manufacturers, beholden to large telcos, not allowing access to the secure elements in their phones. RBC is currently testing HCE in an employee trial and will sunset the SIM/cloud hybrid model.

In the RBC Secure Cloud, the bank handles 99% of transactions and provisioning attempts in under two minutes. “To be able to transmit data through all of those different handoffs in that timeline is pretty amazing,” Bornstein said.

Usage among Canadians has been growing 20% a month.

In the near future, the bank plans to roll out several enhancements to its mobile wallet. One is the addition of a gift card wallet that will let people buy, trade, and exchange such cards. A loyalty wallet will let customers add and use loyalty cards.

It’s also working with partners to create wearable devices for the mobile wallet. In 2014, RBC executives visited some Silicon Valley software companies to see if they could build the mobile payment technology they had in mind.

“A bunch of bankers in suits talking to guys in shorts and sandals to talk about generating a chip set for us,” he said. “We got some strange looks, as you can imagine, from the chip designers.”

With partners, the bank built RBC PayTag and PayBand, “a wrist band that was not a very attractive device but very functional,” he said. The devices work with RBC’s mobile banking app and interact with Visa and MasterCard.

“We didn’t build it because we thought we were really good at designing. We wanted to prove that this made sense,” Bornstein said. “We’re very satisfied that this is the future.”