Retailers look to launch voice commerce but is the market ready?

Argos has become the first retailer in the UK to offer a voice commerce and search shopping services via the Google Assistant platform. 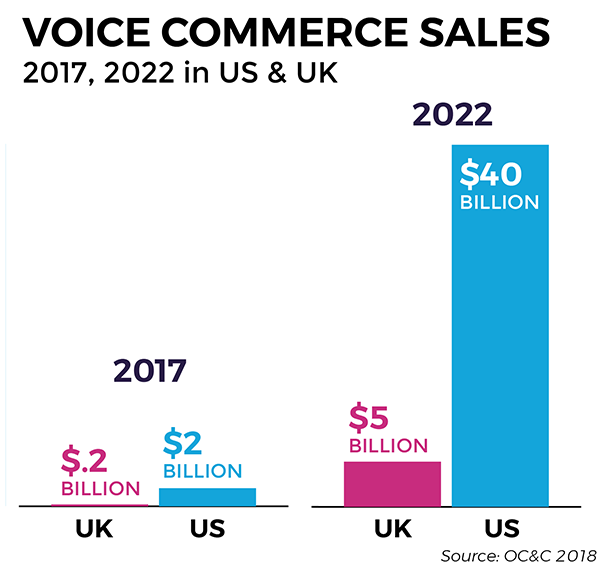 Retailers look to launch voice commerce but is the market ready?

While the success is yet to be seen, this should serve as a call to action for retailers that long term market success involves innovation and keeping up with the latest technology and consumer trends.

The move comes on the back of increased competition from Amazon, which produces voice-controlled Echo speakers. Even though Amazon and Google have sold millions of smart speakers, analysts say few people use them to buy products.

“Argos’ move into voice search is the start of a new era in retail, where voice activated devices are transforming the process of online purchase into a more seamless and accessible customer experience.” commented according to Andy Burton, CEO of Tryzens.

“Argos is the first of what we anticipate will be a long line of retailers investing in voice commerce. This new channel is arguably somewhat overdue for attention. With smart speaker sales reaching 3.94 million in the UK last year, there is a clear opportunity for retailers to reach consumers through a growing channel that promises to offer a new level of simplicity and convenience. Advancements in simplified payments enable consumers to research, reserve and purchase in a matter of seconds, transforming the way customers shop.”

According to a report published by The Information based on information it obtained from “two people briefed on the company’s internal figures”, only 2% of the people who own Amazon Alexa-powered devices have taken advantage of their ability to make voice-based purchases.

There are estimated to be some 50 million Alexa devices in the wild, meaning that 1 millon of them have been used to make a voice-based purchase. That might not seem like a horrible start, but a number of analysts have touted voice commerce as one of the next big things.

As BGR’s Andy Meek noted, OC&C Strategy Consultants had predicted that voice commerce will generate a whopping $40 billion in sales by 2022. If The Information’s sources are accurate, such a prediction looks tenuous at best.

What’s more, The Information’s sources claim 90% of the people who used their Alexa-powered device to make a voice-based purchase failed to make a second voice-based purchase. If that is true, it raises even bigger questions about the future of voice commerce, especially since shopping is one of the features Amazon highlights when promoting its Echo devices.

While voice commerce looks promising on paper, numerous observers have pointed out that the experience falls short in common real-world scenarios. For instance, obtaining information about and pricing for products using voice commands is probably far less efficient and desirable than using, say, a mobile app.

Even for common items that are purchased on a regular basis – “Alexa, buy paper towels” – many customers might want to double-check prices before committing to a purchase, especially if they’re not brand-loyal.

Another observer, an Amazon seller, pointed out that the Alexa keywords for his products frequently get changed, making it more difficult for customers to place orders by voice.

Issues like this might very well explain why owners of voice-based intelligent assistant devices apparently aren’t being used for shopping. In theory, Amazon and other retailers selling through voice-based devices could address some of these issues, and likely will. But as digital commerce evolves, it’s still not clear just how important voice commerce will actually be.

The post Retailers look to launch voice commerce but is the market ready? appeared first on Payments Cards & Mobile.