The Latin American e-commerce market in the countries selected for detailed study is worth $50 billion and is growing at a rate of 23% a year. Today, 34% of online purchases are made using a mobile device and the average annual spend per online shopper is $471.

The most popular purchase categories in Latin American e-commerce vary from country to country. In Argentina, Chile, Colombia and Peru travel is the number one category. In Uruguay it’s clothing, and Brazil electrical goods – according to the PPRO Payments and E-commerce Report.

The region’s biggest e-commerce player is the Argentine MercadoLibre. The company operates online marketplaces in 18 countries, from Mexico to Argentina, has net revenues of over $1.4 billion, 3.5 million sellers and over 34 million unique buyers.

The most common means of paying for an online purchase in Latin American e-commerce is by credit card, used in 58% of all online transactions. Cash has 17% of the online payment market, bank transfer 13%, e-wallets 10%, and other minor payment methods the remaining 2%. Visa is the biggest player in the card market, with a 42% market share, followed by Mastercard (38%), local and other schemes with 18% and American Express with 1%. 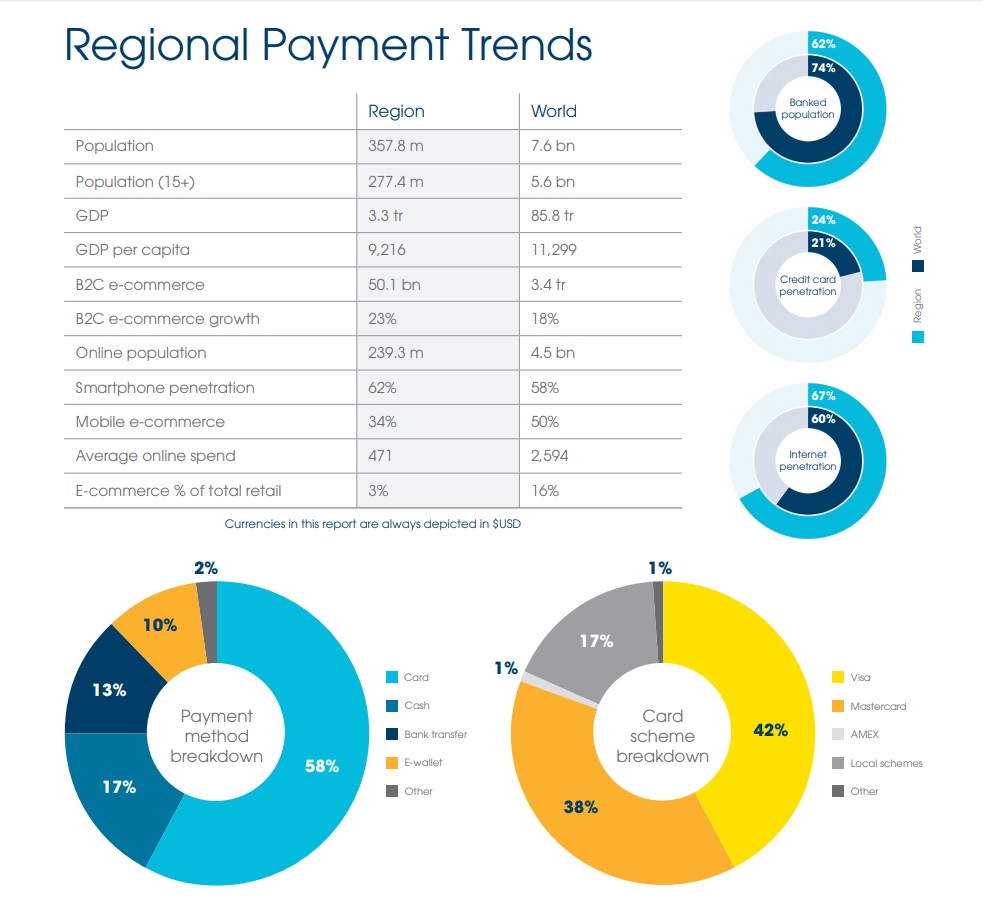 Central and South America is highly diverse, economically and culturally. To get a feel for the region’s changing e-commerce landscape, a new report has looked at trends affecting the whole region and at some of its leading markets in greater detail.

These markets were Argentina, Brazil, Chile, Colombia, Peru and Uruguay. The Argentine economy hit a turning point in 2019, with the election of Alberto Fernández to the presidency. Fernández has promised to renegotiate the terms of the $56 billion IMF loan the country received in 2018 and to put a halt to the pro-market austerity measures of the previous administration.

The big question for 2020 is whether the country can renegotiate and service its significant sovereign debt to the IMF.

In Brazil, the economy grew at a rate of 1.1%3. The country’s central bank forecasted a full-year economic growth rate of just 0.9% for 2019. National debt is now 80% of GDP and without significant reform is expected to rise to over 100% by as soon as 2023.

There are positive signs, with pension reforms passing the Brazilian senate in October 2019. The country’s long-term economic health depends upon the government’s ability to build on this success and pass measures liberalising trade and reducing tariffs.

Between October 2019 and the end of the year, Chile suffered a wave of riots and protests against the Pinera administration’s liberalising agenda. In response, the government has lurched to the left, promising higher spending, firing eight ministers and increasing government spending by at least $1.5 billion a year.

In September 2019, consumer confidence was at -10 points, indicating a mildly pessimistic outlook. Nevertheless, this is an improvement of almost 12 points since June 2019. One factor which has helped Colombia considerably, is the US sanctions on Venezuela. No longer able to buy from the country’s socialist neighbour, US importers have increased their orders from Colombia.

Oil exports to the US rose by nearly 25% in Q1 of 2019. The flipside to this is that Colombia currently hosts 1.4 million Venezuelan refugees, which puts a strain on resources and infrastructure.

Early in November 2019, Peru announced that it would be cutting its 2019 growth forecast from 2.7% by the end of December. At the start of 2019, the country’s central bank was forecasting 4% growth — so this is quite a come down. Copper accounts for over 50% of Chile’s exports. Demand for copper, and therefore the price of copper fell in 2019 as a result of the slowdown in global trade arising mainly from the US-China dispute.

In 2018 the Uruguayan economy grew by just 1.6%, down from 2.6% in the previous year. The economies covered by this report are highly dependent on commodity markets — most, with the exception of Colombia, export heavily to China — for oil, copper and other raw materials.

For as long as the international trade slowdown persists, this puts them at a heightened risk of recession. This risk may be heightened by American policies toward the region. Early in December 2019, US President Trump threatened to impose tariffs on steel and aluminium from Brazil and Argentina, in response to what he said was currency manipulation by the two countries. If this is a sign of things to come in 2020, then South and Central America could be in for a rocky ride.