Mobile continues to dominate as consumers spent a record 3.8 trillion hours on mobile in 2021, according to the State of Mobile 2022 report by App Annie.

The company revealed several trends on how the world continues to move toward mobile in its State of Mobile 2022 report.

2021 was record breaking as consumers continue to embrace a mobile lifestyle. In the top 10 mobile markets, a staggering 4.8 hours a day were spent on mobile. Consumers spent $170 billion on apps, which is up 19% from last year. Downloads continue growing at 5% year over year to reach 230 billion.

The US has seen phenomenal growth in consumer spend, adding an additional $43 billion in 2021, $10.4 billion more than 2020, equating to 30% growth YoY as mobile gaming and in-app subscriptions went mainstream. 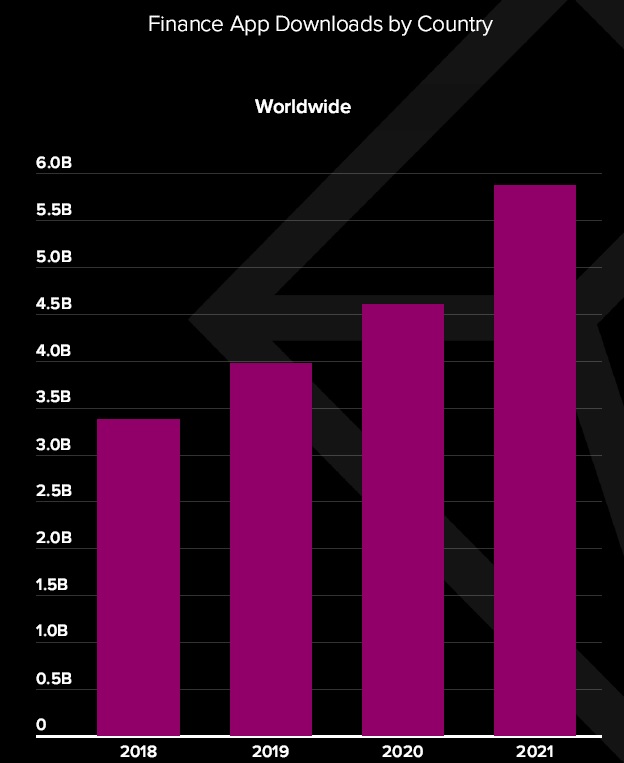 Consumers are more willing to try alternatives to retail banks, such as neobanks, which tend to be more accessible to those without excellent credit and offer custom features better suited for specific needs.

Although retail banks are widely used by Gen X and Baby Boomers, Gen Z are most likely to use trading apps and neobanks across regions.

In addition, they also prefer to use money transfer apps such as Venmo, Cash App, and Splitwise as they are increasingly comfortable using their mobile phones as a form of payment instead of cash.

Finance app publishers who wish to reach the next generation of mobile-savvy users should keep in mind what they now come to expect: fast and simple money movement and financial flexibility that tailors to their needs.

Most countries tend to use homegrown neobanks; Mexico is an exception, where Brazil’s Nubank topped the charts across both countries.

In fact, Brazil is a hotspot for neobank adoption as it has a large population that currently does not have relationships with retail banks; Nubank and PicPay had the second and third highest average MAU worldwide in 2021, while its C6 Bank and Banco PAN saw >200% growth in MAU YoY.

In contrast, Australia’s user base, for example, rely less on neobanks due to the popularity of the advanced money movement capabilities within the region’s existing retail banks.

Among the countries with the fastest growth were Indonesia, Singapore and Brazil at 52%, 46% and 45% growth YoY, respectively.

in Some Regions APAC-HQ’d shopping apps have grown international downloads, shifting market share to non-native-based brands in many regions.

Across AMER, overseas publishers grew in share of downloads. In the US, however, the mobile shopping market continued to be dominated by US-based brands (66% share), with only 34% from non-domestic brands.

Still, US-based apps lost 5% share of downloads to overseas publishers, driven by China, Canada, Australia, and Japan. In Brazil, Overseas-HQ’d apps dominated 52% of all shopping app downloads in 2021, an increase in share of 11% YoY.