Report: Latin America is still the next big thing when it comes to e-commerce

Latin America is still the next big thing when it comes to e-commerce – COVID-19 has just emphasized this.

In the report, A study on the state of cross-border e-commerce in Latin America, AMI estimates that, in 2020, the e-commerce market in Latin America grew almost 8.5% over 2019, which is a number surprisingly low when compared to the double-digit growth registered in the past years. In 2019, e-commerce grew 20% over the previous year, reaching $177.56 billion in TPV. The region, however, is expected to gain a new pace in 2021.

The reason for this comes from an undergoing change in the distribution of e-commerce expenditure caused by the COVID-19 crisis, not just in the region, but worldwide.

The travel vertical was the most hit by the crisis due to the isolation measures caused by the pandemic, pushing down e-commerce sales as a whole. Retail and digital goods were also affected but reacted faster.


If we consider the forecasts for economic growth in Latin America and other regions, however, we can infer that the region could become “the” fastest-growing region for e-commerce, alongside SE Asia.

As a result, we expect Latin America to match SE Asia in e-commerce growth, whereas in the past it was trailing just behind,” evaluates Lindsay Lehr, associate managing director at AMI. 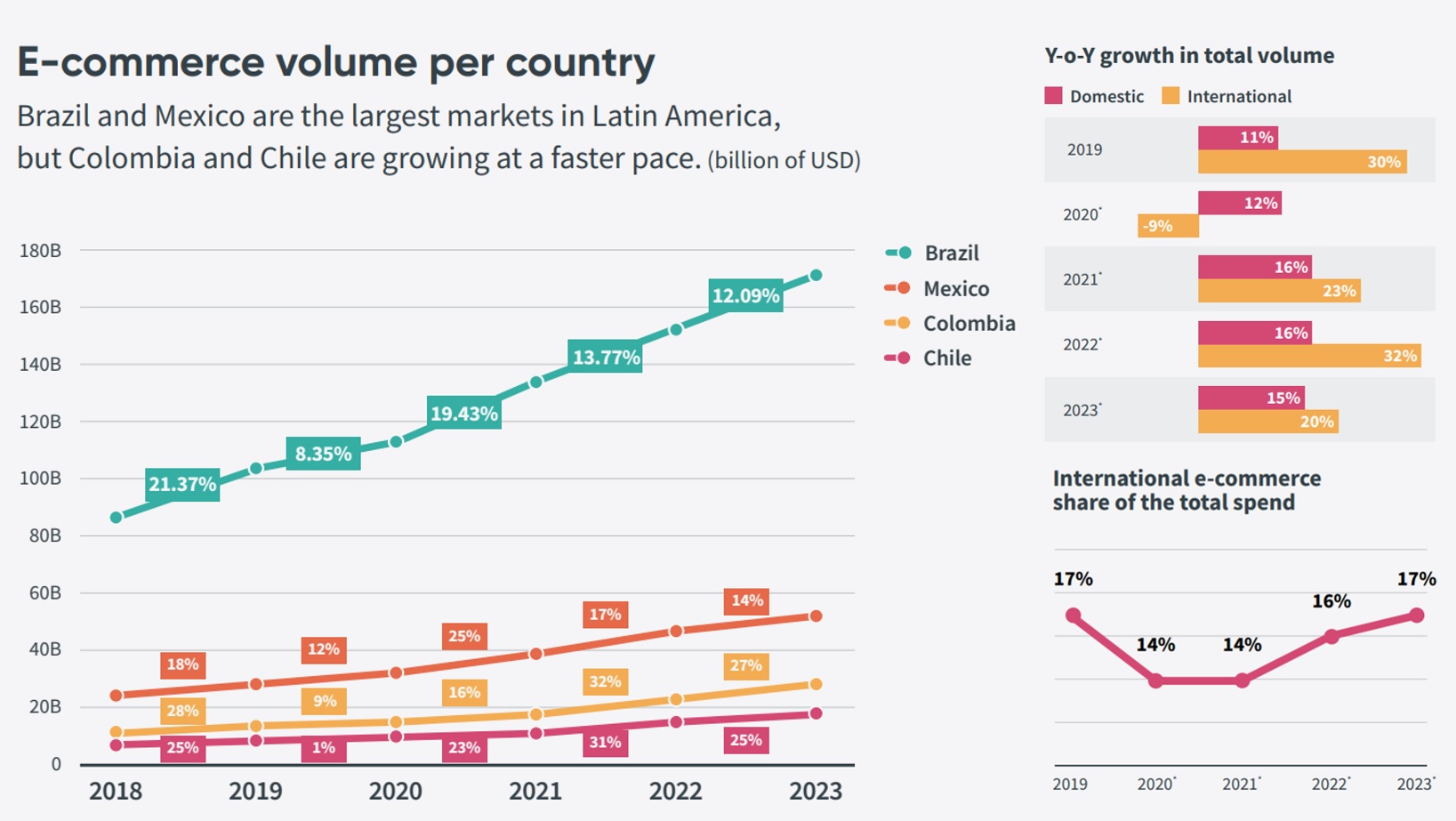 Ricardo Sfeir, a digital commerce expert at Euromonitor, emphasizes that the region held the second highest growth in digital commerce in the last five years, from 2014 to 2019, and it will probably be the one leading the sector’s growth in the coming years (2020-2024).

Latin America’s first and biggest economy, Brazil remains the regional giant, representing 58% of total e-commerce spend in 2019, according to AMI. By 2023, the market intelligence firm forecasts that the region will surpass $300 billion in e-commerce volume.

The Brazilian E-commerce Association (ABComm) estimates an 18% growth for e-commerce in 2020, reaching BRL 106 billion in revenue – but as the sector gains ground with newcomers pushed by the pandemic, this forecast is likely to be surpassed, according to the organization.

AMI, in its turn, forecasts a 10% growth for the country’s domestic e-commerce market, and a -11% drop for the cross-border market. This negative growth on crossborder e-commerce reflects a scenario where international purchases decreased during this year, ending up with only 7% of 2020’s total share of the e-commerce market.

In 2020, as travel was the most impacted sector, digital goods is likely to take the lead as the main vertical in terms of expenditure, with a projected $50 billion spend, out of $112.4 in total volume.

The second-largest market in the region, Mexico has been showing a digital goods growth of 37% during 2020 and an e-commerce penetration that grows faster than in Brazil.

But according to AMI, Mexico has been particularly lagged in the adoption of digital technologies.

“You have the upper-middle class who looks and feels like folks who live in first world countries, fast technology adopters very comfortable with e-commerce. Then you have a large segment of the population that still operates very much in cash, in the informal economy, and is much slower to adopt digital payments and digital goods,” stresses Lehr.

According to her, the landscape is changing, fueled by the pandemic. The acceleration towards digitization is particularly strong in Mexico, a country with an underserved population when it comes to payments and digital adoption.

With a fast-growing pace of digital goods (63%), Colombia has in a local player one of the major drivers for its digitization.

According to AMI, Rappi, the popular Colombian super app, has been boosting the digital category in the country, and beyond that: preparing Colombians to adopt digital goods and services, as well as e-commerce, in all areas of their daily lives.

“Similar to Mexico, Colombia has two worlds: urbanized people who are very used to technology and are already avid adopters of digital goods, and outside the major cities, people who are coming to e-commerce for the first time,” points out Lehr.

E-commerce penetration in the country is likely to reach 55% in 2020. For Euromonitor, although Colombia is the most delayed country among the largest economies in the region when it comes to development of digital commerce and connectivity rates, the country has the highest growth rates in digital commerce and its rapid and steady increase in the penetration of mobile devices is having an effect on the development of the local ecosystem.

“The country, for instance, ends up having higher rates of digital payments under total digital trade than Mexico,” points out Sfeir.

With the most banked population among all the other Latin American countries, almost everyone in Chile has access to a debit card and a bank account.

On the other hand, due to the closed payments acquiring landscape, there are lower levels of new technology moving into the country.

“On the e-commerce side, we have really sophisticated and advanced online retailers and players in the travel industry, but less movement in digital goods because of this less flexible payments infrastructure, that has held back the fintech revolution a little bit,” points out Lehr.

Even so, the country has experienced a surge in digital goods during the pandemic and is likely to see this segment reach a share of 26% of all e-commerce volume.

According to Euromonitor, Chile leads the internet penetration rate in the region, with 86.1% of consumers online in 2019. On the other hand, it is the only country that has the highest percentage of use of desktop as an online shopping device: a cultural trait.

Chile is also the only country in the region, along with Brazil, to have bill payments as the main industry within digital commerce, with good levels of internet banking nationally.

The post Report: Latin America is still the next big thing when it comes to e-commerce appeared first on Payments Cards & Mobile.