As innovations around the world erode barriers to digital commerce, consumer habits around mobile payments are changing across countries.

Over the past decade, there has been a wave of innovations across the globe that help consumers gain on-the-go access to the internet via mobile devices. There are also ongoing efforts to remove digital commerce barriers according to the Global Mobile Payments Outlook.

As progress is made, we are starting to see how these barriers to mobile commerce (m-commerce) monetization have started to erode, resulting in an increasing mobile share of digital commerce.

Given the growing importance and growing ubiquity of m-commerce, Comscore set out to build upon its existing e-commerce measurement capabilities and add reporting for mobile online transactions and in-store mobile contactless payments.

Worldwide digital audiences continue to shift toward engaging more with mobile and multi-platform devices, and less with only a laptop or desktop (Figure 1). While audiences in North America and Europe still rely comparatively more on desktop and laptop devices to connect to the internet, audiences in Latin America and Asia Pacific show a stronger dependency on mobile devices.

In many developing economies, desktop and laptop devices can be inconvenient and costly to own, so many consumers, enabled by a combination of cheaper devices and mobile carrier financing options, have migrated to mobile directly. In many countries, these devices have become a necessity and a means of gainful employment. 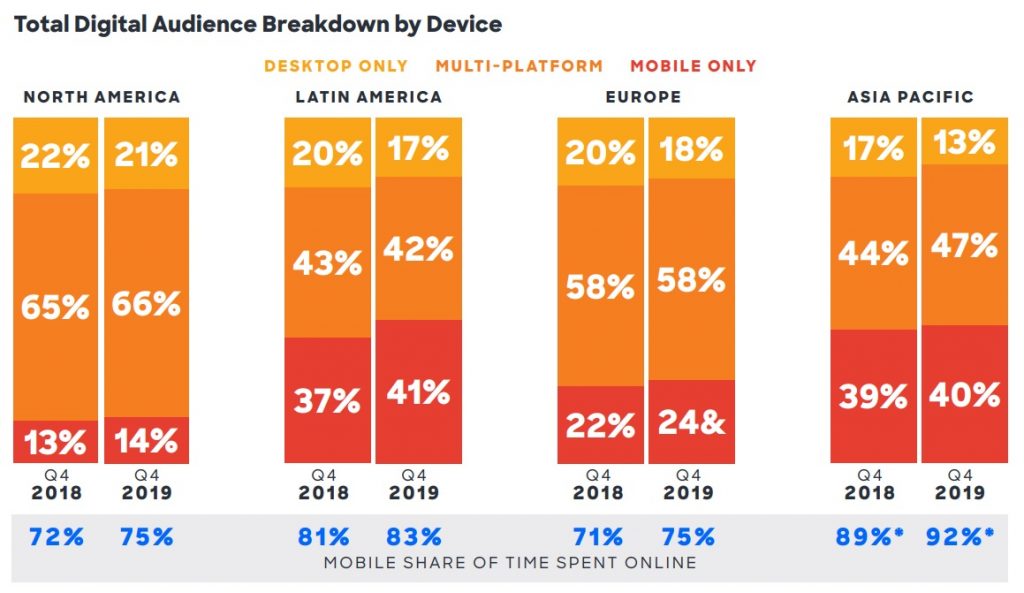 Consumers are using mobile more often when purchasing online, but how are they paying for those online purchases? Are mobile wallets replacing more traditional payment methods? Based on the 2019 study, the answer to that is multi-faceted.

Of this region, India may show the highest penetration, but Japan is the main driver for the increase in Q4. This increased adoption has been spurred by recent government incentives, aggressive marketing campaigns by the likes of Rakuten Pay, PayPal and Line Pay, and the newly formed Mobile Payment Alliance (MPA) rolling up new members.