Regulations and ongoing rollouts of contactless terminals at POS are boosting card acceptance networks, with cardholders throughout Europe increasingly using their cards for low-value payments – regulatory factors are playing a key role in increased card acceptance; the number of card‑accepting outlets grew by 9% during 2018, to reach a total of 13.3 million.

One country where growth has been particularly strong is Russia, according to RBR’s new report. Here, legislation requiring merchants with an annual turnover of over €540,000 to accept card payments came into force in 2017, driving a 22% surge in the number of outlets where cards could be used in 2018. In 2020 the threshold was lowered further to €270,000, and the Russian government is set to make card acceptance obligatory at all outlets by 2023.

Meanwhile, the number of Greek merchants accepting card payments has increased five-fold since 2014, fuelled by limits on cash usage and the government mandating card acceptance for certain business categories, as part of wider initiatives to improve tax collection and encourage cashless payments. 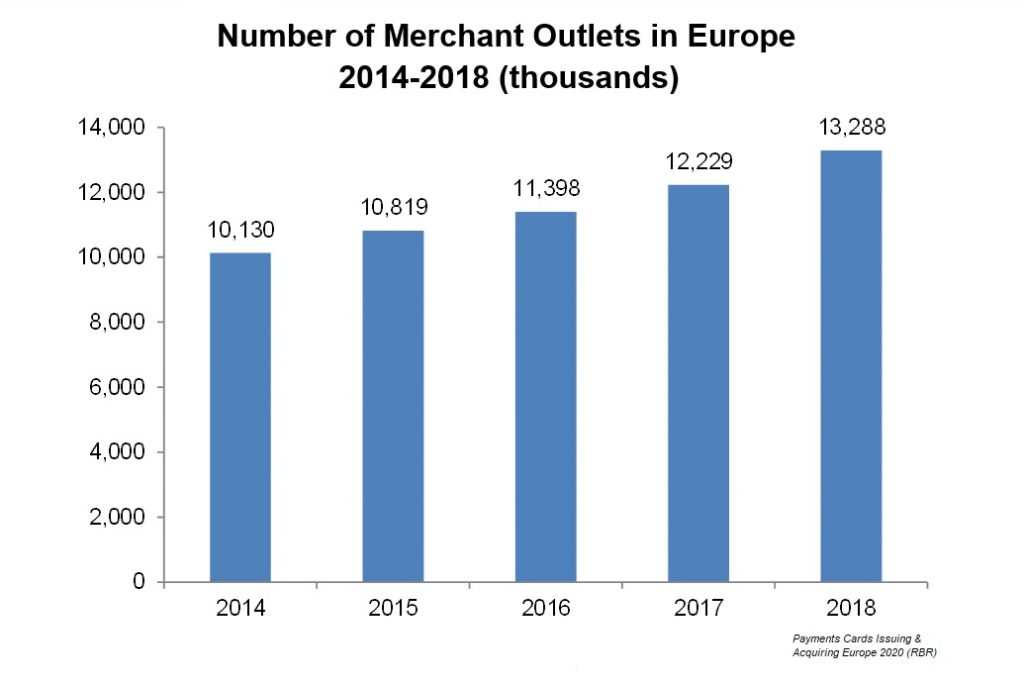 The report shows that Poland and Ukraine also saw strong growth, with a 20% rise in outlets, driven by increasing support from governments and industry players in promoting cashless payments.

These efforts have encouraged more customers to pay regularly by card, and they increasingly expect to be able to do so, even for small-value payments – merchants who do not accept cards risk losing business as payment preferences change.

Contactless technology is increasingly prevalent across Europe and the number of contactless-enabled terminals across the 25 European countries covered rose by a quarter in 2018, to 15 million. Indeed, contactless card payments are now accepted at three quarters of the region’s terminals.

Such progress can largely be seen as a result of Visa and Mastercard mandating European terminals to be contactless-enabled by 2020. Contactless is popular not just with customers, but also with merchants, who prize transaction speed. Even in the UK, where contactless technology is well-established, the number of these terminals rose by 25% in 2018.

The research shows that the introduction and expansion of contactless technology, coupled with new regulations, have served to shift consumer behaviour and expectations. Continued growth in the number of card-accepting outlets which enable contactless payments, in response to increasing customer demand, will lead to further rises in both the number and volume of acquired payments across Europe in the years ahead.