Ant Group, who’s plans to go public were recently dented, and Tencent Holdings continue to hold the lion’s share of the mobile payments market in China, based on the 2020 edition of the Asia Consumer Insights survey from Kagan, which is part of S&P Global Market Intelligence.

Each of their payment apps saw a 95% adoption rate among respondents. Besides having a customer base that frequently uses their apps for everyday transactions, the two wallets have become the payment rails supporting many e-commerce, ride-hailing and food-delivery platforms.

China UnionPay, the country’s largest card scheme, had a lacklustre performance in the 2020 survey. UnionPay’s adoption rate dropped to 38% this year from 45% in 2019.

Still, UnionPay’s QuickPass app may yet be the strongest contender representing the banking industry. An additional two more payment platforms were added to the survey this year: QQ Wallet (19%) and Du Xiaoman Pay, formerly known as Baidu Wallet (10%).

Unlike nonbank payment providers, UnionPay does not offer value storage and instead provides a digital representation of cards.

Transactions occurring through closed-loop payment platforms owned by nonbanks bypass card rails and keep banks out of the loop.

It is through UnionPay that banks have the best shot at mitigating the disintermediation risk arising from Alipay and WeChat Pay, and deepening the engagement of bank cards.

Like nonbank apps, UnionPay’s app leverages the popularity of QR codes, which allows users to pay by scanning codes on a printed sheet or payment terminal screen.

It also supports payments through NFC applications such as Apple Pay and Huawei Pay. NFC payments require merchants to install expensive point-of-sale terminals, however, and tend to be less popular than QR codes among merchants.

While banks offer their own mobile apps, only 19% of respondents revealed usage of credit card apps or bank apps. Neither UnionPay nor any of the country’s four largest banks by assets match the popularity of Alipay and WeChat Pay.

UnionPay’s QuickPass app had registered users of over 300 million in August. Agricultural Bank of China had 310 million users at the end of 2019, of which only 72 million were active monthly. 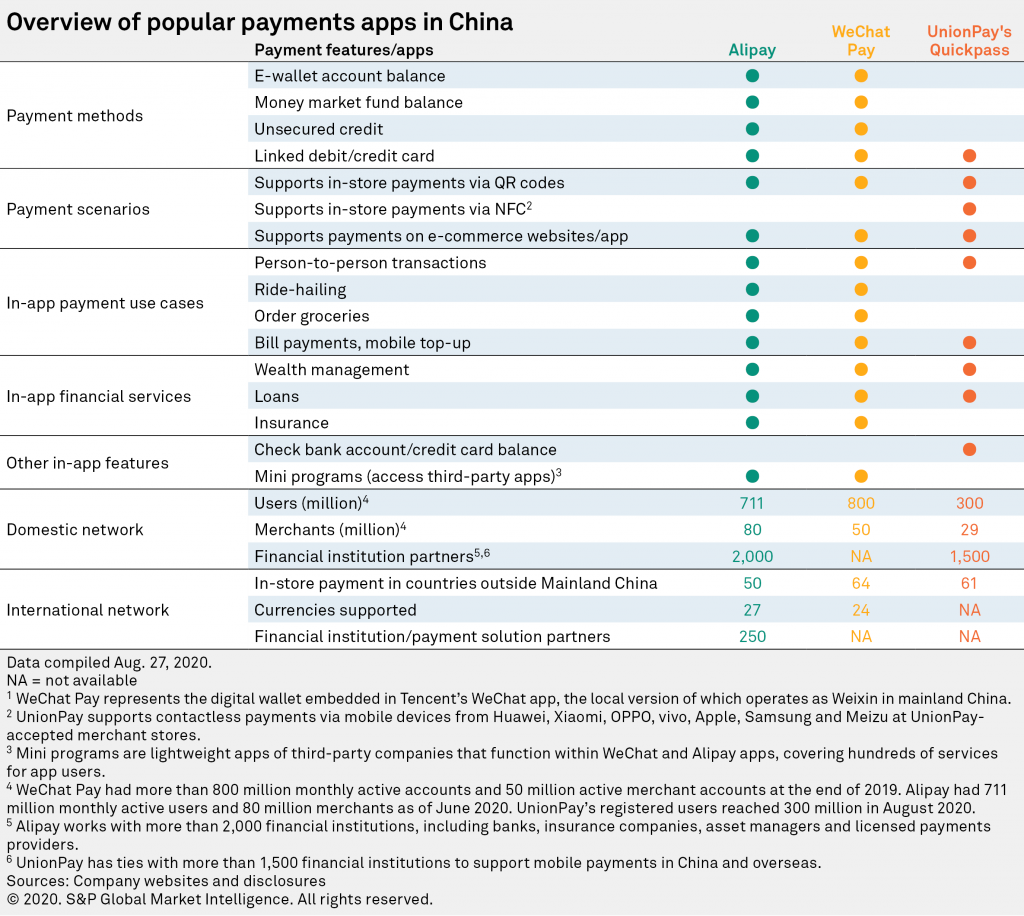 WeChat catching up with Alipay

Alipay, launched in 2004, has in the past held the upper hand over WeChat Pay. For instance, 94% of respondents polled in the 2019 survey revealed Alipay usage, whereas WeChat Pay’s adoption came in slightly lower at 90%.

The Tencent-owned wallet, however, has closed the gap in our latest survey. Further, Tencent may have already surpassed Ant Financial in terms of number of users if we take into account the user base of both QQ Wallet and WeChat Pay, the embedded payments features in Tencent’s QQ and WeChat messaging apps, respectively.

This comparison between Alipay and the Tencent payment platforms, however, is fraught with a few problems.

Due to its historical ties with popular e-commerce and retail merchant ecosystems, Alipay has always had a relatively greater focus on consumer-to-merchant payments.

WeChat Pay, on the other hand, started primarily offering person-to-person payments, with its “Red Packet” service, launched in 2014, quickly becoming a popular way of gifting money around the Chinese New Year.

Tencent managed to grow the share of commercial payments to more than 50% of its payments volume over time by building ties with online and offline retailers.

Still, industry estimates put Alipay ahead of the combined Tencent platforms in terms of payments usage.

Both are increasingly tethered to China’s growing digital ecosystems. Several ride-hailing, food-delivery and e-commerce services often provide Alipay or WeChat Pay as payment methods on the checkout pages of their websites or in apps.

About 70% of 6,589 billion yuan in gross merchandise value generated through Alibaba Group retail marketplaces, including T-mall and Taobao, in China was settled through Alipay’s escrow and payment processing services, in the financial year ended March 31, 2020.

Ant Financial, in which Alibaba holds a 33% stake, co-invests with its erstwhile parent in digital companies in China and around the world, often extending Alipay’s payment processing capabilities to investees.

Tencent’s appeal as an investor partly lies in the popularity of mini-programs within WeChat, which allow users to access lightweight apps of digital services without having to install them on their phone devices.

WeChat Pay becomes the preferred payment method for users making purchases through mini-program apps. Tencent holds equity stakes in JD.com, Meituan Dianping and Pinduoduo, among others, many of which leverage WeChat as a distribution and payments partner.

Both Alipay and WeChat Pay generate growth by attracting new users as well as cultivating frequent transactional habits among their existing ones. Their success in building high-frequency platforms has spawned a host of “super app” aspirants within China and outside.

Most of the payment platforms surveyed in China reside within super apps of companies whose business interests range from e-commerce to food-delivery services. While there is no consensus on what super apps are, the survey defines them as all-in-one apps that offer a variety of services through mini-programs or mini-apps.

Digital payments are integral to the success of super apps because they facilitate the introduction of services while ensuring that users stay within the super app ecosystem. It is no surprise then that mobile payments emerged as the top activity for super apps in the survey (87%).

Users of most payment platforms reported high engagement for mobile payments (around 90% considering the margin of error), with Du Xiaoman Pay users being a notable exception (80%).

Both Ant Financial and Tencent have been offering adjacent financial services like micro-credit and insurance through their popular apps.

The survey results show that insurance was on the minds of super app users in the wake of the pandemic. More than 11% of digital payment users disclosed the purchase of an insurance product through a super app in the 30 days prior to taking the survey.

WeChat Pay rolled out COVID-19 related coverage plans for customers and merchants in partnership with WeSure. Tencent’s insurance platform, which works with AXA SA, had added 25 million active users during the pandemic as of March 13.