Outside of the Nordics, BLIK, the Polish mobile payments super app is perhaps the next best performing digital payments “standard” at a domestic level.

In Q4 2020, BLIK users in Poland performed 140 million transactions, with over 420 million throughout the year. At the end of the year, 7 million people were actively using the mobile payment system.

BLIK is available to virtually all mobile banking customers and can be used not only in for domestic e-commerce, but also in a growing number of global platforms. The fastest growing feature is transferring money to a phone number, i.e. the ability to transfer money instantly P2P.

Out of the record 140 million transactions carried out in a single quarter, as many as 105.5 million were purchases via e-commerce. This is twice as much as in the corresponding period in 2019. Online transactions account for three-quarters of all BLIK operations.

According to the estimates of the Polish Payment Standard, BLIK’s share in all e-commerce payments on the Polish market exceeds 60%.

The second most frequently used channel among users are transfers to the BLIK phone number. The year-on-year increase in this category is as much as 167%. The total number of transactions was 15.5 million (compared to almost 6 million a year earlier).

At this time ten banks are already offering their customers the option to immediate transfer money from account to account without having to enter a bank account number. 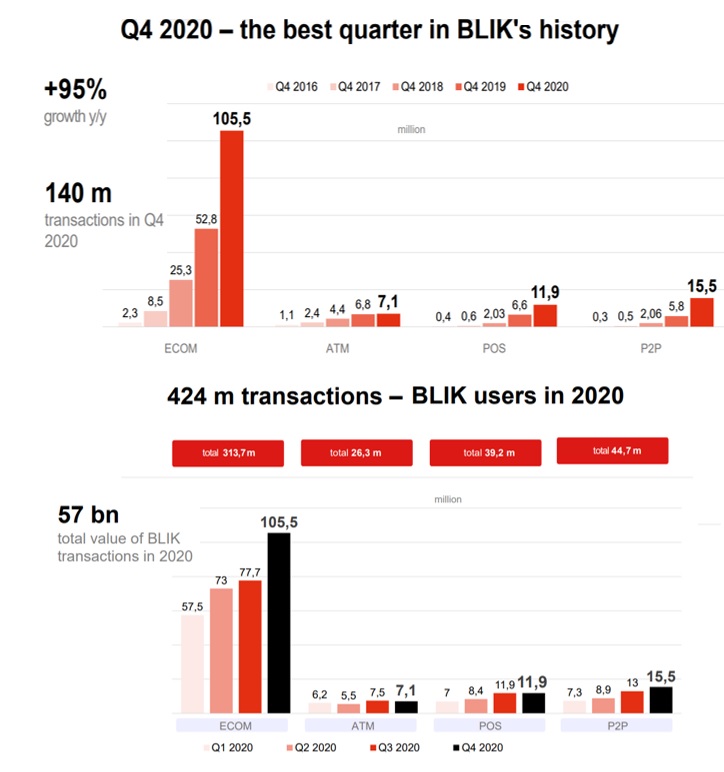 “In our opinion, cashless, instant and secure transactions between users are currently the biggest trend not only on the Polish market, but also the European payment market. This is the best way to transfer money, not only because of the coronavirus pandemic,” says Dariusz Mazurkiewicz, CEO of the Polish Payment Standard, BLIK’s operator.

“We predict that transfers to a phone number may soon become the main form of transferring money between people.”

In the last quarter of last year, transactions through traditional payment terminals were also very popular among BLIK users. These increased significantly in H2 2020 – nearly 12 million transactions were made through this channel. That’s about 80% more than in Q4 2019.

The decreased interest of users in cash payments is evidenced by the number of BLIK transactions at ATMs. In the last three months of the year, there were 7.1 million of them.

Although this is a slight increase year on year and in Q4 there were fewer such transactions than in the previous quarter, the share of BLIK in ATM transactions is systematically growing.

Withdrawals and deposits at ATMs accounted for 5% of all BLIK transactions. It is worth noting that before 2019, ATMs were second, after e-commerce, where BLIK was most often used.

In Q4, Poles made an average of 1.5 million BLIK transactions every day. The record number of daily transactions is nearly 2.4 million.

The best year in BLIK history

“We are very quickly approaching the first billion BLIK transactions, which will be a kind of symbolic achievement for us after 6 years of our presence on the market. The total value of BLIK transactions from February 2015 to the end of 2020 amounted to nearly PLN 105 billion. We have become the undisputed leader in e-commerce,” says Mazurkiewicz.

“According to the NBP data, the number of online transactions is already more than twice as high as those made with cards. Our ambitions go further, which is why we continue to work hard to ensure that BLIK can be used to pay anywhere in the world, wherever our users want to shop.”