PCM Feature: The future of credit cards for the digital era

Credit cards are becoming less profitable for banks even as lower-cost alternatives such as buy-now-pay-later schemes and digital wallets with a credit function are emerging. If credit cards are to survive, what will they look like and how will they be used?

There are markets in the world – such as Germany and Japan – in which credit cards have never been that popular for cultural reasons. In other markets like the US and UK, they’ve proven wildly successful, and arguably form part of the way people remember the 1980s through advertising campaigns that wouldn’t leave home without them, being our flexible friends and so on.

Across Europe, the latest data from PCM’s Digital and Payment Card Yearbooks reveals the number of credit cards grew at less than one-third of the rate enjoyed by debit cards. At the same time, credit card use has increased just half as fast as debit card use in the last five years.

In part, this is due to consumers’ reduced willingness to take on debt after the Great Recession of 2007-2008, with consumer debt in the US hitting a 20-year low as late as 2016, then declining a further 20 percent during the recent pandemic.

“Credit card numbers grew by one-third the rate of debit cards, while credit usage declined by 20 percent during the pandemic.”

Consumer nervousness at taking on debt is just one factor behind the reduced popularity of credit cards: the emergence of viable alternatives to plastic credit is another.

Giving credit to other options

Apple caused a minor stir in the industry two years ago when it launched a virtual credit card with Goldman Sachs, attempting to lure consumers with the promise of no annual fees and two percent cashback on all purchases plus an account management app which Apple claims minimises the amount of interest consumers pay.

In a late 2020 earnings statement, CEO Tim Cook said Apple’s virtual card had been “the fastest credit card roll-out in history”, and declared the company “happy” with both the number of users and business volumes on the card, despite – tellingly – not releasing discrete information on the product’s performance.

The fact that Apple have had to increase the cashback rate to three percent and widen the range of repayment options for the card says more about its success (or otherwise) than any CEO gush – and shows just how competitive the credit card market has become.

Buy-Now-Pay-Later (BNPL) schemes such as Klarna and Afterpay pose the biggest immediate threat to credit cards, especially for online purchases.

According to estimates from Kaleido Intelligence, BNPL schemes will see spending rise to $350 billion globally by 2025 – only 10 percent of the global total for credit cards, but still up sixfold in the last seven years compared to 4 percent long term growth in the credit card market.

Superficially at least, it’s not hard to see the appeal of BNPL schemes from a consumer perspective. For low-value purchases on defined repayment terms, such schemes require much less stringent credit checks than cards, and offer the lure of interest-free payments.

That said, Klarna’s “financing” option for longer-term repayment is no cheaper for consumers than a traditional credit card – in addition to which, acceptance outside cyberspace and especially across borders remains a real problem for BNPL players.

While many digital wallets are linked to credit cards, their continued rise in recent years raises the possibility of purchases via digital wallets being linked to an overdraft or line of credit secured against a fixed asset such as real estate.

This option is significantly cheaper for consumers at around five percent over base rates, compared to credit cards at up to fifteen percent over base. As yet, however, such options remain relatively unexplored, perhaps because of the traditionally rich profitability of credit cards. However, the credit card’s renown as a lucrative profit centre is declining, while risks and costs keep rising.

Costs up – and risks rising…

According to recent reports in the FT and elsewhere, credit card profitability at major issuers like Citigroup declined between 18 and 20 percent last year, due partly to lower business volumes during the pandemic.

Across the board, major US banks saw profits decline between 30 and 60 percent as consumer appetite for taking on loans decreased. 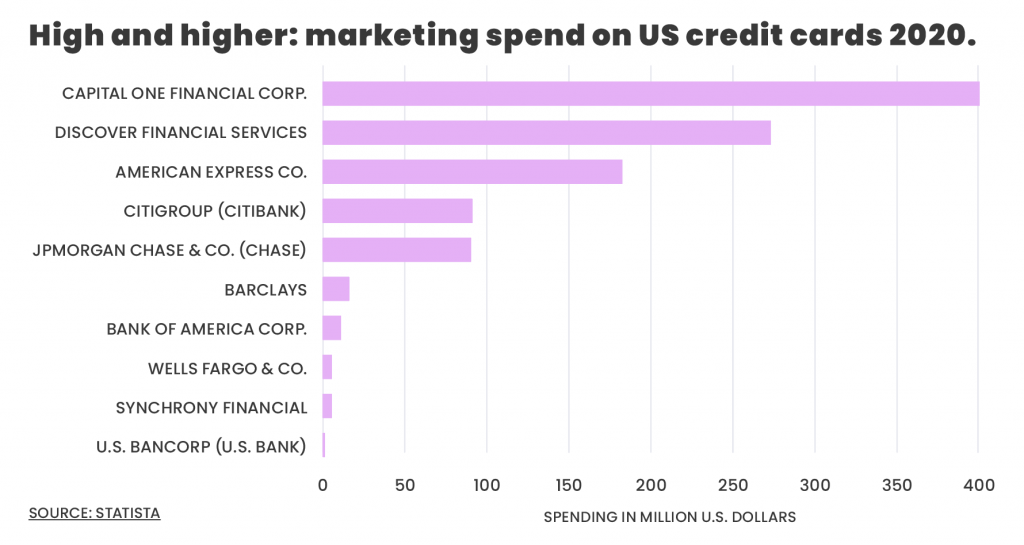 However, this is just part of the story: the truth is that bad debt costs, high and rising fraud risk, expensive legacy systems and costly reward programmes are combining to make the credit business less attractive to banks.

“Credit card profitability plunged by up to 20% last year for major banks.”

Considered collectively, the top five issuing banks in the US spent more than a billion dollars advertising credit card programmes last year – around five percent of total market value for credit cards. However, this does not include PR costs, or the high and rising cost of reward programmes to incite customer usage.

Such reward programmes matter because – as of Q2 2021 – around a quarter of US credit card customers don’t use their card at all, while a further third pay off their balances in full each month, meaning no interest is charged.

This means banks are trying to make profit from interchange, annual fees, and interest charges from just one-third of their customer base at a time when, according to the American Bankers Association, 2021 purchase volumes are still slumped at 2016 levels.

Delinquency and fraud: from bad to worse

According to a mid-2020 report from Accenture, banks around the world should be making record levels of provision for bad debt as COVID-19 recedes.

Accenture predict that banks could suffer up to 2.5 percent of the total value of their loan books as bad debt losses in the next eighteen months – in real terms, as much as $460 billion in Europe and $310 billion in the US.

Meanwhile, credit card fraud continues to rise, especially in the card-not-present (CNP) channel that covers e-commerce; according to Shift Credit Card Processing, almost one trillion US dollars ($971 billion) was lost world-wide to credit card fraud last year, of which around 21 percent came from e-commerce fraud and 41 percent from telephone “phishing” scams.

And if that’s not enough, many incumbent banks are operating multiple credit card platforms which, in some cases, pre-date the internet and the advent of mobile commerce.

Overcoming this technical hurdle requires banks to either code their own new solution, adapt a commercial off-the-shelf model and transfer their card programmes to that model, or outsource their card platforms to a third party via the cloud – all with the objective of upgrading their systems for the digital era.

Since many of their neobank and FinTech competitors don’t face the same legacy technology issues, incumbents are at a significant disadvantage and should consider their options carefully.

Industry experts consulted for this article shared a consistent vision of the future for credit products. While all agree the credit market will become more diverse, with BNPL and credit lines playing a role, they also believe credit cards will continue to have a major part to play, especially for certain market segments such as high net worth individuals and, remarkably, the sub-prime segment. 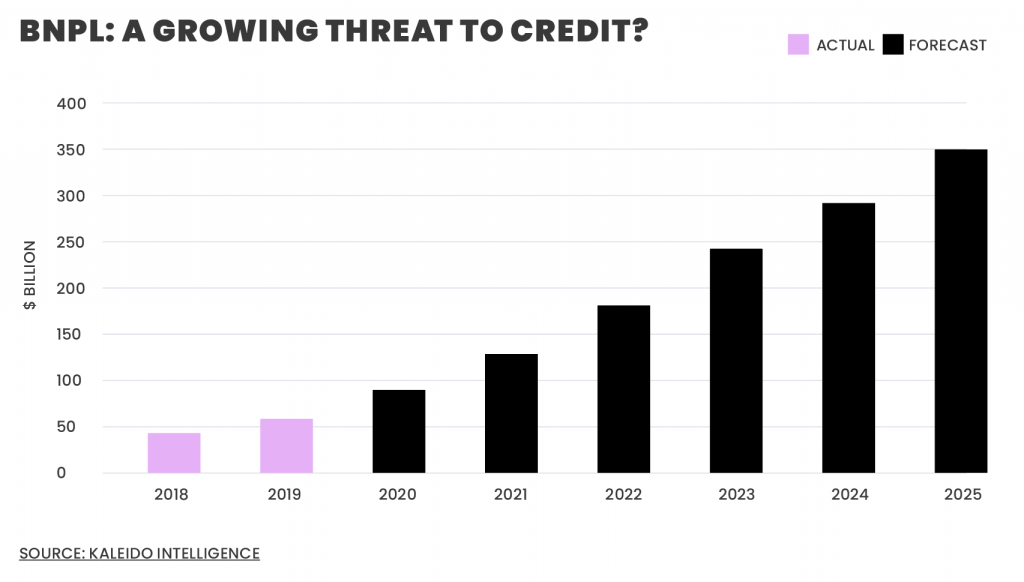 For Paul Siegfried, SVP at global data solutions firm TransUnion, there will always be a need for revolving credit products that allow flexibility in managing purchases. Siegfried says the utility of a credit product “depends on a few key questions – thinking about merchants, for instance, will the product deliver increased transaction numbers and higher transaction values?”

For Siegfried, it’s all about the right product for the right market segment – and he notes that both Gen Z (born after 1980) and millennials are comfortable with the concept of credit, and actively pursuing it – whether through BNPL, credit cards or other means.

Ahmed Karsli, CEO at Papara, one of Turkey’s biggest neobanks, agrees with this view, stating that he sees credit cards evolving alongside BNPL and other options.

Karsh says, “the next five years are going to be all about various payment options backed up by a credit facility – and this situation is going to be payment rail agnostic. For instance, consumers might select a credit card for international transactions and a BNPL product for lower-value domestic transactions.”

That said, Karsh is adamant that user experiences, which are currently too fragmented, need to improve across the board.

Improving user experiences is going to be vital if credit cards – and other credit products – are to compete with the new wave of “super-apps” – multi-function digital wallets that span everything from current accounts and insurance to loyalty schemes and credit and debit products.

This is a point not lost on Ivo Gueorguiev, Co-founder of e-money institution Paynetics. Gueorguiev believes “credit cards will continue to exist – although their importance may decline.

What will matter is the capacity to embed the credit option into many payment environments and develop a full picture of how a customer spends their money which, in turn, helps to build a relationship.”

Alongside this move, Gueorguiev believes we’ll see a restructuring of the charging structure for credit cards which could involve merchants paying lower interchange fees for using credit products as one of a range of payment options.

“Credit cards will continue to exist – although their importance may decline. What matters the capacity to embed credit into multiple environments.”  – Ivo Gueorguiev, Paynetics

In summary, cards need to become more flexible and multi-functional to compete with tomorrow’s super-wallets. In doing so, the walls that currently exist between the revolving credit function of a card on the one hand, and a micro-loan or a BNPL product, are likely to disappear.

As Tommy Sveum, Product Manager at IT software and service company TietoEVRY’s card unit puts it, “As a result of digitalisation, new payment and lending platforms now offer new and combined financing such as revolving credit, installment loan, and By-Now-Pay-Later for transactions performed with a single card.

This means that a customer can have one payment method with multiple financing options. Cards will continue to be a substantial digital payment option in the future, as it is the only option that supports the increase in international purchases unlike new payment options such as account-to-account (A2A).”

As is widely accepted, recovery from the pandemic is going to be about digitisation in payments. That said, another word that came up regularly in researching this article is democratisation – offering consumers more choices about how they pay.

For the credit market, the implication is we’ll see BNPL and credit lines sit alongside credit cards in a consumer’s wallet – and likely on the same card or device. At the same time, we could see banks implement a range of measures designed to drive efficiency and save costs in their card operations, such as rationalising card platforms.

After all these changes, it will be interesting to see whether the credit business ever retains the dizzy heights of profitability it experienced back when Ah-Ha ruled the airwaves and soccer players had long hair.

The post PCM Feature: The future of credit cards for the digital era appeared first on Payments Cards & Mobile.