Open Banking hits four – are we open for business?

It’s been four years since UK regulators fired the starting gun on Open Banking, followed closely by the EU and 36 other markets world-wide. As a major new study into Open Banking in Europe is published, we look at progress to date – and promise for the future.

When UK regulators launched Open Banking in mid-2017 following a review by the Competition and Markets Authority (CMA), the idea was to empower consumers to take control of their financial data while stimulating competition. The EU followed suit in January 2018, promising to give consumers greater freedom of choice and control of their financial futures through the Second Payment Services Directive (PSD2).

In Europe at least, that’s not hard to understand, as Open Banking has faced a wide range of challenges. To start with, individual markets need their banks to open up their Application Programming Interfaces (APIs) to enable dialogue with other banks, FinTechs and other providers. While most have completed this process, establishing API standards within and between markets remains a challenge.

Then there’s digital readiness. To function effectively, Open Banking needs a technologically savvy and digital-ready economy. As the graph from Mastercard’s new study powered by PCM, the “European Open Banking Readiness Index 2021” shows, this basic requirement is still in development across much of Europe. Finally, there’s the issue of encouraging consumer use of Open Banking: while regulators and banks might be enthusiastic, the idea of using your mobile phone company or utility provider as a bank will take some getting used to. And all these problems don’t even touch on the need for a comprehensive digital ID standard – something that’s lacking in most European markets.

Nordics: The winner takes it all

Nordic markets have been trailblazers in Open Banking, and the new PCM/Mastercard readiness index ranks them as European leaders, given the high degree of digital infrastructure across Sweden, Norway, Finland and Denmark. As is widely known, these markets have the highest penetration of non-cash transactions anywhere in the world. What’s more, their approach to Open Banking has been characterised by dynamic collaborations between banks and regulators across these markets.

The Nordic Know Your Customer (KYC) initiative, Invidem, is one example of this kind of collaboration. By creating a common platform for Nordic banks to collect and manage customer data, Invidem claims to improve transaction security and provide a significant competitive advantage for Nordic banks against global players such as Apple Pay and Google Pay.

At the same time, some Nordic markets have introduced the effective BankID system to solve the problem of consumers having to give permission for use of their data by different providers in the Open Banking ecosystem. In what may be a model for the rest of the world to follow, BankID allows consumers to control access to their data via a “control panel” – including their financial and social security information, as well as data from healthcare providers. Consumers get full control of their data, while trusted providers use this platform to confirm user identity and enhance security for everything from instant payments to government benefits.

The PCM/Mastercard study accords the UK its own rank in European Open Banking. While the UK sits behind the Nordics thanks to the absence of a coherent digital ID for consumers, the country’s performance has otherwise been impressive. Kanika Hope, Chief Strategy Officer at banking software provider Tenemos, describes the UK’s approach as “pioneering.” For Hope, the path towards Open Banking will be more evolution than revolution: “[The advent of] Open Banking is encouraging new use cases for both consumers and SMEs. It’s all about meeting unmet needs, and creating value.”

According to the latest figures from OBIE, the UK’s Open Banking Implementation Entity, there are now 109 regulated entities in Britain with at least one live Open Banking product. Taken overall, 307 regulated financial services businesses in the UK and 223 Third Party Providers (TPPs) are joining forces with 84 non-financial companies to create new Open Banking opportunities – more than in any other European country.

“There are more live Open Banking products in the UK than in any other European country.”

According to Nick Raper, Director of Nuapay UK, a provider of account-to-account transaction processing platforms, the UK’s success is due in part to the fact that it started its Open Banking journey some 18 months ahead of European countries. Raper says the UK also took a different approach, mandating stricter guidelines relating to the customer experience. “We’re now beginning to see adoption and product roll-outs across Europe”, he says. “Standard API sets like STET in France, the OpenAPI set from the Berlin Group, and Poland’s PolskiAPI are coming through. At the same time, Banking-as-a-Service propositions are moving fast to market.”

While it’s hard to generalise regarding approaches to Open Banking in Western Europe’s major economies, the new study from Mastercard/PCM ranks France, Italy and Spain slightly behind the UK in their progress towards Open Banking, with the Berlin Group leading the way for the DACH countries (Germany, Austria and Switzerland) and other European markets. In part, this is because account-to-account payment systems are at a lower level of readiness compared with the Nordics and the UK, and also because high-speed internet in some of these markets is behind the 4G and 5G systems found in the Nordics and the UK.

On the positive side, the Berlin Group has typified a collaborative approach to the development of Open Banking in German-speaking markets and adjacent countries. Founded specifically to develop collaborations between European banks after PSD2, the Berlin Group has developed NextGenPSD2 as a single open API standard for its member banks. Within Germany itself, banks are using the established FinTS open API set to enable trusted third parties (TPPs) to access customer data and create new products. There are signs of real movement in the German market, with some 23 TPPs granted licenses in 2020 – far behind the UK and Nordics, but progress nonetheless.

“France, Italy and Spain are using Open Banking as a springboard to modernise their payments systems.”

Europe’s Latin markets – France, Spain and Italy – have historically seen less collaboration in their banking and payment systems. Notable exceptions include the French “Carte Bleue” system and, most recently, a merger between Spain’s three payment systems to create a unified payments infrastructure, SistemaPay.

History aside, evidence suggests Open Banking is acting as a springboard for these markets to modernise their payment systems. In France, bank-owned processor STET has created an open API set for the country’s banks to enable third-party providers, and now France is moving towards its first Open Banking implementations, including Lyf Pay, a multi-bank and retailer digital wallet that uses QR codes to trigger payments and can be loaded either from a card or a transfer direct from account.

While Italy has consistently had a dynamic approach to new mobile internet standards, being one of the first European countries to auction its 5G licenses, there has to date been more modest progress on inter-bank collaboration for Open Banking. Two of Italy’s largest processors, NEXI and SIA, have launched instant payments services for their banking clients, and individual banks have begun to operate with TPPs to open their API sets for specific services. As a pan-bank initiative, perhaps Jiffy, a peer-to-peer money transfer system, shows the greatest promise as the basis for a suite of wider Open Banking services in Italy.

A similar situation exists in Spain, where the country’s banks have led the merger of three payment networks and launched a new immediate payment scheme, Bizum. However, there’s still no widely-accepted domestic open API, with major banks opening their APIs to other entities on a staggered and piecemeal basis.

Central European states like Poland are also showing signs of movement. Poland’s banks have launched a domestic API standard, PolskiAPI, to enable TPPs to access customer data. Although Poland boasts advanced digital readiness in terms of its 5G internet networks and 64 percent smartphone penetration, consumers tend to shop less online than in Western Europe, and digital banking penetration is lower, at just 49 percent of all consumers.

That said, Poland was one of the first European countries to launch a domestic digital payment scheme over a mobile device in 2017 – and the country is showing real enthusiasm for a fully digital payments infrastructure.

Elsewhere in Central Europe, the absence of collaborative approaches and a single domestic API standard continues to hamper progress – although multi-function mobile banking and payment apps from players like Erste and others provide evidence of progress, as do the smattering of licenses provded to FinTech TPPs by central banks in the region.

“Low levels of inter-bank collaboration and a lack of open API standards is hampering progress in Central Europe.”

While the new study from PCM and Mastercard does not cover the US or Canada, questions will inevitably be asked as to how Europe’s progress compares with other regions, including Asia and North America. 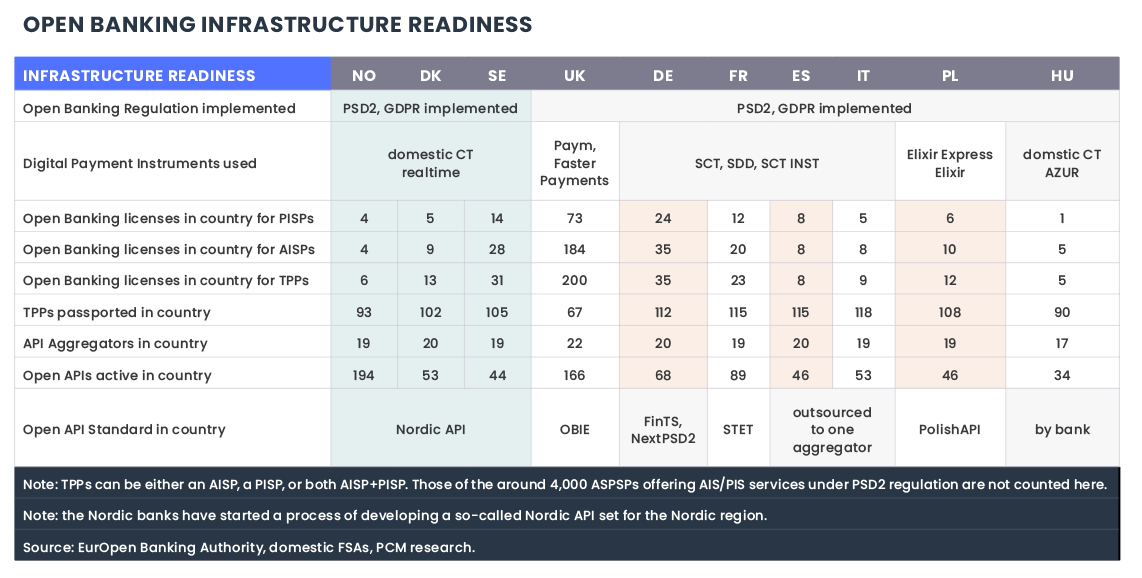 Canada’s highly concentrated banking market has long boasted a peer-to-peer instant payments scheme. However, the government’s official position is that it is “actively considering ways to safely introduce Open Banking in Canada” – although it notes the prevalence of screen-scraping as a current work-around for third party providers to access permissioned consumer banking information.

The Canadian government has begun a multi-phase review of Open Banking in Canada, with the next stage due to complete later this year. Safety for consumers is being given paramount importance – perhaps accepting some degree of risk would enable Canada’s banking system to modernise more rapidly.

As to the United States itself, the approach to Open Banking is characteristically American: allow the market to lead developments. The US Federal Reserve only recently launched a Faster Payments initiative for industry, set to go to market by 2024.

Part of the problem with a market-led approach is that some key market players have the most to lose from opening up financial services. However, John Pitts, Head of Policy at FinTech payments unicorn Plaid, says the late start to Open Banking in the US could prove a benefit: “the US is looking more at the road to open finance – including investing, insurance and the mortgage market – rather than current accounts and payments alone.

Part of that journey is going to be about permissioning and re-permissioning consumer data between platforms.” To help that process, Plaid is trialling a consumer-controlled data permissioning dashboard that would allow consumers to directly control which third parties have access to their data.

While Europe’s economies are the most developed outside Asia when it comes to Open Banking and significantly ahead of their North American peers, some familiar European challenges are beginning to manifest, including lower-than-hoped levels of compliance with existing regulation and poor collaboration in some individual markets. That said, the Nordic markets and to a lesser extent the UK provide examples of what can be done. It may be that the advent of the European Payments Initiative, led by the continent’s banks, plus further revisions to PSD2 in the coming years will act as a catalyst for the further development of Open Banking. For the moment, there’s evidence of much progress – but still some way to go before Open Banking’s promise is fully realised. 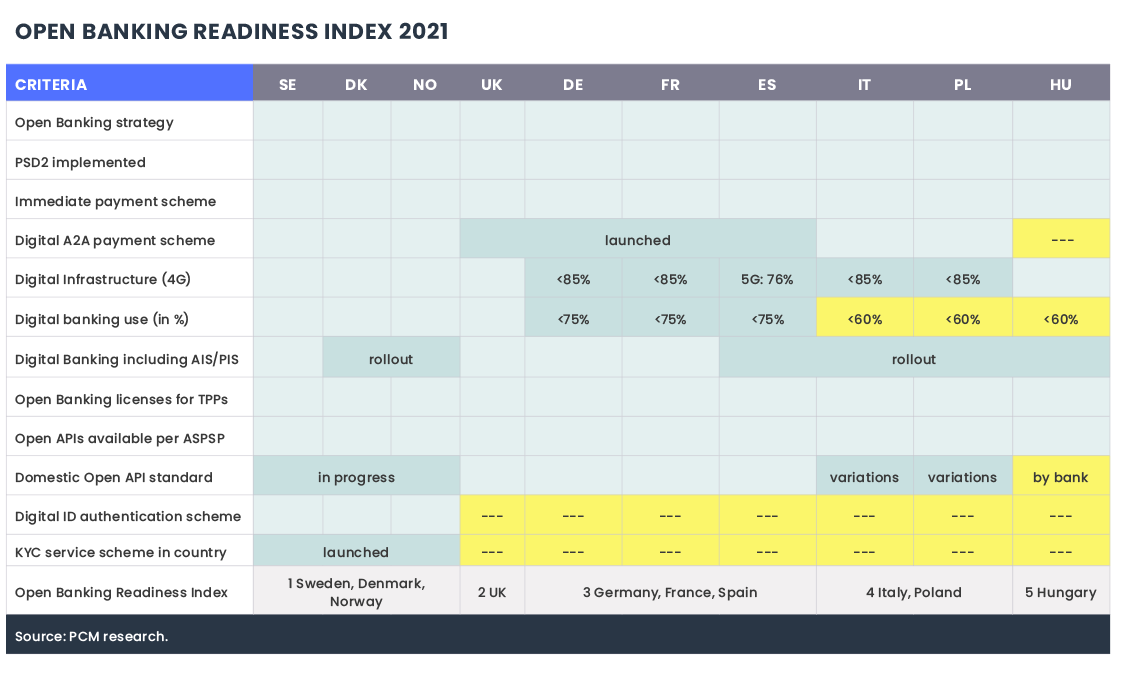